Reconsidering the Business of Death. Death is big business. 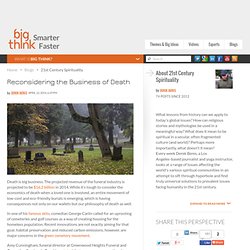 The projected revenue of the funeral industry is projected to be $16.2 billion in 2014. While it’s tough to consider the economics of death when a loved one is involved, an entire movement of low-cost and eco-friendly burials is emerging, which is having consequences not only on our wallets but our philosophy of death as well. In one of his famous skits, comedian George Carlin called for an uprooting of cemeteries and golf courses as a way of creating housing for the homeless population. Recent innovations are not exactly aiming for that goal; habitat preservation and reduced carbon emissions, however, are major concerns in the green cemetery movement.

Amy Cunningham, funeral director at Greenwood Heights Funeral and Cremation Services in Brooklyn, stated that every year conventional funeral businesses use 104,000 tons of steel building caskets, ‘enough to rebuild the Golden Gate Bridge.’ Cremations have long been the more expedient and affordable alternative. How the Brain Chooses Between Doing What We Should and Doing What We Want. 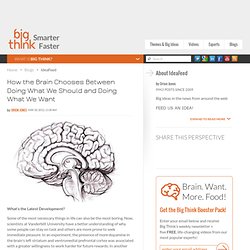 Some of the most necessary things in life can also be the most boring. Now, scientists at Vanderbilt University have a better understanding of why some people can stay on task and others are more prone to seek immediate pleasure. Are You A Paster, Presentist, Or Futurian? Instead of differentiating people on the basis of their “religion” (as Christians, Muslims, Hindus, etc.), what if we differentiated people according to their temporal orientation? 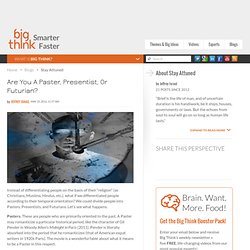 We could divide people into Pasters, Presentists, and Futurians. Let’s see what happens. Pasters. These are people who are primarily oriented to the past. A Paster may romanticize a particular historical period, like the character of Gil Pender in Woody Allen’s Midnight in Paris (2011). The American Founders were Pasters in a related sense.

Preoccupation with some “Golden Age” seems to characterize many Pasters: back then people were more virtuous, more interesting, life was more intense, consequential, and profound. How to Generate a Good Idea. Several years ago, Tom DeMarco and Timothy Lister conducted a study that measured the productivity of computer programmers. 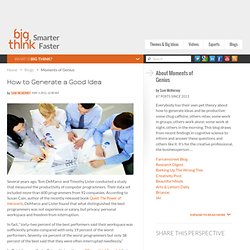 Their data set included more than 600 programmers from 92 companies. According to Susan Cain, author of the recently released book Quiet: The Power of Introverts, DeMarco and Lister found that what distinguished the best programmers was not experience or salary, but privacy: personal workspace and freedom from interruption. In fact, “sixty-two percent of the best performers said their workspace was sufficiently private compared with only 19 percent of the worst performers.

Seventy-six percent of the worst programmers but only 38 percent of the best said that they were often interrupted needlessly.” In Quiet, her manifesto, Cain criticizes the new “Groupthink” model that she says dominates our schools and work places. Social scientists have known this for years. The lesson? The second example comes from a 2010 study by Harvard Medical School researcher Isaac Kohane.

Will Technological Change Lead to Abundance or Extinction? William Ackman on the Psychology of the Successful Investor. Following the meltdown of the financial system in 2008, subsequent economic downturn, innumerable investigative journalism pieces about the big banks and investment practices, and finally the rise of the Occupy movement, it’s safe to say that finance and investing have taken a high-profile position in the mind of the public. 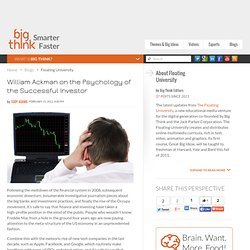 People who wouldn't know Freddie Mac from a hole in the ground four years ago are now paying attention to the meta-structure of the US economy in an unprecedented fashion. Combine this with the meteoric rise of new tech companies in the last decade, such as Apple, Facebook, and Google, which routinely make headlines with news of IPOs and stock prices, and it’s safe to say that Americans are more critical of and interested in investment practices in general.

Burton G. So what’s an individual investor to do, if even the pros can’t demonstrably do better than random chance most of the time? In this view it’s all about psychology. Life's Messy. Train Your Brain to Adapt. What's the Big Idea? 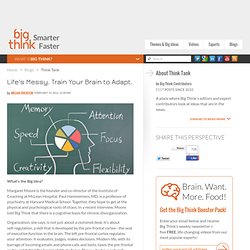 Margaret Moore is the founder and co-director of the Institute of Coaching at McLean Hospital. Paul Hammerness, MD, is a professor of psychiatry at Harvard Medical School. Together, they hope to get at the physical and psychological roots of chaos. In a recent interview, Moore told Big Think that there is a cognitive basis for chronic disorganization. Organization, she says, is not just about a cluttered desk. But the plasticity of the brain means we can all learn to be better focused and more organized. Q: Can we actually reshape our habits just by thinking? Stress is designed biologically to be powerful; it takes over your brain much more than positive emotion. What's the Significance? The quickest way to deal with stress, says Moore, is to summon a positive emotion. So why do we so often fail to stick to our organizational goals?

If you learn how your brain works and work with it, you can start to exercise more cognitive control over your own functioning.