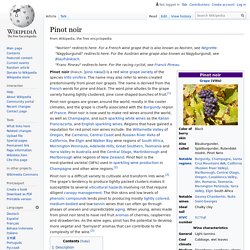 The name may also refer to wines created predominantly from pinot noir grapes. The name is derived from the French words for pine and black. The word pine alludes to the grape variety having tightly clustered, pine cone-shaped bunches of fruit.[1] Description[edit] The leaves of pinot noir are generally smaller than those of Cabernet Sauvignon or Syrah. The wine's color when young is often compared to that of garnet, frequently being much lighter than that of other red wines. However, an emerging, increasingly evident, style from California and New Zealand highlights a more powerful, fruit forward and darker wine that can tend toward Syrah (or even new world Malbec) in depth, extract, and alcoholic content. 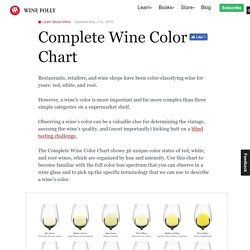 However, a wine’s color is more important and far more complex than three simple categories on a supermarket shelf. Observing a wine’s color can be a valuable clue for determining the vintage, asessing the wine’s quality, and (most importantly) kicking butt on a blind tasting challenge. Ancient drink of mead revived by new fanbase of younger drinkers. Mead, one of the world’s oldest alcoholic drinks, has been making a comeback on the back of the boom in craft beer. 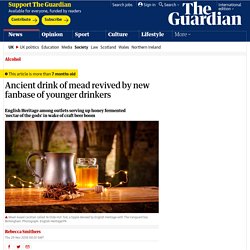 Sales of the honey-based drink have grown in supermarkets after winning a strong fan base among younger drinkers in pubs and at beer festivals. The conservation charity English Heritage claims to be the UK’s largest retailer of mead through the gift shops in its 400 historic buildings and monuments as well as online; it said it sold a bottle every 10 minutes. Sales of mead have increased by an average of 10% annually for the past three years, according to English Heritage, and between April 2018 and March 2018 the charity sold 29,750 bottles, all made by the Lyme Bay Winery,in Devon, the UK’s leading producer of award-winning meads. Mead, created by fermenting honey with water, dates back thousands of years and was once viewed as the drink of the gods, falling from the heavens as dew then gathered by bees. It was also believed to improve health and prolong life. Even low alcohol consumption is bad news for strokes – study.

A low level of alcohol consumption does not protect against stroke, new research suggests, in the latest blow to the idea that a few drinks can be beneficial to health. 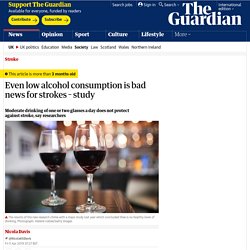 At least 100,000 people have strokes in the UK every year, according to recent figures. It had been thought that low levels of alcohol consumption might have a protective effect against stroke, as well as other diseases and conditions. Now researchers say that in the case of stroke, even low levels of alcohol consumption are bad news. “Moderate drinking of about one or two drinks a day does not protect against stroke,” said Dr Iona Millwood, co-author of the study from the University of Oxford. The results chime with a major study released last year which concluded there is no healthy level of drinking. About a third of people from east Asia have genetic variants that affect the way alcohol is broken down in the body, which can make drinking an unpleasant experience and lead to flushed skin. 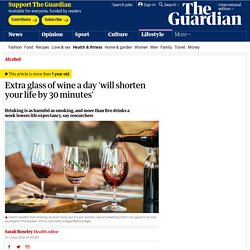 The risks for a 40-year-old of drinking over the recommended daily limit were comparable to smoking, said one leading scientist. “Above two units a day, the death rates steadily climb,” said David Spiegelhalter, Winton professor for the public understanding of risk at the University of Cambridge. Is Red Wine Really Good for Your Health? - Spectrum Website - Spectrum Conversation. Discover All the Different Types of Red Wine. First things first, red wine is well…red, but why? 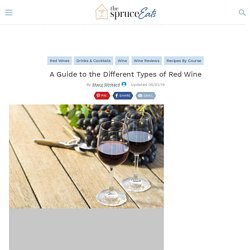 Its color can be derived from a vast assortment of grape varietals ranging from grapes that are reddish, deep purple, and even a beautiful blue on the color scale. Bénédictine D.O.M. Liqueur: The Secret to Great Drinks. All Cognac Brands. Red Wine and White Wine, between $10 and $40, rated 3.5 or more. How to make the perfect martini. Perhaps the simplest of all cocktails, what the martini lacks in ingredients it more than makes up for in mystique – and as cocktail historian David Wondrich observes, where simplicity and mystique collide, almost inevitably “you get religion”. 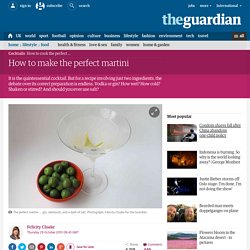 Though zealotry might be a better word: rarely has so much high-falutin’ rubbish been talked about a glass of cold booze. Basic Guide to White Wine. 18 Different Types of Red Wine.