How ‘Deprogramming’ Kids From How to ‘Do School’ Could Improve Learning. iStock One day, Adam Holman decided he was fed up with trying to cram knowledge into the brains of the high school students he taught. 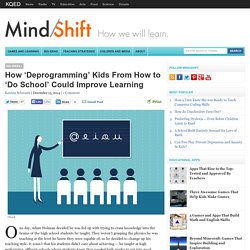 They weren’t grasping the physics he was teaching at the level he knew they were capable of, so he decided to change up his teaching style. It wasn’t that his students didn’t care about achieving — he taught at high performing, affluent schools where students knew they needed high grades to get into good colleges. The Hexagon of Proof. Following up on the work of Serra and De Villiers, and in the spirit of recent discussions about the success Bloom's Taxonomy has had in penetrating classrooms, I present the Hexagon of Proof. 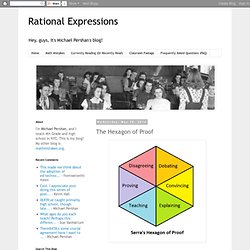 There are six components to the Hexagon of Proof. Learning is a messy affair that doesn't follow any sort of strict hierarchy, so a math classroom should involve all six of these aspects of proof. Still, if teachers find that their students are having trouble proving things in some area in math, students may benefit from time spent disagreeing over or debating some related mathematical propositions. The idea is that the reasons that are needed for proof can be developed through a variety of contexts that kids are more familiar with, such as arguing with each other over something controversial. Once a reason have been exposed, though, the reason can have a life of its own in a proof.

The Puzzle Solutions You’ve Been Waiting For…. This post will present solutions to two puzzles I have presented here on the blog, and some ideas for extending the learning with your students. 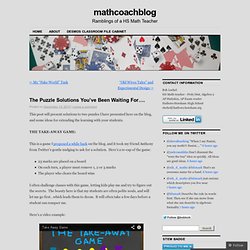 This is a game I proposed a while back on the blog, and it took my friend Anthony from Twitter’s gentle nudging to ask for a solution. Here’s a re-cap of the game: 23 marks are placed on a boardOn each turn, a player must remove 1, 2 or 3 marksThe player who clears the board wins I often challenge classes with this game, letting kids play me and try to figure out the secrets. The beauty here is that my students are often polite souls, and will let me go first…which leads them to doom. Here’s a video example: And here is the message I sent back to Anthony, who requested the secrets to the game. My “Fake World” Task. Dan Meyer’s recent post on “fake world” math tasks has me thinking about many of the openers and games I have used in my classroom. 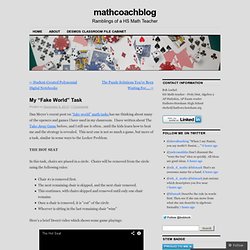 I have written about The Take-Away Game before, and I still use it often…until the kids learn how to beat me and the strategy is revealed. This next one is not so much a game, but more of a task, similar in some ways to the Locker Problem. In this task, chairs are placed in a circle. Chairs will be removed from the circle using the following rules: Chair #1 is removed first.The next remaining chair is skipped, and the next chair removed.This continues, with chairs skipped and removed until only one chair remains.Once a chair is removed, it is “out” of the circleWhoever is sitting in the last remaining chair “wins” The Take-Away Game.

A recent visit to a 6th-grade classroom gave me a chance to introduce a simple game I have used in the past as an-going challenge. 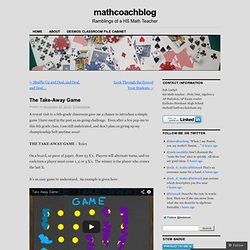 Even after a few pop-ins to this 6th grade class, I am still undefeated, and don’t plan on giving up my championship belt anytime soon! THE TAKE-AWAY GAME – Rules On a board, or piece of paper, draw 23 X’s. Players will alternate turns, and on each turn a player must erase 1, 2 or 3 X’s. The winner is the player who erases the last X. It’s an easy game to understand. My Love Letter To Orpda. This is my love letter to Orpda, an invented number language in Base 5 that I learned about through Christopher Danielson. 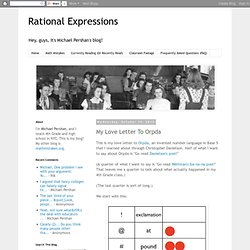 Half of what I want to say about Orpda is "Go read Danielson's post! "

What It Feels Like to Be Bad at Math. As a math teacher, it’s easy to get frustrated with struggling students. 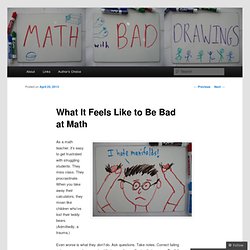 They miss class. They procrastinate. When you take away their calculators, they moan like children who’ve lost their teddy bears. (Admittedly, a trauma.) Even worse is what they don’t do. There are plenty of ways to diagnose such behavior. Math makes people feel stupid. Www.maths.ed.ac.uk/~aar/atiyahpg.pdf.

Interesting Mathematics. MKT. My Problem Based Curriculum Maps. The following Problem Based Learning (PrBL) curriculum maps are based on the Math Common Core State Standards and the associated scope and sequences. 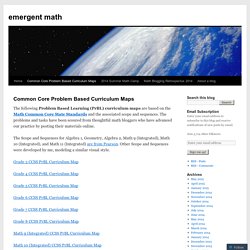