Story Elements – Video Journalism. At the most basic level, a news story should try to provide answers to the five Ws and H: Who, What, When, Where, Why and How. 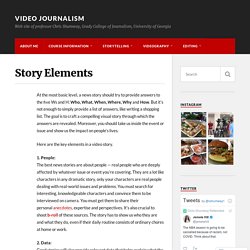 But it’s not enough to simply provide a list of answers, like writing a shopping list. The goal is to craft a compelling visual story through which the answers are revealed. Moreover, you should take us inside the event or issue and show us the impact on people’s lives. Here are the key elements in a video story. 1. 2. Scientific data – studies produced by researchers using statistical or scientific methods. Note: Each story presents its own data challenges. 3. 4.

Examples Here’s a short news PKG produced by some of my students a few years ago. Here’s a story from 2009 about the economic recession. Finally, here’s an award-winning story from WNBC-TV in New York City (NPPA 2011 Best of Photojournalism – General News category). Like this: Like Loading... Best of Data Journalism for Video Storytelling. The best-known examples of data journalism tend to be based around text and visual, but it’s harder to find data journalism in video and audio. 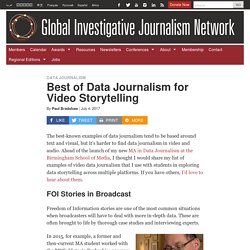 Ahead of the launch of my new MA in Data Journalism at the Birmingham School of Media, I thought I would share my list of examples of video data journalism that I use with students in exploring data storytelling across multiple platforms. If you have others, I’d love to hear about them. FOI Stories in Broadcast Freedom of Information stories are one of the most common situations when broadcasters will have to deal with more in-depth data. These are often brought to life by thorough case studies and interviewing experts. In 2015, for example, a former and then-current MA student worked with the BBC’s Victoria Derbyshire program on FOI responses from 42 police forces relating to violence in schools. 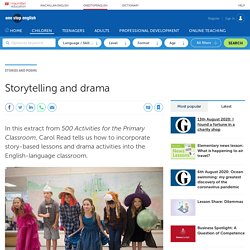 Both build on children’s innate capacity for fantasy and imaginative play, and even very young children can differentiate between the conventions of a story or drama and real life. Through stories and drama, children develop understanding of themselves and the world around them. The distance afforded by characters and events which are not real also helps children to explore significant issues which are relevant to their daily lives, in a way that is safe and enjoyable.

In storytelling and drama, the usual norms of time, place and identity are temporarily suspended as, for example, in a story which spans a hundred years yet takes three minutes to tell, or a drama activity which transforms the classroom into a ‘jungle’ and all the children in it to ‘hungry lions’. Learning through stories There are various possible approaches to using stories in class. Choosing stories Telling stories. Journalism Facts for Kids. Journalists at a press conference Journalism refers to the production and distribution of reports on recent events. 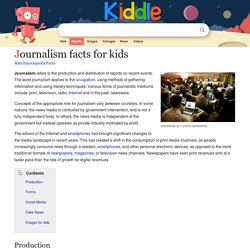 The word journalism applies to the occupation, using methods of gathering information and using literary techniques. Various forms of journalistic mediums include: print, television, radio, Internet and in the past: newsreels. Concepts of the appropriate role for journalism vary between countries. In some nations, the news media is controlled by government intervention, and is not a fully independent body. The advent of the Internet and smartphones has brought significant changes to the media landscape in recent years. Production. School magazine. Collocations. 365 Creative Writing Prompts - ThinkWritten. As an Amazon Associate I earn from qualifying purchases. 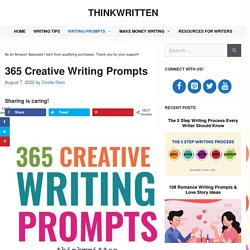 Thank you for your support! Sharing is caring! If you want to become a better writer, the best thing you can do is practice writing every single day. Writing prompts are useful because we know sometimes it can be hard to think of what to write about! To help you brainstorm, we put together this list of 365 creative writing prompts to give you something to write about daily. Whether you write short stories, poems, or like to keep a journal – these will stretch your imagination and give you some ideas for topics to write about! New for 2019! Don’t want the printable version? Here are 365 Creative Writing Prompts to Inspire: 1. 2. 300 Creative Writing Prompts for Kids.