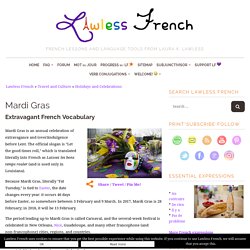 The official slogan is "Let the good times roll," which is translated literally into French as Laissez les bons temps rouler (and is used only in Louisiana). Because Mardi Gras, literally "Fat Tuesday," is tied to Easter, the date changes every year: it occurs 46 days before Easter, so somewhere between 3 February and 9 March. In 2017, Mardi Gras is 28 February; in 2018, it will be 13 February. The period leading up to Mardi Gras is called Carnaval, and the several-week festival is celebrated in New Orleans, Nice, Guadeloupe, and many other francophone (and non-francophone) cities, regions, and countries. Mardi Gras colors ~ Les couleurs de Mardi gras The three official colors of Mardi Gras have official meanings: 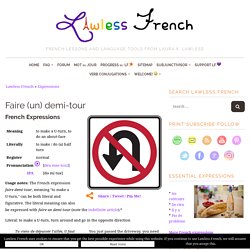 The literal meaning can also be expressed with faire un demi-tour (note the indefinite article).* Literal: to make a U-turn, turn around and go in the opposite direction Synonyms. French Apocopes - Shortened French Words - French Abbreviations. French Vacation Vocabulary & Expressions - Les Vacances - Learn French. "Les vacances" (always plural in French) - vacation, is at the heart of the French culture. 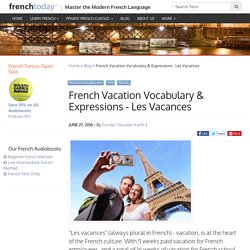 With 5 weeks paid vacation for French employees, and a total of 16 weeks of vacation for French school students, France sure values her holidays. In this lesson, we will study the French vacation vocabulary, learn expressions used for holidays, as well as cultural information and tips. Paid Vacation in France The French are known to take a lot of vacations, especially if you compare them to the Americans! But is this “five weeks of paid vacation” myth really true? Frenchtoday. More and more people enjoy taking a cruise (une croisière) in Europe. 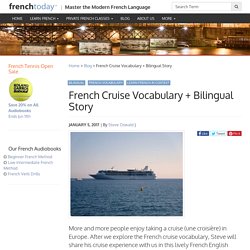 After we explore the French cruise vocabulary, Steve will share his cruise experience with us in this lively French English bilingual story, and then he'll list the pros and cons of traveling on a cruise. French Cruise Vocabulary Our French Cruise Récemment, un article de journal a retenu mon attention. Laura K. Lawless on Patreon. Part of speech: noun Sound file: gratin Translation: baked dish with something grated on top, such as cheese or breadcrumbs* Il va faire une sole au gratin. - He's going to make breaded sole. 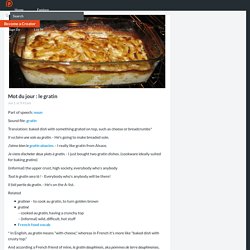 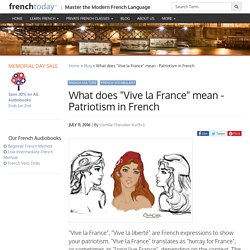 It’s one of the typical French mottos, such as “God Bless America” or “God Save the Queen”. Family Matters: French Words to Talk about Your Loved Ones. Frenchtoday. "Il y a" is probably the common French word where the modern French pronunciation is the most blatant. 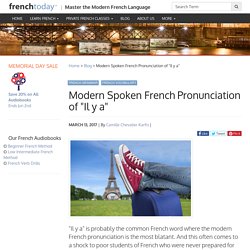 And this often comes to a shock to poor students of French who were never prepared for that! First of all, “il y a” (meaning there is, there are, or ago) naturally glides. Souffler ses bougies - Informal French Expression - Lawless French. Usage notes: The French expression souffler ses bougies can literally mean "to blow out one’s candles" on a birthday cake. 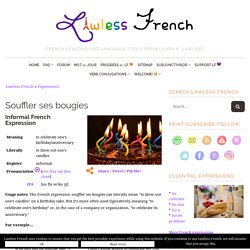 But it’s more often used figuratively, meaning "to celebrate one’s birthday" or, in the case of a company or organization, "to celebrate its anniversary. " Par exemple… Grammar notes / Variations The possessive adjective changes to match the subject – whoever’s birthday or anniversary it is. The possessive adjective and the number both change to make two slightly different but perfectly synonymous expressions. 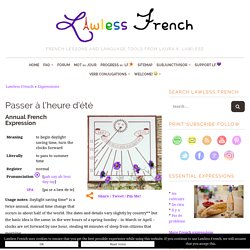 The dates and details vary slightly by country** but the basic idea is the same: in the wee hours of a spring Sunday – in March or April – clocks are set forward by one hour, stealing 60 minutes of sleep from citizens that morning. Par exemple… The corresponding fall time change is much more welcome, as it restores that stolen hour of sleep. Le passage à l’heure d’été marks the beginning of daylight saving time, which has three possible names in French: * Yes, "saving. " ** In Metropolitan France, daylight saving time begins at 2 am on the last Sunday in March and ends at 3 am on the last Sunday in October – find out the dates. 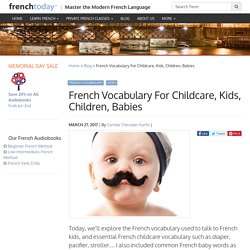 Gmail - Free Storage and Email from Google. AT&T - Login. What does "Keep me signed in" mean? Many of our users have asked for a way to reduce how frequently they're asked to sign-in to att.net and Mail. By checking this new box you'll stay signed in for up to 2 weeks or until you sign out. You'll get easier access to your mail, photos, music, and all your other stuff, even if you close your browser or shut down your computer. To protect your most sensitive data and activities (like changing your password or using your credit card), we'll ask you to re-enter your password when you access some AT&T services. Frenchtoday. French Movie Terms - Lawless French Vocabulary for Cinephiles. Lights! Camera! Action (verbs)! Learn French vocabulary related to movies, cinemas, and the Cannes film festival. Gmail - Free Storage and Email from Google. 15 Misused French Terms in the English Language - Part 1.

By checking this new box you'll stay signed in for up to 2 weeks or until you sign out. You'll get easier access to your mail, photos, music, and all your other stuff, even if you close your browser or shut down your computer. To protect your most sensitive data and activities (like changing your password or using your credit card), we'll ask you to re-enter your password when you access some AT&T services. What if I'm on a computer that I share with others? If you're using a public computer or you share this computer with others, we recommend that you uncheck the "Keep me signed in" box.

This checkbox applies to this computer only. You can change the length of time you remain signed in to att.net and Mail, once you are signed in, by clicking on the "My Account" link at the top of most of the att.net pages. Le vocabulaire en anglais pour travailler dans la restauration. Lorsqu’on est au bout du monde, pas toujours facile de savoir bien s’exprimer en Anglais. L'argent de poche : quand commencer? Learning French from the News. Learning French from the News. French Phone Vocabulary and Dialogue - Learn French In Context - Learn French. Having a conversation in French is stressful enough. Yet, speaking French on the phone adds a whole dimension to it. Part of the problem is the specific French phone vocabulary such as "je vous le passe" or "ne quittez pas".

Endearing modifiers Make the term of endearment cuter by adding petit (little) in front: mon petit chou, ma petite minette, etc.Sweeten the pot by adding en sucre (made of sugar) to the end: mon cœur en sucre, mon trésor en sucre, etc. Note that the possessive adjectives mon and ma (my) always agree with the gender of the term of endearment, which may not match your gender or the gender of your beloved. When there is a masculine form and a feminine form, use the term that corresponds to the gender of your beloved. When there’s only one gender, the general rule is that masculine terms of endearment can be used for anyone, but feminine terms of endearment can only be used for girls. Gmail - Free Storage and Email from Google.