Boko Haram: 214 ‘Rescued’ Girls, Women Pregnant; Some Of The Children Were Born In The Forest - UNFPA. “Already, as at yesterday (Saturday), many of them are undergoing screening for various diseases, infections including HIV/AIDS and about 214 of those already screened were discovered to be at various stages of pregnancies, some visibly pregnant and some just tested pregnant; but we are supporting all of them with various levels of care to stabilize them”. 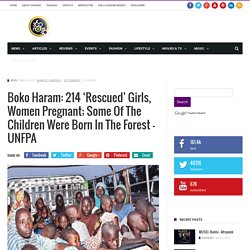 Freed Nigerian women tell of how Boko Haram killed men and boys. Boko Haram fighters killed older boys and men in front of their families before taking women and children into the forest where many died of hunger and disease, freed captives have revealed. 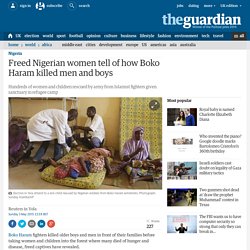 Hundreds of women and children were rescued by the Nigerian army last week from Islamist fighters in northern Nigeria’s Sambisa Forest in a major operation. After days on the road in pickup trucks, hundreds were released on Sunday into the care of authorities at a refugee camp in the eastern town of Yola, to be fed and treated for injuries. Some told reporters about their ordeal. “They didn’t allow us to move an inch,” said Asabe Umaru.

“If you needed the toilet, they followed you. “We thank God to be alive today. Nigeria: More women and children freed from Boko Haram. Nigeria's military says it has rescued at least 160 more women and children who had been abducted by Boko Haram and were being held in the Sambisa Forest, considered to be the armed group's last stronghold. 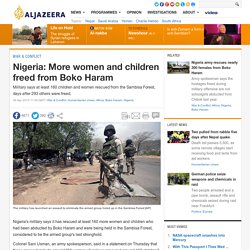 Colonel Sani Usman, an army spokesperson, said in a statement on Thursday that those rescued include around "60 women of various ages and around 100 children". "They have been evacuated to a safety zone for further processing," Usman said. At least one woman and one soldier were reportedly killed in the fighting during the rescue. Eight other women and four soldiers were also injured. Al Jazeera's Yvonne Ndege, reporting from Abuja, said that the reports from the army could not be independently verified because of restricted access to the area. However, she added that the military promised to release more evidence of the rescues, including photographs, later on Thursday. Boko Haram has abducted an unknown number of girls, women and young men to be used as sex slaves and fighters.

Democracy ‘Kicked Off’ in Nigeria as Buhari Seals Historic Election Win. World A man reads a newspaper with a headline related to the country's elections, at a news stand at Port Harcourt, in the Rivers state March 31, 2015. 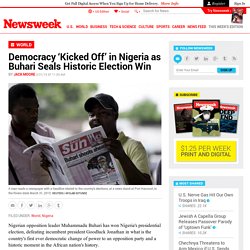 Reuters / Afolabi Sotunde Nigerian opposition leader Muhammadu Buhari has won Nigeria's presidential election, defeating incumbent president Goodluck Jonathan in what is the country's first ever democratic change of power to an opposition party and a historic moment in the African nation's history. Results tallied by Reuters showed that All Progressives Congress (APC) leader Buhari, 72, had 15.4 million votes to People’s Democratic Party (PDP) leader Jonathan’s 13.3 million in all of the country's 36 states. “We have everything. Try Newsweek for only $1.25 per week. Army Surrounds 6000 Boko Haram Insurgents In Borno. Latest reports coming out of Borno State, northern Nigeria inform that the Nigerian military on Tuesday night surrounded no fewer than 6000 members of the Islamist militants group, Boko Haram, in Madagali and Gulak area of the state. 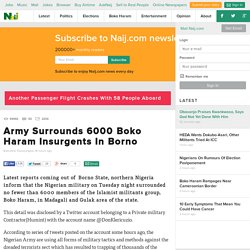 This detail was disclosed by a Twitter account belonging to a Private military Contractor(Humint) with the account name @DonKlericuzio. According to series of tweets posted on the account some hours ago, the Nigerian Army are using all forms of military tactics and methods against the dreaded terrorists sect which has resulted to trapping of thousands of the insurgents. 200 Boko Haram Fighters, 9 Chadian Soldiers Killed In Clashes.

Chadian forces have recorded a significant victory over Boko Haram by evicting the sect out of the border town of Gamboru yesterday, January 3, within hours of launching a ground offensive against the jihadist group. 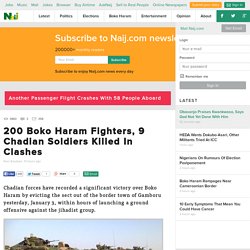 Three armoured vehicles of the Chadian army are pointed in the direction of Gamboru, Nigeria, from a position in Fotokol, Cameroon, on February 1, 2015 / Photo : AFP “We have routed this group of terrorists,” the commander of the Chadian contingent Ahmat Dari told AFP, vowing to continue the fight against the insurgents “until the end”. READ ALSO: Army Surrounds 6000 Boko Haram Insurgents In Borno The army confirmed the death of more than 200 Boko Haram Fighters in the clash, while eight Chadian soldiers were killed and around 20 injured. The ground intervention by Chad came after the African Union last week backed a regional five-nation, 7,500-strong force to take on the extremists amid growing fears about their threat to regional security. 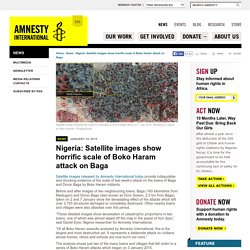 Before and after images of two neighbouring towns, Baga (160 kilometres from Maiduguri) and Doron Baga (also known as Doro Gowon, 2.5 km from Baga), taken on 2 and 7 January show the devastating effect of the attacks which left over 3,700 structures damaged or completely destroyed. Other nearby towns and villages were also attacked over this period.