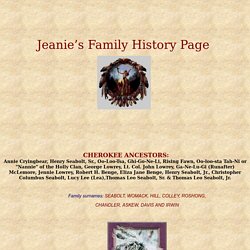 Indians 101: Dragging Canoe, Cherokee Leader. Dragging Canoe first appears in the written European histories in 1775 when the Transylvania Company met with the Cherokees in a treaty council at Sycamore Shoals on the Watauga River. 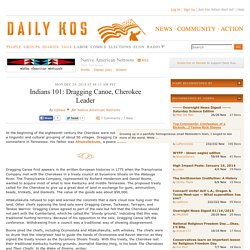 The Transylvania Company, represented by Richard Henderson and Daniel Boone, wanted to acquire most of what is now Kentucky and middle Tennessee. The proposed treaty called for the Cherokee to give up a great deal of land in exchange for guns, ammunition, beads, trinkets, and blankets. The value of the goods was about $50,000. Attakullakulla refused to sign and warned the colonists that a dark cloud now hung over the land. Seabolt Cemetery. Betsy " Runafter" "Ga-ne-lu-gi" McLemore. History of the Cherokee Indians and their legends and folk lore : Starr, Emmet. Scottish Tartans Authority. Born around 1760 in the Cherokee village of Togue, possibly on the Little Ta ni si river, Bob Benge - also called Captain Benge and The Bench - was the son of a Scottish trader John Benge and a full blood Cherokee named Wurtah. 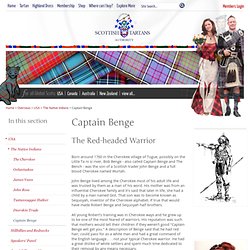 John Benge lived among the Cherokee most of his adult life and was trusted by them as a man of his word. His mother was from an influential Cherokee family and it's said that later in life, she had a child by a man named Gist. That son was to become known as Sequoyah, inventor of the Cherokee alphabet. If true that would have made Robert Benge and Sequoyah half brothers. All young Robert's training was in Cherokee ways and he grew up to be one of the most feared of warriors.

The Benge Route. Benge Route is named for the conductor of the detachment, John Benge. 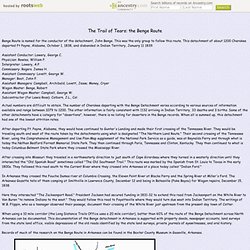 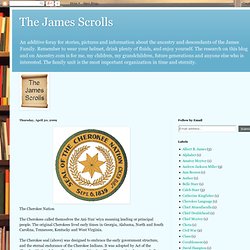 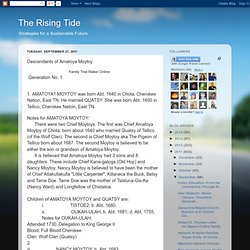 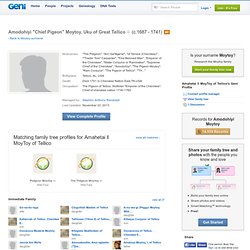 Was a Cherokee leader from Great Tellico, recognized by British colonial authorities as the "Emperor of the Cherokee"; the Cherokee themselves used the title "First Beloved Man". His name is derived from Amo-adawehi, "rainmaker," although it is unclear whether this was his personal name or a title he held. In 1730 Sir Alexander Cuming, a Scottish adventurer with no particular authority, arranged for Moytoy to be crowned emperor over all of the Cherokee towns.

He was crowned in Nikwasi with a headdress Cuming called the "Crown of Tannassy. " Cuming arranged to take Moytoy and a group of Cherokee to England to meet King George. Tennessee Encyclopedia. Attakullakulla (right) on 1730 trip to England. 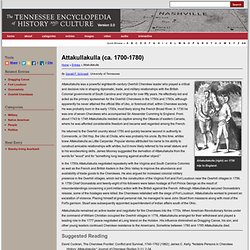 Attakullakulla was a powerful eighteenth-century Overhill Cherokee leader who played a critical and decisive role in shaping diplomatic, trade, and military relationships with the British Colonial governments of South Carolina and Virginia for over fifty years. He effectively led and acted as the primary spokesman for the Overhill Cherokees in the 1750s and 1760s, although apparently he never attained the official title of Uko, or foremost chief, within Cherokee society. He was probably born in the early 1700s, most likely along the French Broad River. In 1730 he was one of seven Cherokees who accompanied Sir Alexander Cumming to England. From about 1743 to 1748 Attakullakulla resided as captive among the Ottawas of eastern Canada, where he was afforded considerable freedom and became well regarded among the French. Attakullakulla remained an active leader and negotiator for the Cherokees into the 1770s.

Chronicles of Oklahoma. By Gaston L. 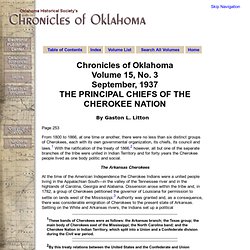 Litton Page 253. Attakullakulla. Attakullakulla (Cherokee, Ata-gul' kalu; often called Little Carpenter by the English) (circa 1708–1778) was an influential Cherokee leader and the tribe's First Beloved Man, serving from 1761 to around 1775. 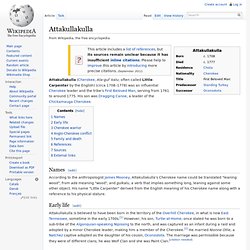 His son was Dragging Canoe, a leader of the Chickamauga Cherokee. Names[edit] According to the anthropologist James Mooney, Attakullakulla's Cherokee name could be translated "leaning wood", from ada meaning "wood", and gulkalu, a verb that implies something long, leaning against some other object. His name "Little Carpenter" derived from the English meaning of his Cherokee name along with a reference to his physical stature.

Edward S. Curtis's The North American Indian - portfolio 6 plate no. 203 Weasel Tail – Piegan. Sharing.ancestry.com/3392934.pdf?h=2612c6. The Two Families of John “Old Trader” Benge. BENGE, John Born: about 1735 in Virginia. Other records suggest he may have been born as early as 1726. Known as “Old Trader, and operated a trading post on the Cumberland. Robert "Bob" Benge. Copyrighted by Don Chesnut, 1997. NA-CHEROKEE-NC-L WURTAH.