Programmer's trouble. Free Web Development Courses. HTML and Javascript Cheat Sheet for Site Designers. 53Shares1918132100×53Shares In the past, if you wanted to create a website of your own, you would need to know how to code, design within Adobe Photoshop, upload files through FTP software and then also make sure your site was properly setup to view accordingly in each web browser. 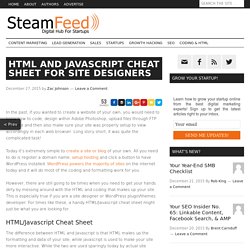 Long story short, it was quite the complicated task! Today it’s extremely simple to create a site or blog of your own. All you need to do is register a domain name, setup hosting and click a button to have WordPress installed. WordPress powers the majority of sites on the internet today and it will do most of the coding and formatting work for you. Welcome to web.py! (web.py) Misused mobile UX patterns. Misused mobile UX patterns If you are an experienced designer, you probably agree that being inspired by others is not stealing in UI design. 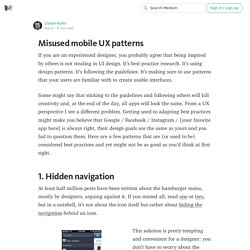 How Minimalist Design Almost Killed Skeuomorphism. Learn Web Development for Free Using Ruby on Rails. How we ended up with microservices. Microservices are a thing these days. 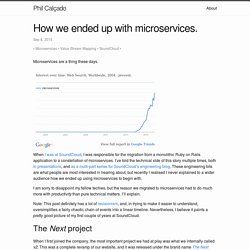 When I was at SoundCloud, I was responsible for the migration from a monolithic Ruby on Rails application to a constellation of microservices. I’ve told the technical side of this story multiple times, both in presentations, and as a multi-part series for SoundCloud’s engineering blog. 7 Methods for Improving UX with Motion Design. Animation in apps has taken on a new and improved meaning. 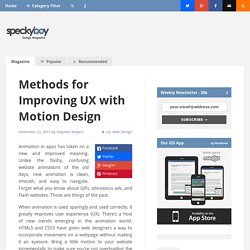 Unlike the flashy, confusing website animations of the old days, new animation is clean, smooth, and easy to navigate. » Seriously, Don’t Use Icon Fonts Cloud Four Blog. Icons are everywhere.

These “little miracle workers” (as John Hicks described them) help us reinforce meaning in the interfaces we design and build. Their popularity in web design has never been greater; the conciseness and versatility of pictograms in particular make them a lovely fit for displays large and small. But icons on the web have had their fair share of challenges. They were time-consuming to prepare for every intended display size and color. When high-resolution displays hit the market, icons looked particularly low-res and blocky compared to the text they often accompanied. Is the Web better without JavaScript?

Is the Web better without JavaScript? 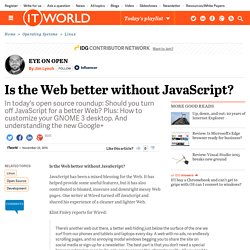 JavaScript has been a mixed blessing for the Web. It has helped provide some useful features, but it has also contributed to bloated, insecure and downright messy Web pages. Sublime Text: The text editor you'll fall in love with. How we ended up with microservices. Enhancing Responsiveness with Flexbox (CSS Conf EU 2015) The 9 Web Development Resources I Can't Work Without in 2015. Details If you need to measure the speed of a website GTMetrix will be a great friend. 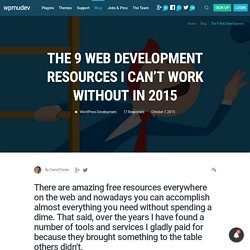 Just like the popular Pingdom it offers free website speed test and analysis, but for more robust testing you’ll want a pro account. A website’s speed can vary over time which means that ideally we should run multiple tests using multiple variants over the course of a larger time span. 16 Best YouTube Channels To Start Learning Web Development. Want to be a web developer but not sure where to start or which programming language to begin with? 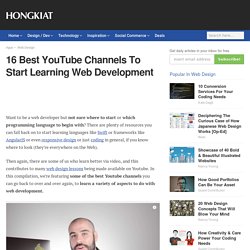 There are plenty of resources you can fall back on to start learning languages like Swift or frameworks like AngularJS or even responsive design or just coding in general, if you know where to look (they’re everywhere on the Web). Then again, there are some of us who learn better via video, and this contributes to many web design lessons being made available on Youtube. In this compilation, we’re featuring some of the best Youtube channels you can go back to over and over again, to learn a variety of aspects to do with web development. Graphic Design Trends Fading in 2015. To say that graphics are the fabrication of visual statement won’t be wrong at all. 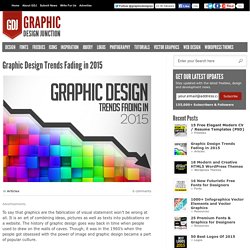 It is an art of combining ideas, pictures as well as texts into publications or a website. The history of graphic design goes way back in time when people used to draw on the walls of caves. Though, it was in the 1960’s when the people got obsessed with the power of image and graphic design became a part of popular culture. Graphic Designs and the Visual culture Graphic designs gradually became a much more significant feature which was and is still used widely all across the world. In the 20th century, however, the designs were used to persuade and attract customers which became the reason in the change of cultural attitudes and behavior.

The Future Of Coding Is Here, And It Threatens To Wipe Out Everything In Its Path. Chet Kapoor is the chief executive of Apigee and previously served as vice president of content management and search products at IBM and VP/general manager for the integration group of BEA Systems. 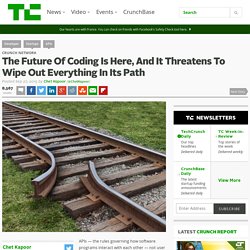 How to join the network APIs — the rules governing how software programs interact with each other — not user interfaces, will upend software for years to come. When Intel CEO Brian Krzanich doubled down on the Internet of Things at the company’s annual Developer Forum in August, he emphasized what many of us have already known — the dawn of a new era in software engineering. Introducing the U.S. Web Design Standards. Tagged / proactive federal partner / our projects / design / usds / open source /

Design tools and creative experiments. The HTML 5 Mega Cheat Sheet - Make A Website Hub. Posted at 13:04h in Web Cheat Sheets by Jamie Cheat sheets; don’t you just love them? I love them as they offer me a simple way to recall a software program or help me to learn a new skill. Cheat Sheets for Frontend Developers. Luis | October 6, 2015 | Resources Cheat sheets are amazingly handy quick reference resources that are time saving and educational, so we should probably all use them at one time or another.

For frontend development, cheat sheets are especially helpful as most of us cannot commit every snippet, tag, etc, to memory. Just like language, there are times our brains go blank and a word we are trying to bring to memory just won’t come – it doesn’t mean we don’t know it, just that we can’t think of it right now. Of course, cheat sheets for words failing us don’t exist unless they are called dictionaries! So even if you think you know your subject inside out, a few handy cheat sheets can still prove invaluable. HTML and CSS Cheat Sheets HTML5 Mega Cheat Sheet A list of all the new HTML5 tags, event attributes, mobile, browsers and canvas. Ludicrously Fast Page Loads - A Guide for Full-Stack Devs. Summary: Your website is slow, but the backend is fast. How do you diagnose performance issues on the frontend of your site? We'll discuss everything involved in constructing a webpage and how to profile it at sub-millisecond resolution with Chrome Timeline, Google's flamegraph-for-the-browser. (4428 words/22 minutes) Server response times, while easy to track and instrument, are ultimately a meaningless performance metric from an end-user perspective.

Actual end-user response to the word 'microservices'. End-users don't care how fast your super-turbocharged bare-metal Node.js server is - they care about the page being completely loaded as fast as possible. Well, what does constructing a webpage actually require? Server response times can easily balloon without proper use of caching, both at the application and HTTP layers. So what's a good, performance-minded full stack developer to do? Enter Chrome Timeline My number one front-end performance tool is Chrome Timeline. Receiving the HTML. The 9 Web Development Resources I Can't Work Without in 2015. TextRazor - The Natural Language Processing API. TextRazor's relation extraction module leverages our state-of-the-art Dependency Parser and a set of sophisticated linguistic rules to parse relationships in any kind of text.

Our approach offers a significant increase in accuracy and recall over alternative solutions, providing you the flexibility to mine an unlimited number of relationship types. TextRazor's relation extraction system has been used to extract targets of opinions, find management appointments in news stories, extract clinical trial results from medical documents, and parse legal documents. Dependency Parsing Typically deep syntactic parsing of language is prohibitively slow and brittle across domains. TextRazor's parser was developed from scratch to tackle these issues head on. We achieve this with a combination of several systems built on the latest academic research into syntactic dependency parsing, trained on our custom corpus of newswire and conversational English text.