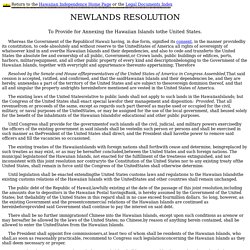 Whereas the Government of the Republicof Hawaii having, in due form, signified its consent, in the manner providedby its constitution, to cede absolutely and without reserve to the UnitedStates of America all rights of sovereignty of whatsoever kind in and overthe Hawaiian Islands and their dependencies, and also to cede and transferto the United States the absolute fee and ownership of all public, Government,or Crown lands, public buildings or edifices, ports, harbors, militaryequipment, and all other public property of every kind and descriptionbelonging to the Government of the Hawaiian Islands, together with everyright and appurtenance thereunto appertaining; Therefore SEC. 2. That the commissioners hereinbeforeprovided for shall be appointed by the President, by and with the adviceand consent of the Senate.

SEC. 3. SEREXOE. GARRETTA. Newlands Resolution. On August 12, 1898, the flag of the Republic of Hawaii over ‘Iolani Palace was lowered to raise the United States flag to signify annexation. 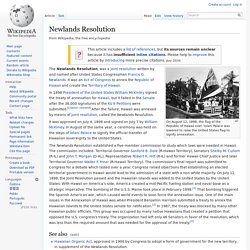 The Newlands Resolution, was a joint resolution written by and named after United States Congressman Francis G. Newlands. Queen Lili‘uokalani - Queen Liliuokalani Trust. The Queen Lili‘uokalani Trust was born out of the aloha and care that a loving Queen had for the children and families of Hawai‘i. “...He will keep His promise, and will listen to the voices of His Hawaiian children lamenting for their homes. 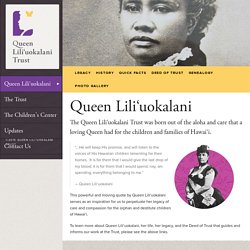 It is for them that I would give the last drop of my blood; it is for them that I would spend, nay, am spending, everything belonging to me.” — Queen Lili‘uokalani This powerful and moving quote by Queen Lili‘uokalani serves as an inspiration for us to perpetuate her legacy of care and compassion for the orphan and destitute children of Hawai‘i. Newlands Resolution Annexing the Hawaiian Islands to the United States. Anti-annexation petitions - Page 1. [ Petition Table of Contents ] The 1897 Petitions Protesting Annexation Noenoe K. 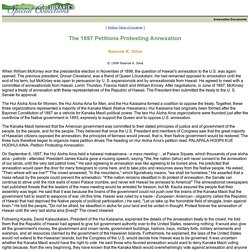 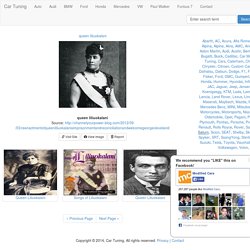 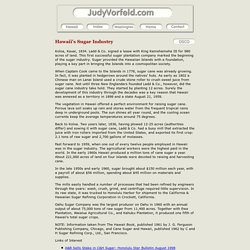 Ladd & Co. signed a lease with King Kamehameha III for 980 acres of land. This first successful sugar plantation company marked the beginning of the sugar industry. Sugar provided the Hawaiian Islands with a foundation, playing a key part in bringing the Islands into a cosmopolitan society. When Captain Cook came to the Islands in 1778, sugar cane was already growing. In fact, it was planted in hedgerows around the natives' huts. The vegetation in Hawaii offered a perfect environment for raising sugar cane. 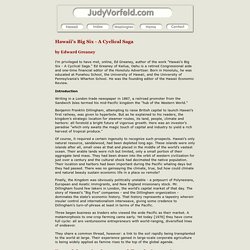 " Ed Greaney of Kailua, Oahu is a retired Congressional aide and one-time financial editor of the Honolulu Advertiser. History of Hawaii/Missionaries Sugar Immigration. Sugarcane has historically been an important source of income for Hawaii. 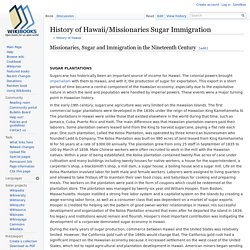 The colonial powers brought imperialism with them to Hawaii, and with it, the production of sugar for exportation. This export in a short period of time became a central component of the Hawaiian economy, especially due to the exploitative nature in which the land and population were handled by imperial powers. These events were a major turning point in Hawaiian history. Nutfield Genealogy: Queen Liliuokalani in the Headlines, 1894. Another genealogy blogger, Kim Von Aspern, author of the blog “Le Maison Duchamp” at wrote to me that she had seen an unusual news headline about “Queen Lila Kalei” in a South Carolina newspaper in 1894. 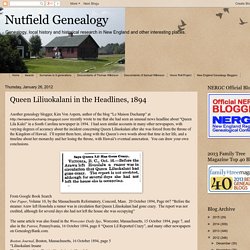 I had seen similar accounts in many other newspapers, with varying degrees of accuracy about the incident concerning Queen Liliuokalani after she was forced from the throne of the Kingdom of Hawaii. I’ll reprint them here, along with the Queen’s own words about that time in her life, and a timeline about her monarchy and her losing the throne, with Hawaii’s eventual annexation. You can draw your own conclusions. From Google Book Search.

Hawaii Plans Quiet 50th Anniversary of Statehood; Some Want Independence for Island Chain. Honolulu (AP) - Hawaii turns 50 years old as the 50th state Friday, but there will be no grand parades, no dazzling fireworks, no lavish displays of native culture. 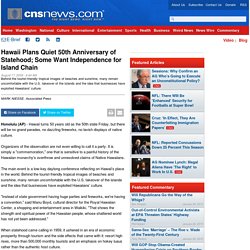 Organizers of the observation are not even willing to call it a party. It is simply a "commemoration," one that is sensitive to a painful history of the Hawaiian monarchy's overthrow and unresolved claims of Native Hawaiians. The main event is a low-key daylong conference reflecting on Hawaii's place in the world. Behind the tourist-friendly tropical images of beaches and sunshine, many remain uncomfortable with the U.S. takeover of the islands and the idea that businesses have exploited Hawaiians' culture.

"Instead of state government having huge parties and fireworks, we're having a convention," said Manu Boyd, cultural director for the Royal Hawaiian Center, a shopping and entertainment area in Waikiki. Native Hawaiians to Federal Government: Give Us Back Our Kingdom. The federal government posed a series of questions to Native Hawaiians, with whom it's seeking to reestablish nation-to-nation status. The answer it received, to all, was a resounding "no. " This week, the Department of the Interior wrapped up two weeks of public meetings in Hawaii soliciting input from the Native Hawaiian community on setting up a similar structure to the one it has with Native American tribes.

Kale Gumapac was one of the 130 people who signed up to speak in Hilo on the island of Hawaii. “[On] the questions that you raised for everyone to answer. It’s a trap," said Gumapac. Frances Kai-Hwa Wang. Hawaiian Annexation. Judiciary History Center Ali'iolani Hale, completed in 1874, was the home of the Hawaiian Legislature in the days before annexation. By the time the United States got serious about looking beyond its own borders to conquer new lands, much of the world had already been claimed. Only a few distant territories in Africa and Asia and remote islands in the Pacific remained free from imperial grasp. Hawaii was one such plum. Hawaiian annexation .. : Bacon, Augustus Octavius, 1839-1914. Voices from the Canefields: Folksongs from Japanese Immigrant Workers in Hawaii Webcast. TITLE: Voices from the Canefields: Folksongs from Japanese Immigrant Workers in Hawaii SPEAKER: Franklin Odo EVENT DATE: 2013/09/20 RUNNING TIME: 57 minutes TRANSCRIPT: View Transcript (link will open in a new window) Drawing on research for his recent book, "Voices from the Canefields," author Franklin Odo situates over two hundred songs of Japanese immigrant workers in Hawaii, in translation, in a hitherto largely unexplored historical context.

According to Odo, folk songs are short stories from the souls of common people. Some,like Mexican corridos or Scottish ballads reworked in the Appalachians, are stories of tragic or heroic episodes. Others, like the African American blues, reach from a difficult present back into slavery and forward into a troubled future. Japanese workers on Hawaii's plantations created their own versions, in form more akin to their traditional tanka or haiku poetry. Speaker Biography: Franklin S. Related Webcasts SERIES: Benjamin Botkin Lecture Series. 130920afc1200. Evening bulletin. (Honolulu [Oahu, Hawaii) 1895-1912, July 20, 1898, Image 1. The Overthrow of the Monarchy.

Return to the Hawaiian Independence Home Page or the View this article text only, or just the images with captions. Liliuokalani. Liliʻuokalani (Hawaiian pronunciation: [liliˌʔuokəˈlɐni]; September 2, 1838 – November 11, 1917), born Lydia Liliʻu Loloku Walania Wewehi Kamakaʻeha, was the last monarch and only queen regnant of the Kingdom of Hawaii. She was also known as Lydia Kamakaʻeha Pākī, with the chosen royal name of Liliʻuokalani, and her married name was Lydia K. Dominis. Early life[edit] Liliʻuokalani in her youth. Liliʻuokalani was born on September 2, 1838 to the High Chiefess Analea Keohokālole and High Chief Caesar Kaluaiku Kapaʻakea.

The Premier Elizabeth Kīnaʻu had developed an eye infection at the time of Liliʻu's birth. On September 16, 1862, Liliʻuokalani married John Owen Dominis, who became Governor of Oʻahu and Maui. Crown Princess[edit] ContentDetails. <p class="wishlist-js-off" style="width:100%; text-align:center; padding:0; margin:0;" aria-live="polite" role="contentinfo">The Wish List function is disabled with javascript off. </p> Sanford B. Dole. Sanford Ballard Dole (April 23, 1844 – June 9, 1926) was a lawyer and jurist in the Hawaiian Islands as a kingdom, protectorate, republic and territory. Hawaii's Story by Hawaii's Queen. Opposition to the Overthrow of the Kingdom of Hawaii. Hui Aloha ʻĀina for women. Background[edit] Lili’uokalani: Who was the Last Queen of Hawaii? Announcer: Welcome to Stuff You Missed in History Class from www.HowStuffWorks.com. Katie Lambert: Hello, and welcome to the podcast. I'm Katie Lambert.