JR’s Bail Bonds is proud to be the top bail bond providers in Los Angeles, Riverside, San Bernardino, and Orange Counties. We understand that being arrested can be a stressful experience, which is why we offer quick bail bonds with ZERO interest so you can get back to your family faster. From Long Beach, CA to Pasadena, CA and everywhere in between, we provide convenient 24/7 access to our bail bond services. If you or a loved one require the services of a bail bondsman, please do not hesitate to give us a call. We have five convenient locations: Inglewood, Gardena, Pasadena, Santa Ana, and Long Beach, CA.

Appropriate Actions to Take When Seeking a Bail Bond After Committing a Crime. Page | 2 Before you move forward with your legal options, it’s helpful to know why you should post bail in the first place. 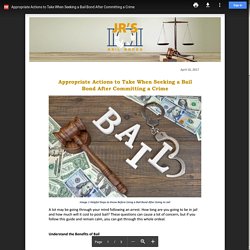 Securing bail is not only the quickest way to get out of jail, but it also gives you time to work on your defense. You may not be familiar with the charges, for example, but you. What You Need to Know About Posting Bail and Getting Help from a Bail Bondsman. When you get arrested, your entire life doesn’t have to be put on hold as you can post bail. 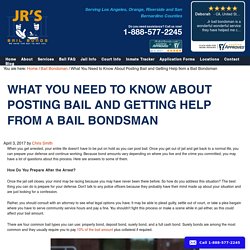 Once you get out of jail and get back to a normal life, you can prepare your defense and continue working. Because bond amounts vary depending on where you live and the crime you committed, you may have a lot of questions about this process. Here are answers to some of them. How Do You Prepare After the Arrest? Once the jail cell closes, your mind may be racing because you may have never been there before. Important Considerations that Could Affect Being Allowed To Post Bail Bonds. How is a Bail Amount Determined? Most people today are granted bail following an arrest, unless there are serious concerns about their safety or that of the community if they are set free. 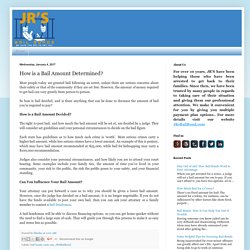 The Best Things You Can Do While Out On Bail. So you’ve managed to secure a bail bond, and are now enjoying your freedom with your family while you wait for your court hearing. 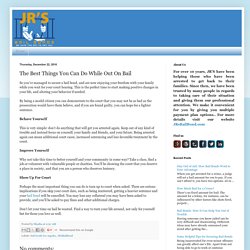 This is the perfect time to start making positive changes in your life, and altering your behavior if needed. By being a model citizen you can demonstrate to the court that you may not be as bad as the prosecution would have them believe, and if you are found guilty, you can hope for a lighter sentence. Behave Yourself This is very simple: don’t do anything that will get you arrested again. Keep out of any kind of trouble and instead focus on yourself, your family and friends, and your future.

Get to Know 3 Popular Bail Bond Types. If a person gets arrested, posting bail is one of the ways he can keep himself from getting locked up. 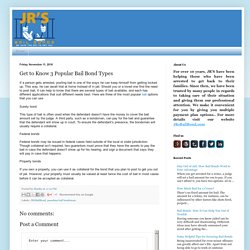 This way, he can await trial at home instead of in jail. Should you or a loved one find the need to post bail, it can help to know that there are several types of bail available, and each has different applications that suit different needs best. Here are three of the most popular bail options that you can use Surety bond This type of bail is often used when the defendant doesn’t have the money to cover the bail amount set by the judge.

Appropriate Etiquette When You Get Arrested. In a perfect world, only guilty suspects wind up in police custody. 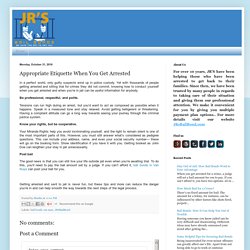 Yet with thousands of people getting arrested and sitting trial for crimes they did not commit, knowing how to conduct yourself when you get arrested and when you’re in jail can be useful information for anybody. Be professional, respectful, and polite. Tensions can run high during an arrest, but you’d want to act as composed as possible when it happens. Speak in a measured tone and stay relaxed.

Avoid getting belligerent or threatening. Know your rights, but be cooperative. Your Miranda Rights help you avoid incriminating yourself, and the right to remain silent is one of the most important parts of this. Jrs Bail Bond: Bail Bond for First Time Offenders in Los Angeles. Your Responsibilities When Bailing Out a Friend. Sometimes, seeking the services of a bail bonds company is necessary to help a friend get out of jail. 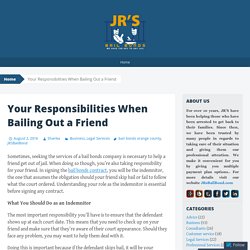 When doing so though, you’re also taking responsibility for your friend. In signing the bail bonds contract, you will be the indemnitor, the one that assumes the obligation should your friend skip bail or fail to follow what the court ordered. Understanding your role as the indemnitor is essential before signing any contract. What You Should Do as an Indemnitor The most important responsibility you’ll have is to ensure that the defendant shows up at each court date. Get to Know Some Common Types of Bail Bonds. If you or your loved one is arrested for a minor charge, your primary concern is to be released from jail as early as possible. 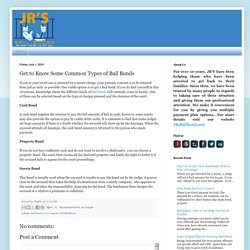 One viable option is to get a bail bond. If you do find yourself in this situations, knowledge about the different kinds of bail bonds will certainly come in handy. One of these can be selected based on the type of charges pressed and the decision of the court. How You Can Get Your Money Back After Posting Bail. One of the days you dread the most have come true: you or a loved one has been arrested. 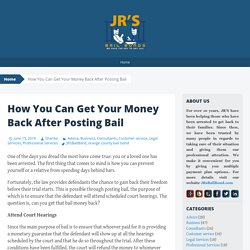 The first thing that comes to mind is how you can prevent yourself or a relative from spending days behind bars. Fortunately, the law provides defendants the chance to gain back their freedom before their trial starts. This is possible through posting bail, the purpose of which is to ensure that the defendant will attend scheduled court hearings. Quick Bail Bond Service Eases Family Stress. Anyone who has the experience of being processed in the Orange County, CA judicial system understands what a tumultuous experience it can be. 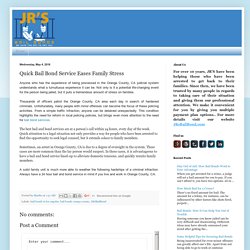 Not only is it a potential life-changing event for the person being jailed, but it puts a tremendous amount of stress on families. Thousands of officers patrol the Orange County, CA area each day in search of hardened criminals. Unfortunately, many people with minor offenses can become the focus of these policing activities. From a simple traffic infraction, anyone can be detained unexpectedly. This condition highlights the need for reform in local policing policies, but brings even more attention to the need for bail bond services.

Consequences of Bail Jumping in Los Angeles. When arrested, a defendant may be given by the court a chance to get out of jail until his court date through paying a specific bail amount. However, bail bonds in Los Angeles aren’t your ticket to freedom. Rather, these ensure that you appear on the day of trial. If you deliberately fail to show up, this is called bail jumping, and it has dire consequences. The Types Of Bail Bonds You Should Know. Getting out of jail can come in several ways: being cited out and released on recognizance, both not requiring a jail bond. A defendant that is cited out is released after his arraignment and is given citation. A defendant releases on recognizance, on the other hand, is given a complete schedule of all hearing dates with the assurance that he will attend every single one of them.

In cases that can be bailed, the court carries out a certain amount depending on the crime committed along with the history of record of the defendant, to be considered as bail. If the defendant is able to pay this in the form of cash jail bond, surety jail bond and property bail bond, he will be released out of jail and will be required to attend the rest of the hearing without missing even one.

Cash jail bond is the entire amount of bond required by the court that is paid by the defendant in the form of cash bond, as the name implies. Surety jail bond, on the other hand, involves a bondsman. What Collateral Should You Use for Jail Bail Bonds. When you are arrested and charged with a crime, the judge will often establish bail. If you post or make bail, you will be able to get out of jail to continue working and living at home with your family until your scheduled court date.

However, bail is often expensive, and you may not have enough cash on hand to pay the bail amount in full. Bail bonds are often used for this purpose. Posting Bail in Orange County: How Much Do You Need? The amount of bail you need to post if you or a loved one goes to jail depends on what type of crime was committed. Each crime has a separate bail amount attached to it, and in most cases, misdemeanor crimes require a smaller bail amount than felony crimes.

The Amount of Bail You Need In Orange County, for instance, the Superior Court sets the bail schedule on a yearly basis. The following examples can help you determine what you might have to pay if you were arrested on suspicion of committing a particular crime: Misdemeanors in Orange County, California: Violation of Protective Order – Section 273.65(a): This misdemeanor requires a bail of $15,000.Lewd Conduct in Public Place – Section 647(a): $1,000 in bail is required to be released from jail.Battery Against Spouse – Section 243(e)(1): This misdemeanor requires a bail amount of $10,000 before the individual is released. Felonies in Orange County, California: How Bails are Determined and your Options. When You Can’t Afford Bail. Some people will run afoul of the law at some point in their lives. When that happens and the suspect has been put in jail, it may be time to pay for bail.

What if the charges against the suspect entail posting a six-digit sum? Generally, there are two options for Orange County defendants who couldn’t pay bail: either they serve their jail time while waiting for trial, or pay a percentage of their bail and trust the help of reputable Orange County bail bond services. Take the case of Allen Bullock who surrendered after attacking a police cruiser at the height of the Baltimore riots. He is now facing a long time in jail because his family couldn’t afford his bail amounting to over $500,000. How the Judge Sets Bails and How Bail Bonds Help. Southern California Community Bail Bond Services. Getting arrested and charged with a violation of the law can be a frightening experience, especially if it caught you off guard. Excessive Bail: How Much is Too Much? Avoid These Mistakes If You Get Arrested For DUI.

If you’re facing a DUI charge in any state or county, expect to face a difficult time even before you step into the penitentiary. To help you in a situation like this, it is best to keep a clear mind and avoid the common mistakes made by many of those arrested.