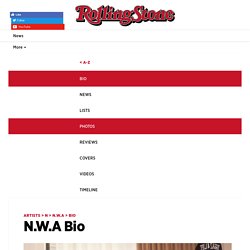 The record was among the first to offer an insider's perspective of the violence and brutality of gang-ridden South Central L.A. With songs like "Fuck tha Police" and "Gangsta Gangsta" set in a chaotic swirl of siren and gunshot sounds, it also foreshadowed the 1992 L.A. riots. In 1986, O'Shea "Ice Cube" Jackson, born and raised in a two-parent, middle-class home in South Central—and always more interested in music and books than in gangs—met Andre "Dr.

Dre" Young, who shared Cube's passion for writing rap songs. The two started writing for Eric "Eazy-E" Wright, a former drug dealer who started Ruthless Records with his profits. Hip-Hop/Rap Music Genres. Information about the Hip-Hop and Rap Music genre The Music Genres List site covers many of the most popular styles of Hip-Hop & Rap music, we hope this becomes the definitive list of Hip-Hop music / Rap music genres on the Internet, send an email to add @ musicgenreslist dot com if you feel any Hip-Hop or Rap music genres are missing and we’ll add to complete the music list. 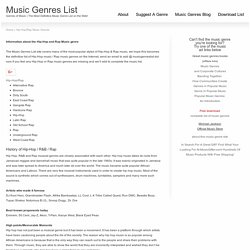 The History of Hip-Hop: The Early Years. If you start in the past and work all the way to the present, the history of hip-hop spreads out in every direction. 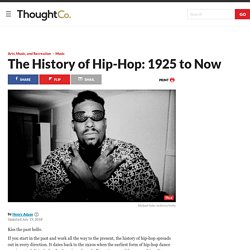 It dates back to the 1920s when the earliest form of hip-hop dance was invented. It includes the Jamaican dancehall toasting era of the 50s and 60s. It spreads to the Last Poets and Muhammad Ali and Gil Scott-Heron, who presented poems over beats. It works all the way forward to modern-day poets like Rakim, Big Daddy Kane, and The Notorious B.I.G. Rev up the time machine, dive in and explore the most comprehensive timeline of hip-hop history on the web. 1950s 1950: The Soundclash contest between Coxsone Dodd’s “Downbeat” and Duke Reid’s “Trojan” gives birth to the concept of DJ battling. 1956: Clive Campbell is born in Kingston, Jamaica. 1959: Parks Commissioner Robert Moses starts building an expressway in the Bronx. 1960s 1962: James Brown records Live At The Apollo. 1965: In a historic boxing bout, Muhammad Ali (born Cassius Clay) defeats Sonny Liston in the 6th round. 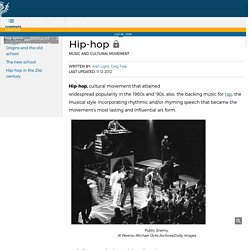 Although widely considered a synonym for rap music, the term hip-hop refers to a complex culture comprising four elements: deejaying, or “turntabling”; rapping, also known as “MCing” or “rhyming”; graffiti painting, also known as “graf” or “writing”; and “B-boying,” which encompasses hip-hop dance, style, and attitude, along with the sort of virile body language that philosopher Cornel West described ... (100 of 2,642 words) History of Hip Hop Music.