Browse By Author: A. 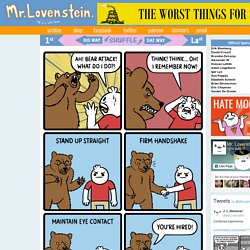 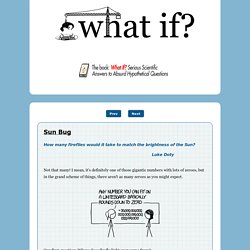 Luke Doty Not that many! I mean, it's definitely one of those gigantic numbers with lots of zeroes, but in the grand scheme of things, there aren't as many zeroes as you might expect. Our first question: Where does firefly light even come from? Fireflies may look like they're full of glow-in-the-dark goo, but the light they give off actually comes from a thin layer on their surface.[1]You can see some diagrams of the organs here and here. Firefly lights aren't "always-on. " To get the brightest light, let's assume we're using a species with a mostly-on duty cycle—like a headlight bug.

The Sun's brightness is lumens, so by simple division, it would take of those fireflies to emit the same amount of light. Let's walk through it: The first half—the numerator—is a guess for the ratio between how long the Sun has to keep glowing compared to how long a firefly does. But wait! It's going to be okay. Creativity is like breathing. What Could You Buy With $241 Trillion? What would happen if you sold everything you own, liquidated any investments you have, paid off all of your debts, and withdrew whatever cash you have in bank accounts? 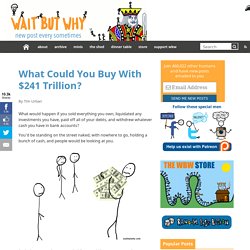 You’d be standing on the street naked, with nowhere to go, holding a bunch of cash, and people would be looking at you. And whatever cash you were holding would be your net worth. Okay now, imagine that everyone else in the world does that too (just pretend that makes sense), and all the people of the world, naked and holding their wealth in cash, come together and throw their wealth into a big pile together. How much money would be in that pile? The combined wealth of all the people of the world is $241 trillion.1 So at this point, the whole human race would be standing there together, all naked, all broke, looking at a massive pile of cash. Okay, so we’re all in a bit of an odd situation here. Now let’s spread all those bills out on the ground in a single layer. Okay enough bills. Kind of surprisingly small, right? 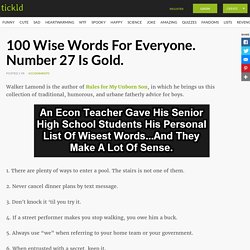 There are plenty of ways to enter a pool. The stairs is not one of them. 2. Never cancel dinner plans by text message. 3. 4. 5. 6. 7. 8. 9. 10. 11. 12. 13. This comic will change the way you look at privilege forever. Toby Morris is an Auckland-based illustrator, art director, comic artist and recently the author of Don’t Puke On Your Dad: A Year in the Life of a New Father.” 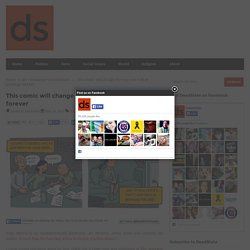 I came across this latest work by him, titled “On a Plate” that was published at The Wireless, and needless to say, it really moved me. The debate surrounding class and privilege can get muddled, but Morris’s comic has an astounding way of blasting the truth of how the social construct a person is born into can have a direct effect in the outcome of their lives, and how the cliché of “pulling yourself up by your bootstraps” is a gross oversimplification of the human experience. Iron Cowboy by Diana Palmer: A Guest Review by Nonnie - Smart Bitches, Trashy Books. Nonnie’s back! 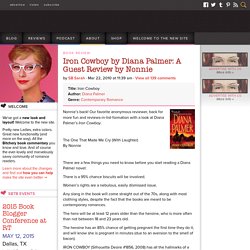 Our favorite anonymous reviewer, back for more fun and reviews-in-list-formation with a look at Diana Palmer’s Iron Cowboy. The One That Made Me Cry (With Laughter) By Nonnie There are a few things you need to know before you start reading a Diana Palmer novel: There is a 95% chance biscuits will be involved. Women’s rights are a nebulous, easily dismissed issue. Any slang in the book will come straight out of the 70s, along with most clothing styles, despite the fact that the books are meant to be contemporary romances. The hero will be at least 12 years older than the heroine, who is more often than not between 18 and 23 years old. The heroine has an 85% chance of getting pregnant the first time they do it, and will know she is pregnant in minutes (due to an aversion to the smell of bacon).

IRON COWBOY (Silhouette Desire #1856, 2008) has all the hallmarks of a typical Diana Palmer romance and more. 25 Signs You're Addicted To Books.