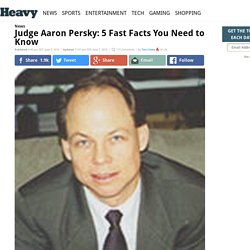 (perskyforjudge.com) A California judge who was a star athlete at Stanford University is facing calls that he be removed from the bench after he sentenced former Stanford swimmer Brock Turner to six months in jail for sexually assaulting an intoxicated woman, a punishment many have called too lenient. Santa Clara County Superior Court Judge Michael Aaron Persky sentenced Turner, 20, last week. He has not commented since the outcry over his decision because Turner is appealing his conviction. Turner was found guilty in March of three felony sexual assault charges and faced up to 14 years in prison. 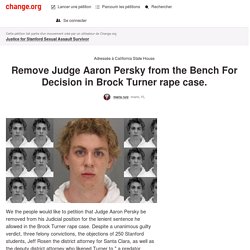 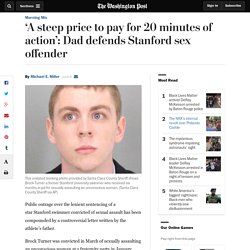 (Santa Clara County Sheriff via AP) Public outrage over the lenient sentencing of a star Stanford swimmer convicted of sexual assault has been compounded by a controversial letter written by the athlete’s father. Brock Turner was convicted in March of sexually assaulting an unconscious woman at a fraternity party in January 2015 at the elite university. He faced up to 14 years in prison. Prosecutors asked for six. Instead, Turner received only six months in jail and three years of probation after a judge worried that a stiffer sentence would have a “severe impact” on the 20-year-old.

The light sentence drew harsh criticism from prosecutors and advocates and prompted widespread fury on social media. [‘You took away my worth’: A victim’s powerful message to her Stanford rapist] Read more: The Stanford Rapist's Father Offers An Impossibly Offensive Defense Of His Son. Former Stanford University student Brock Turner was found guilty Thursday for sexually assaulting an intoxicated, unconscious woman at a campus fraternity party last year. 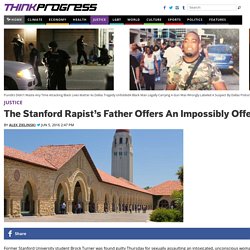 He was sentenced to six months in a county jail with probation, a ruling state officials argued was too lenient for the violent crime. Now, Turner’s father, Dan, has reportedly written a letter in opposition to his son’s sentence, blaming the case for damaging Brock’s “happy go lucky” nature and loss of appetite. “Now he barely consumes any food and eats only to exist,” Dan Turner reportedly writes. “These verdicts have broken and shattered him and our family in so many ways.” The letter was posted on Twitter by Michele Dauber, the Stanford law professor who helped draft new university procedures for penalizing sexual violence. Prior to his January 2015 arrest, Turner was on Stanford’s Varsity swim team — one of the best in the country. Brock Turner’s Friend Pens Letter of Support. On Thursday, Judge Aaron Persky gave Stanford swimmer Brock Turner, who was convicted of sexually assaulting an unconscious woman behind a dumpster, an unusually light six-month sentence, lest jail “have a severe impact on [Turner]. 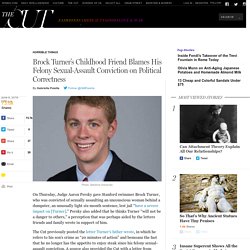 " Persky also added that he thinks Turner "will not be a danger to others," a perception that was perhaps aided by the letters friends and family wrote in support of him. The Cut previously posted the letter Turner's father wrote, in which he refers to his son's crime as “20 minutes of action” and bemoans the fact that he no longer has the appetite to enjoy steak since his felony sexual-assault conviction. A source also provided the Cut with a letter from Turner’s childhood friend Leslie Rasmussen to Judge Persky. In it, she includes a photo of Turner smiling and says there’s no way Brock could ever be a rapist, because “he was always the sweetest to everyone,” going so far as to call “the whole thing a huge misunderstanding.”

Here's The Powerful Letter The Stanford Victim Read To Her Attacker - BuzzFeed News.