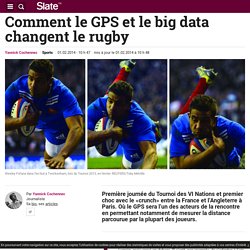 Aaron Clauset: How big data reveals that basketball, football, and hockey are all the same game. Photo illustration by Slate. 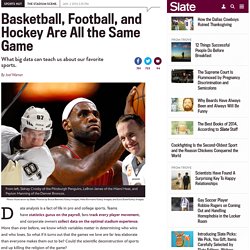 Photos by Bruce Bennett/Getty Images, Mike Ehrmann/Getty Images, and Ezra Shaw/Getty Images. Data analysis is a fact of life in pro and college sports. Teams have statistics gurus on the payroll, fans track every player movement, and corporate owners collect data on the optimal stadium experience. More than ever before, we know which variables matter in determining who wins and who loses. So what if it turns out that the games we love are far less elaborate than everyone makes them out to be?

If that’s the case, Aaron Clauset could be the man to blame. This is what Clauset does for a living. Clauset recently turned his attention to team sports, not because he’s a fan (“I’ve never really been a sports person,” he says), but because it seemed like a subject ripe for investigation. With the help of then-PhD student Sears Merritt, Clauset worked to change that. Clauset believes his big-data discoveries could prove a boon to teams and oddsmakers alike. The Role of Performance Analysts in Elite Football Club Settings. 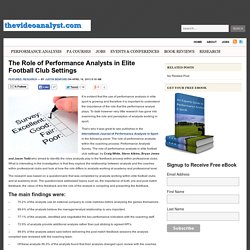 To date however very little research has gone into examining the role and perception of analysts working in sport. That’s why it was great to see publishes in the International Journal of Performance Analysis in Sport in the following piece; The role of performance analysts within the coaching process: Performance Analysts Survey ‘The role of performance analysts in elite football club settings’ by Craig White, Steve Atkins, Bryan Jones and Jason Todd who aimed to identify the roles analysts play in the feedback process within professional clubs. The research was based on a questionnaire that was completed by analysts working within elite football clubs and at academy level. The main findings were: This Guy's Quest to Track Every Shot in the NBA Changed Basketball Forever. 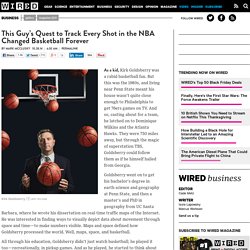 But this was the 1980s, and living near Penn State meant his house wasn't quite close enough to Philadelphia to get 76ers games on TV. And so, casting about for a team, he latched on to Dominique Wilkins and the Atlanta Hawks. They were 750 miles away, but through the magic of superstation TBS, Goldsberry could follow them as if he himself hailed from Georgia. Goldsberry went on to get his bachelor's degree in earth science and geography at Penn State, and then a master's and PhD in geography from UC Santa Barbara, where he wrote his dissertation on real-time traffic maps of the Internet.

All through his education, Goldsberry didn't just watch basketball; he played it too—recreationally, in pickup games. 12 Best Alternatives to Dartfish Express (iPhone) Smartcoach for Football. Guide du Stop motion. Understanding Video Formats. Is there anything as frustrating as trying to open a video only for it not to work? 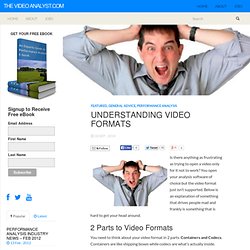 You open your analysis software of choice but the video format just isn’t supported. Below is an explanation of something that drives people mad and frankly is something that is hard to get your head around. 2 Parts to Video Formats You need to think about your video format in 2 parts. Containers and Codecs. What does a codec do? Why do we need codecs? We need to make the video smaller because uncompressed HD video runs at about 400GB per hour, making it almost impossible to share with anybody. Does compression mean we lose quality? Yes, although there are some rare exceptions, in reality there is always a trade-off between size and quality. File Extension – Container So let’s deal with this one first. Here are some of the most popular Containers; It’s very likely your videos are using one of these containers, with .MP4, .MOV and .AVCHD being the most popular.