Competing Routes for the BRP 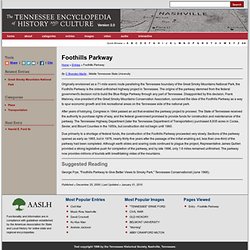 The origins of the parkway stemmed from the federal government's decision not to build the Blue Ridge Parkway through any part of Tennessee. Disappointed by this decision, Frank Maloney, vice-president of the Great Smoky Mountains Conservation Association, conceived the idea of the Foothills Parkway as a way to spur economic growth and link recreational areas on the Tennessee side of the national park. After years of lobbying, Congress in 1944 passed an act that enabled the parkway project to proceed. The State of Tennessee received the authority to purchase rights of way, and the federal government promised to provide funds for construction and maintenance of the parkway. Due primarily to a shortage of federal funds, the construction of the Foothills Parkway proceeded very slowly. Foothills Parkway.