Joy Films is one of the most prolific Film Production companies in UAE. We have a great network and the necessary resourcefulness to make anything possible. 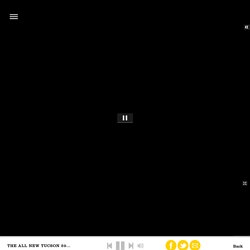 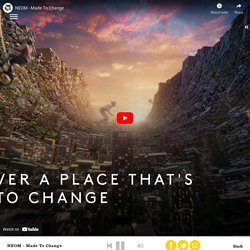 Martin Scorsese's Editor Recounts her Editing Experiences with the Director. Thelma Schoonmaker is very well -known to the ones who like to dig into the craft of filmmaking and an unknown person who does not see beyond the on-screen performances. 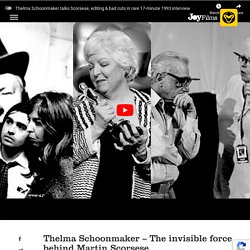 She has worked with the renowned director, Martin Scorsese for over 50 years and has edited several of his films including blockbusters such as Raging Bull, The Aviator, and the Taxi Driver. This 7-time academy award nominee didn’t have a smooth career progression. She was taking a brief film-making course at The New York University when she met Scorsese and edited his first film ever. With prerequisites such as the experience of 5 years as apprentice and 3 as an assistant to enter Motion Pictures Editors Guild her climbing the ladder was quite a ride for her.

She is known for her delicate and phenomenal application of superimpositions. Roger Deakins Oscar Winning Cinematography & Insights on Work Style. Cinematographer of some of the greatest films ever made, such as The Shawshank Redemption and A Beautiful Mind, Roger Deakins is a 4-time BAFTA Award winner. 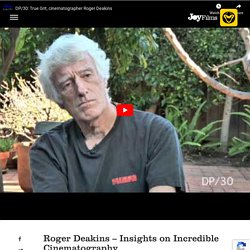 This remarkable cinematographer has worked with some of the notable filmmakers in Hollywood such as Coen Brothers and Sam Mendes. Deakins started his career in 1975 with a short film, Mothers Own. One word that describes his entire career is ‘prolific’. His consistent noteworthy work across genres is absolutely remarkable. Meaningful Insights from American Filmmaker Harmony Korine. Cosmopolitan of Las Vegas - Behind-the-Scenes Documentary. Werner Herzog - BBC News Interview on a Five-decade Filmmaking Journey. BBC Pays a Tribute to Legendary Italian Composer Ennio Morricone. John Ford - Revelations on Filmmaking, Collaborations & Personal Beliefs. Discussion to Understand the Filmmaking Perceptions of Federico Fellini. Beginning his career as a Comedy Writer, Frederico Fellini rose to fame with films such as Eight and half and La Dolce Vita. 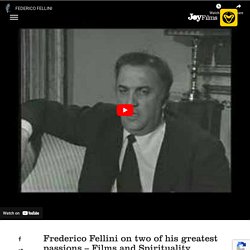 His filmmaking journey started with Variety Lights, which was co-produced and co-directed by Alberto Lattuada. Frederico regarded the process of filmmaking as a spiritual experience and always wanted to seep into the process so much so that the thin line between imagination and reality is blurred out completely. You can see the glimpse of his unusual approach in his distinctive style that blends fantasy and flamboyant images with a hint of earthiness. Throughout his career, Fellini showed relentless pursuit of art. From flying to war-stricken Libya in 1942 to work on a screenplay to bleaching his hair blond to act in his film, L’Amore, he donned a number of hats to make his art come alive on screen. Iranian Filmmaker, Abbas Kiarostami - Exclusive Interview With IU Cinema. Born in Tehran, Iran, Abbas Kiarostami was a person of many talents. He started as a painter, then went on to become a poet, filmmaker, and a photographer.

For Kiarostami, the process of filmmaking started when one drew inspiration from all what happens in his/her surroundings and life experiences. Abbas Kiarostami has some incredible Persian films to his credit such as The Runner, The Little Stranger among others. In this interview, Kiarostami reflects on creating films from one’s own experiences, his favourite filmmakers, and why a filmmaker must never look for inspiration in other films and literature. Nigel Simpkiss Directs a Unique First Video of BMW in the MENA Region. Actor Ian McKellen Reveals his Disinterest in going to Drama School.

What Advertisers and Agencies can Expect from Each Other. Barack and Michelle Obama to share stories with the world through Netflix. Netflix has announced a multiyear deal with the former US President, Barack Obama and First Lady, Michelle. 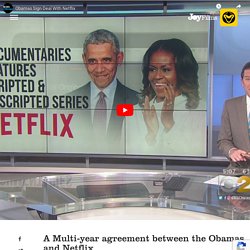 The Obamas will produce “a diverse mix of content, including the potential for scripted series, unscripted series, docu-series, documentaries and features.” Post-presidency; this deal gives the couple an international platform to reach millions worldwide. For the same the Obamas have set-up Higher Ground Productions “as the entity under which they will produce content for Netflix,” Netflix said. The Obamas mentioned that they want to harness “the power of storytelling” to promote common values. “One of the simple joys of our time in public service was getting to meet so many fascinating people from all walks of life with a wider audience, said Barack Obama. Nadine Labaki wins the prestigious Jury Award at Cannes 2018.

The New BMW Commercial “Ungovernable” Directed by Kyle Lewis. John Hegarty's Strong Take on Creativity in Advertising. The co-founder of TBWA London, the founding shareholder of Saatchi & Saatchi and an advertising giant in his own right, Sir John Hegarty’s creative insights have always been revered. 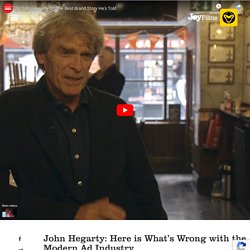 He is also the legend behind the iconic British advertising agency, Bartle Bogle Hegarty (BBH) and has been a part of several presentations, interviews and radio programmes for his undisputed services to the advertising and creative industry. BBH has become the frontrunner in the industry with several laurels and accolades to its credit. In this video, Hegarty is seen talking about tenets of advertising wisdom and his school of thought which bases itself in presenting the truth and great storytelling. Since 1965, Hegarty’s lessons have been the backbone of some seminal and groundbreaking ad campaigns such as Levi’s, Audi, Phileas Fogg, Axe, Johnnie Walker, The Guardian Three Little Pigs TV commercial, Volkswagen among others.

AdAge on John Hegarty’s Interview. The Ad that has Become a Milestone. July 1, 1941 goes down in history as the day when the first ever legal TV commercial was aired. 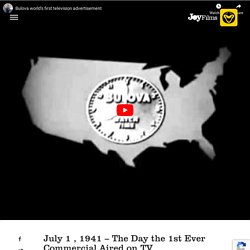 The ad was of Bulova watch. It was aired on TV on WNBT channel owned by NBC (National Broadcasting Company). James Lees creates awareness by the #ShakeParkinsonsOff film. Helmed by James Lees via La Pac; The film, #ShakeParkinson’sOff launched on World Parkinson’s Day on April 11, 2018 is part of a campaign to raise awareness about its early onset and an appeal for donations. 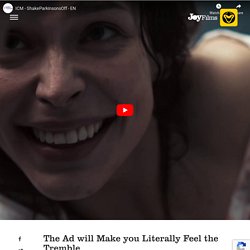 France is home to 1,50,000 Parkinson’s patients with 8000 new patients each year. This powerful campaign by France’s ICM (Institut du Cerveau et de la Moelle épinière / the Brain and Spinal Cord Institute) uses haptic technology to let mobile viewers experience the devastating tremors of Parkinson’s by triggering mobile vibrations. The film shows us the life of Tom, right from his childhood to old age. It highlights the key emotional experiences such as the birth of his child or him going through an accident that would surely leave him trembling. But as the ad progresses, we are bound to question if this is because of the intense emotions he experiences or is it a sign of a dangerous disease. 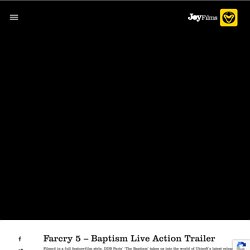 Director Martin de Thurah introduces viewers to the dangerous yet charismatic prophet Joseph Seed – the main antagonist. According to Martin, “Joseph is out of reach, and it touches a very uneasy place for us – a psychopath who is unpredictable. It’s very scary and unsettling.” The Lurpak Softest spot rekindles love for gorgeous looking food. IKEA Human Catalogue: Human Approach changes it all for the brand. John Ford - Revelations on Filmmaking, Collaborations & Personal Beliefs. JFK Unsilenced - A Powerful Recreation of JFK's last speech. Fifty-five years ago, this was the speech that legendary orator and 35th US President, John F.

Kennedy was supposed to deliver at the Dallas Trade Mart but was assassinated en route to the venue on November 22, 1963. But Agency Rothco and The Times proved that with today’s powerful technology, a speech never made could be heard and a new perspective to the death news of JFK could be shared. The winner of Cannes Lions’ Creative Data Grand Prix award this year, the spot has been covered by 59 countries worldwide and had an editorial reach of over a billion.

Apart from the Grand Prix, the commercial also won One Shows, D&AD Pencils and Gold, Silver and Bronze Lions. Accenture Interactive agency Rothco reviewed 831 JFK speeches and interviews and painstakingly engineered sounds to synchronise well among several sound qualities and background noises, for the speech to appear smooth and delivered in Kennedy’s own voice. Iceland's Environment-friendly Christmas ad gets banned. Voiced by Emma Thompson, Iceland Food’s Christmas advert highlights the devastation caused by palm oil producers, yet ends up getting banned for being too political. UN recently issued a warning stating that we only have 12 years to stop irreversible damage to the Earth, and while significant retailers across the globe were busy creating saccharine Christmas ads to make us cry, Iceland thought of acquainting us with the ground reality.

With the video, they announced their decision to stop using palm oil as an ingredient in all their label products by the end of 2018, which going by the number of products is a significant move for the supermarket chain. The short film created by Greenpeace, an environmental NGO, and repackaged by Iceland showcases the sad plight of an Orangutan whose rainforest habitat got destroyed due to palm oil growers. Heinken's New Campaign, 'Cheers to the Unexpected' Celebrates Spontaneity. Heineken’s new U.S.- centric “Cheers to the Unexpected” campaign is a toast to spontaneity and the adventure of life. This latest spot, “New Friends” created by Publicis Worldwide New York celebrates those unexpected moments in life that take us by surprise.

Sprite plays the peacemaker between Aliens & Humans. Joy Films brings ‘Cirrus’ to life for Emirates Airline. Making ‘Power of Confidence’ - a Toyota car commercial. The First Look of the Documentary on Famous Musician Amy Winehouse. The Making of the King. 'Nothing Beats a Londoner' - Celebrating Londoners’ Athletic Attitude. The relationship among the Creative, The Agency and Production house. The Ad that has Become a Milestone. The Ultimate Location Scouting Checklist to Find the Perfect Shooting Spot in 2019. Joy Films brings ‘Cirrus’ to life for Emirates Airline. Taking the audience on a sensory journey for Karmi. Ad Film Production House in Dubai - About Joy Films. Joy Films - Film Production Equipment & Camera Rental for Shoot in Dubai. Dubai Expo 2020 - Welcome the Future.