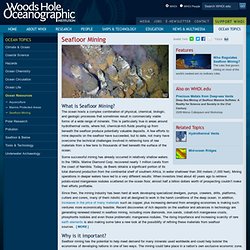 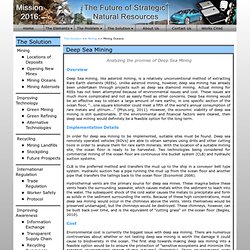 Unlike asteroid mining, however, deep sea mining has already been undertaken through projects such as deep sea diamond mining. Actual mining for REEs has not been attempted because of environmental issues and cost. These issues are much more complicated and not as easily fixed as other concerns. Implementation Details In order for deep sea mining to be implemented, suitable sites must be found. CLB is the preferred method and transfers the mud up to the ship in a conveyor belt type system. Hydrothermal vents are the primary source for deep sea mines. Cost Environmental cost is currently the biggest issue with deep sea mining. However, this problem is not be nearly as troublesome as it may at first appear.

Case Study Possible Timeline Adriano, J. Man-sized robot jellyfish made out of silicone could patrol US waters as an aquatic spy and study life on the ocean floor. Jellyfish are attractive candidates to mimic because of their ability to consume little energy owing to a lower metabolic rate than other marine speciesCyro, the robotic jellyfish is powered by a rechargeable nickel metal hydride batteryThe skin is made of a thick layer of silicone, squishy in one's hand. 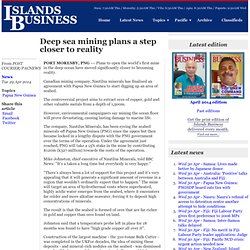 Canadian mining company, Nautilus minerals has finalised an agreement with Papua New Guinea to start digging up an area of seabed. The controversial project aims to extract ores of copper, gold and other valuable metals from a depth of 1,500m. However, environmental campaigners say mining the ocean floor will prove devastating, causing lasting damage to marine life.

Designing the World's First Floating City. UPDATE JAN. 2014 Thank you to everyone who supported this effort! 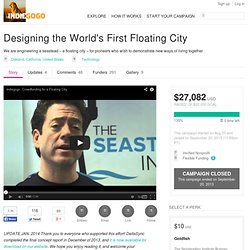 DeltaSync completed the final concept report in December of 2013, and it is now available for download on our website. We hope you enjoy reading it, and welcome your feedback at info@seasteading.org. Google May Be Launching Floating Data Centers Off U.S. Coasts. Google, one of the world's largest users of data, may finally be making good on a five year-old patent to build offshore data centers — cooled and powered by the ocean, and potentially beyond reach of the government. 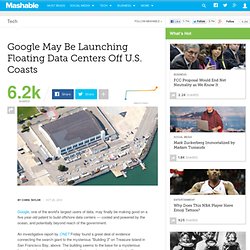 An investigative report by CNET Friday found a great deal of evidence connecting the search giant to the mysterious "Building 3" on Treasure Island in San Francisco Bay, above. The building seems to the base for a mysterious four-story structure on a nearby barge that experts say is consistent with a floating data center. Meanwhile, a very similar four-story building was towed on a barge into harbor in Portland, Maine, two weeks ago. On Wednesday, the Portland Herald speculated that the barge may have something to do with Google's offshore data center patent. The Portland barge is registered to the same shell company connected to the Treasure Island operation, called By And Large — very similar to the fictional "Buy and Large" company featured in several Pixar movies. Black Smokers. Newby found a video showing a black smoker in the Juan de Fuca ridge system near Vancouver Island. 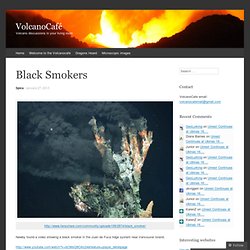 During the expeditions of the Nautilus many here have been watching the ROV Herkules exploring some black smokers in the Mediteranian Sea. So i thought I´d try to portrait them in a post. Nautilus Minerals Inc. - 2012 Programs - Fri Feb 15, 2013. The focus of exploration activity in 2012 was a seismic data acquisition program on Nautilus Minerals' 100% owned exploration and mining licences in the Bismarck Sea of Papua New Guinea. 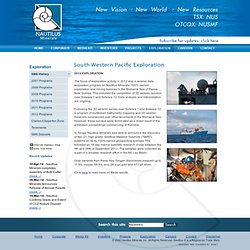 This included the completion of 3D seismic surveys over Solwara 1 and Solwara 12. Data analysis and interpretation are ongoing. Following the 3D seismic survey over Solwara 1 and Solwara 12; a program of multibeam bathymetry mapping and 2D sesimic traverses commenced over other tenements in the Bismarck Sea. However, these surveys were terminated as a direct result of the arbitration proceedings commencing at that time. In Tonga, Nautilus Minerals was able to announce the discovery of two (2), high grade, Seafloor Massive Sulphide ("SMS") systems on its its 100% owned prospecting licenses This followed an 18 day marine scientific research cruise between the 9th and 26th of September 2012. Click here to read more on these results. Nautilus Minerals Inc. - Board & Management - Sat Oct 26, 2013. Dr. 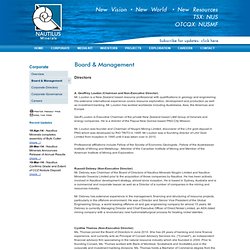 Mohammed Al Barwani (Non-Executive Director)Dr. Mohammed Al Barwani joined the Board in September 2012. He is founder and Chairman of MB Holding Co. LLC (MB Group), has a Bachelor's Degree in Science from Miami University, Ohio, USA, and has a Master's Degree and PhD in Petroleum Engineering from Herriott-Watt University, Edinburgh, UK. Deep Sea Mining: Out Of Our Depth » Deep sea riches could spark Pacific mining boom. Radio National Background BriefingAnn Arnold20 October 2013 A project to dig minerals from the seabed off Papua New Guinea could signal a new era of mining in the world’s most remote and least understood environment, the deep sea. 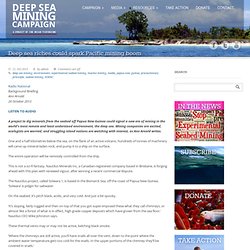 Mining companies are excited, ecologists are worried, and struggling island nations are watching with interest, as Ann Arnold writes. Tapping the Oceans Mineral Wealth With Deep Sea Mining. No one knows how many hydrothermal vent sites are in the oceans, but there is a best guess. Amazingly, when scientists who have studied different parts of the ridge system compared notes at the April WHOI conference, they realized they were all coming up with the same distance between known, large active vent sites: 100 kilometers. Deep Sea Mining.