What does the university gender gap mean for the future of our society? As any university lecturer can attest, the £9,000 fee regime has had a series of negative impacts on student, institution and teacher alike. 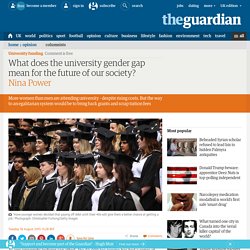 Students, particularly outside the Russell Group universities, are often exhausted or absent from class owing to the multiple jobs they have to take on in order to pay rent and buy food. Anxiety about their future, exacerbated by the tens of thousand pounds of debt they have taken on, starts to filter through to classroom discussions and group comportment. Students are less the demanding “clients” the government and management like to imagine they are, and more just scholars flailing to reach the library from somewhere in the middle of an ocean of worry. Perhaps surprisingly, one consequence of the fee increase is the impact on gender. As the gap between men and women going to university grows to its highest level in modern times, we should ask ourselves what this means for the future of higher education, work and gender relations. Resources. Poverty, place and ageing society. EmbedEO.pdf.

Defining Diversity. There are many definitions of Diversity. 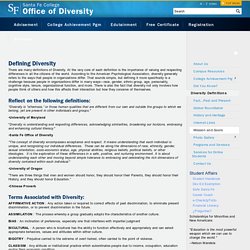 At the very core of each definition is the importance of valuing and respecting differences in all the citizens of the world. According to the American Psychological Association, diversity generally refers to the ways that people in organizations differ. That sounds simple, but defining it more specifically is a challenge because people in organizations differ in many ways—race, gender, ethnic group, age, personality, cognitive style, tenure, organizational function, and more. There is also the fact that diversity not only involves how people think of others and how this affects their interaction but how they conceive of themselves. Reflect on the following definitions: "Diversity is “otherness,” or those human qualities that are different from our own and outside the groups to which we belong, yet are present in other individuals and groups. " -University of Maryland -Santa Fe Office of Diversity -University of Oregon -Chinese Proverb. 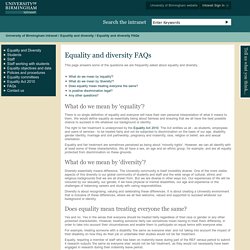 What do we mean by ‘equality’? There is no single definition of equality and everyone will have their own personal interpretation of what it means to them. We would define equality as essentially being about fairness and ensuring that we all have the best possible chance to succeed in life whatever our background or identity.

The right to fair treatment is underpinned by the Equality Act 2010. The Act entitles us all - as students, employees and users of services - to be treated fairly and not be subjected to discrimination on the basis of our age, disability, gender identity, marriage and civil partnership, pregnancy and maternity, race, religion or belief, sex and sexual orientation. Equality and fair treatment are sometimes perceived as being about ‘minority rights’. What do we mean by ‘diversity’? Diversity essentially means difference. Does equality mean treating everyone the same?

Yes and no. Gavin Grimm, Transgender Teen, Fighting To Use Men's Restroom At School. A transgender teen in Virginia is fighting for the right to use the bathroom that corresponds with his gender identity. 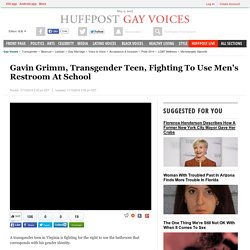 “The issue for me is that the only proposal to be voted on December 9 is for Gavin to go back to using the girls restroom, and there needs to be another proposal, because Gavin is not going to use the girls restroom, not going to happen. Gavin is a boy,” Grimm's mother reportedly stated. Transgender students and school districts regularly battle over issues like this. This Teacher Taught His Class A Powerful Lesson About Privilege. 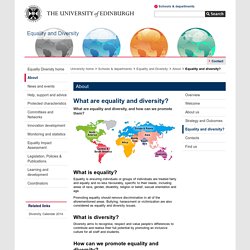 What is equality? Equality is ensuring individuals or groups of individuals are treated fairly and equally and no less favourably, specific to their needs, including areas of race, gender, disability, religion or belief, sexual orientation and age. Promoting equality should remove discrimination in all of the aforementioned areas. Bullying, harassment or victimization are also considered as equality and diversity issues. Meeting the needs of UK and international bilingual students. If someone is to navigate a culture, you can only do that if you have understanding of the language. 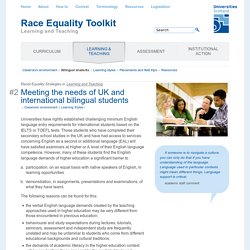 Language used in particular contexts might mean different things. Language support is critical. academic staff comment Universities have rightly established challenging minimum English language entry requirements for international students based on the IELTS or TOEFL tests. Those students who have completed their secondary school studies in the UK and have had access to services concerning English as a second or additional language (EAL) will have satisfied examiners at Higher or A level of their English language competence. However, many of these students find the English language demands of higher education a significant barrier to.