This is why the Law of Attraction might not be Working for you - The Minds Journal. Lets say you want to earn $10,000 per month but you have the belief that “People like me don’t earn that kind of money”, no matter how many times you affirm, “I’m now attracting a $10,000 monthly income″, the law of attraction will match your belief that people like you don’t earn that kind of money. 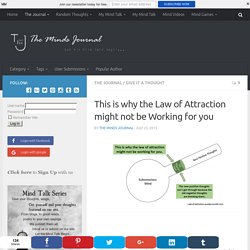 Dear Empath, we need you. - The Minds Journal. To those who soak up the world’s energy like a sponge… You play a critical role here. 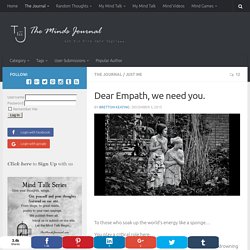 You may not feel it sometimes. Sometimes it feels like you’re drowning in a sea of other people’s feelings, uncertain which waves have poured over from foreign waters and which come from your own deep center, far too immersed to reach, at least in this lifetime. Everyone Was Warned Not to Touch Him – But This Guy Did - Life Hackology. Man picks this cat up off the ground and tries to carry him home. 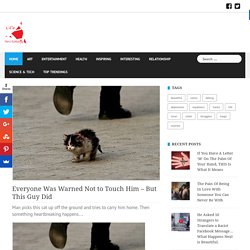 Then something heartbreaking happens… Everyone in the apartment complex where I lived knew who Ugly was. Ugly was the resident Tomcat. Ugly loved three things in this world: fighting eating, garbage, and shall we say love. The combination of these things combined with the life spend outside had their effect on Ugly. To start with, he only had one eye, and where the other should of been was a gaping hole. Every time someone saw Ugly there was the same reaction. All the children were warned not to touch him, the adults threw rocks at him, hosed him down, squirted him when he tried to come close to their homes, or shut his paws in the door when he would not leave.

Ugly always had the same reaction. One day Ugly shared his love with the neighbors huskies. According To These Astrological Predictions, 2016 Is Going To Be A Very Good Year! - Life Hackology. With a new year coming up, it’s time to think about what the future holds! 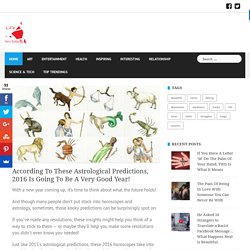 And though many people don’t put stock into horoscopes and astrology, sometimes, those kooky predictions can be surprisingly spot on. If you’ve made any resolutions, these insights might help you think of a way to stick to them — or maybe they’ll help you make some resolutions you didn’t even know you needed! Just like 2015′s astrological predictions, these 2016 horoscopes take into consideration the unique traits of the signs and show you how to use those traits to solve the problems that come your way. But if you think astrology is a lot of superstitious hooey? Proactive or Reactive ? - My Mind Talk - The Minds Journal. People these days judge more which makes them react to life rather than living it. 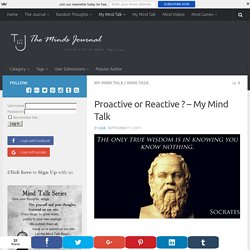 This is result of being reactive and not proactive. Reactive here means you initially have no agenda but only resultants from the events around. You let yourself be tossed and drowned and again rise up by the tides of life to put your words forth. Each new wave that hits you catches you by surprise. Breathless you hastily scramble to react in order to keep floating on the surface. Because of those who let me down - The Minds Journal. The Pain Of Being In Love With Someone You Can Never Be With - Life Hackology. Love is a tricky thing. 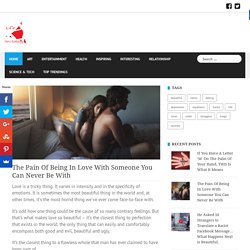 It varies in intensity and in the specificity of emotions. It is sometimes the most beautiful thing in the world and, at other times, it’s the most horrid thing we’ve ever come face-to-face with. It’s odd how one thing could be the cause of so many contrary feelings. But that’s what makes love so beautiful – it’s the closest thing to perfection that exists in the world, the only thing that can easily and comfortably encompass both good and evil, beautiful and ugly. It’s the closest thing to a flawless whole that man has ever claimed to have been part of. If You Have A Letter ‘M’ On The Palm Of Your Hand, THIS Is What It Means - Life Hackology. Palmistry is an ancient art whose roots have been traced back several thousand years to India, where it was born from Hindu astrology and first mentioned in the Chinese book the I Ching. 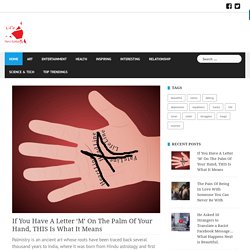 It quickly spread all over Asia and Europe, whereupon Aristotle took up an interest in it and passed the knowledge on to Alexander the Great. The Macedonian king often used it to judge the character of his military officers and would closely read the lines of their palms. It must have helped him out because in fifteen years of nonstop conquest he never lost a single battle.

The practice has since endured throughout the ages. Today, most people view it as pseudo-science and are quick to dismiss it as superstitious beliefs. One specific attribute that people often wonder about is the appearance of the letter “M” on the palm of the hand. Furthermore, people whose palms have the letter M are masters at seeing through lies and deceit. There is a lot more information and many details covered in the video.