Endangered Species Chocolate - Natural and Organic, Fair Trade, Ethically Traded, Dark Chocolate and Milk Chocolate Bars and Gifts. A wake-up call on saving endangered species. Photos of Endangered Species That Are Going Extinct. Rodin Eckenroth/Stringer/Getty Images Wildlife numbers are rapidly decreasing around the world, with up to one million species facing extinction in the coming decades. 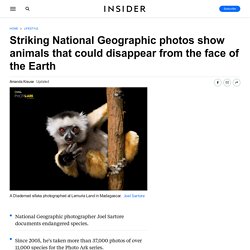 Few people likely understand this better than wildlife photographer Joel Sartore. According to his website, Sartore was working as a photographer at National Geographic in 2005 when his wife Kathy was diagnosed with breast cancer. "I was 42 at the time, and as Kathy recovered, one question continued to haunt me: How can I get people to care that we could lose half of all species by the turn of the next century? " 10 Rare Endangered Species Soon To Be Extinct. 10 of the Most Famous Endangered Species. Animals in Danger of Extinction. Endangered Species List and Pictures. Endangered animals are animals that are at a very high risk of becoming extinct in the wild. 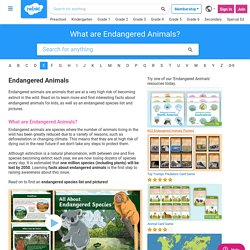 Read on to learn more and find interesting facts about endangered animals for kids, as well as an endangered species list and pictures. What are Endangered Animals? Endangered animals are species where the number of animals living in the wild has been greatly reduced due to a variety of reasons, such as deforestation or changing climate. This means that they are at high risk of dying out in the near future if we don't take any steps to protect them. Endangered Animals! Endangered Species Act. A manatee glides through clear, warm spring water in Florida. 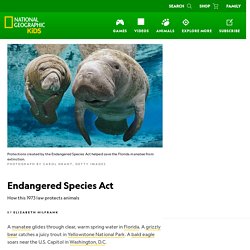 A grizzly bear catches a juicy trout in Yellowstone National Park. A bald eagle soars near the U.S. Capitol in Washington, D.C. Meet Some of the World's Most Endangered Animals. The most endangered species on Earth. In 2019, the Trump administration announced several rollbacks to the Endangered Species Act. 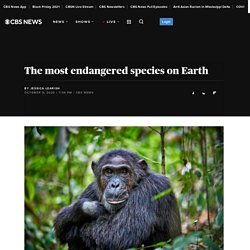 The changes made it easier to remove animals from legally protected status and allowed commercial projects to take place on land previously deemed critical habitat. This policy only impacts conservation efforts in the United States. But around the world, ecosystems and wildlife face growing threats from human activities, habitat loss and climate change.

Wildlife Conservation For Kids. We are reader-supported. 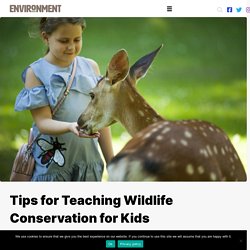 When you buy through links on our site, we may earn affiliate commission. Childhood lessons continue to influence kids throughout their lives, which is why it’s so important to make sure you’re teaching your kids what they need to know about life and the planet. By teaching your kids about wildlife conservation today, you can help ensure they’re kind to their environment even when they’re all grown up. As climate change and unsustainable practices continue around the world, people are spending more and more leisure time inside in front of screens.