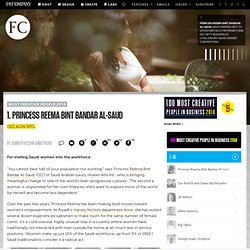 "You cannot have half of your population not working," says Princess Reema Bint Bandar Al-Saud, CEO of Saudi Arabian luxury retailer Alfa Intl., who is bringing meaningful change to one of the world's least-progressive cultures. "The second a woman is responsible for her own finances, she'll want to explore more of the world for herself and become less dependent. " Over the past two years, Princess Reema has been making bold moves toward women's empowerment. At Riyadh's Harvey Nichols department store, she has ousted several dozen experienced salesmen to make room for the same number of female clerks. It's a controversial, highly unusual step in a country where women have traditionally not interacted with men outside the home at all, much less in service positions. 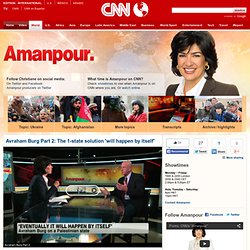 That may seem a strange statement, especially from an orthodox Jew and former speaker of the Knesset, but Burg says it is unhealthy. “It’s too much,” he told CNN’s Christiane Amanpour. “If you are traumatized, go through it. Don’t deny it. For Israeli Prime Minister Benjamin Netanyahu to compare Iran to Germany in 1938, Burg said, is exploiting Israel’s traumas. “I write about the different strategy for the future memory,” he said. Self-Hating Israeli: Avraham Burg. Avraham Burg. 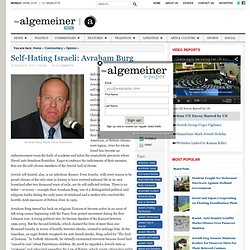 Photo: David Shankbone. Self-hating Jews have long been conspicuous in the Jewish world, fearfully and self-righteously distancing themselves from their people and even aligning with its enemies. For centuries Court Jews collaborated with Christian rulers to preserve their own wealth and stature. Jews who opposed Zionism lest a Jewish state challenge their loyalty as German, American, or British citizens were legion. Jews for whom Israel has become an embarrassment roam the halls of academe and infest the journalistic precincts where liberal anti-Semitism flourishes. Jewish self-hatred, alas, is an infectious disease. Avraham Burg turned his back on religious Zionism to become active in an array of left-wing causes beginning with the Peace Now protest movement during the first Lebanon war. Avraham Burg, the 'Times' and 'Anti-Zionism' 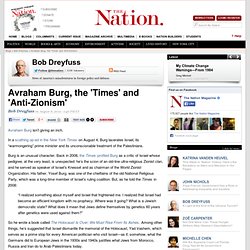 In a scathing op-ed in the New York Times on August 4, Burg lacerates Israel, its “warmongering” prime minister and its unconscionable treatment of the Palestinians. Burg is an unusual character. Back in 2008, the Times profiled Burg as a critic of Israel whose pedigree, at the very least, is unexpected: he’s the scion of an old-line ultra-religious Zionist clan, and he served as speaker of Israel’s Knesset and as chairman of the World Zionist Organization. His father, Yosef Burg, was one of the chieftains of the old National Religious Party, which was a long-time member of Israel’s ruling coalition. “I realized something about myself and Israel that frightened me.

So he wrote a book called The Holocaust Is Over; We Must Rise From Its Ashes. In his op-ed, Burg slams Mitt Romney for his callous anti-Iran rhetoric while seeking to profit from snuggling up to Benjamin Netanyahu: The winds of isolation and narrowness are blowing through Israel. Israel and the psychology of “never again” Why does Israel continue to act against its own interests? 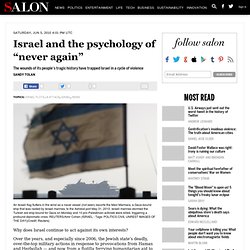 Over the years, and especially since 2006, the Jewish state’s deadly, over-the-top military actions in response to provocations from Hamas and Hezbollah — and now from a flotilla ferrying humanitarian aid to Gaza — have backfired. And in each case, the Jewish state has grown less secure by increasing its international isolation and fueling fury much closer to home. Four summers ago, Israel’s war in Lebanon displaced a million people in an attempt to crush Hezbollah, which grew from the settling dust and resentment of an Israeli invasion a generation earlier. But the 2006 war only made Hezbollah stronger. Israel could have predicted such consequences. Then came another kind of confrontation, from a civilian flotilla armed with food, toys, books, medical supplies and a mission to break the blockade of Gaza.

The unwillingness of the United States and the EU to break the stranglehold led directly to this week’s calamity. Anonymous hits Israel over Gaza strikes. During Israel’s Operation Pillar of Defense against Palestinians in Gaza last November, Anonymous hackers launched a mass attack on Israeli government websites. 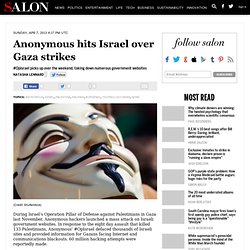