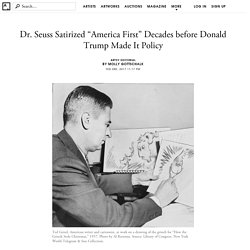 Seuss stopped drawing for PM in 1943, and went on to join the army as a captain, where he created propaganda films while working under Frank Capra. He returned to creating children’s books following the war, and his classic 1954 book Horton Hears a Who! Is seen by many as both an apology and an allegory of the American occupation of Japan. In it, a big-hearted elephant teaches youngsters that “a person’s a person, no matter how small.”

Horton Hears a Who! If you go back and re-read some of his most famous books through this lens, you’ll find discreet appeals to the nation’s most tender and malleable minds, promoting tolerance, resistance, and awareness. Dr. “Yertle the Turtle, when Dr. Likewise The Sneetches and Other Stories (1953), named for yellow creatures—some born with stars on their bellies, some without—cautions against racial prejudice. La tragedia invisible de Nigeria. “Como insectos”. 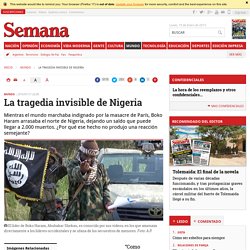 It's a common refrain in certain circles--that today it's only the quality of content that matters, not whether it comes from an entertainment production company, a news organization, or a brand. 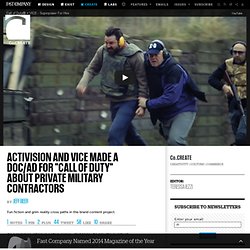 The bottom line is whether it's worth a viewer's time. Brands continue to push the boundaries of the types and scope of content they're willing and able to produce, and a new documentary series by Activision and Vice is the latest example. The latest game in the record-breaking franchise is Call of Duty: Advanced Warfare, in which Kevin Spacey makes an appearance as a power-hungry head of a private military contract firm. To help market and set the context for the game, Activision and agency 72andSunny teamed with Vice on a short documentary called Super Power for Hire, to be followed by a more in-depth, longer version later in May. The short film features interviews with Blackwater founder Erik Prince and The New York Times' national security correspondent David Sanger, among many others. We're All Celebrities Now: Can Micro-Endorsements Become The New Klout Perk?

When Klout launched in 2008, it unleashed a new sort of status competition on the Internet. (And more than a touch of skepticism about its product.) Retweets and Likes had always been an implicit competition--it’s part of what makes the platforms that encourage them so addictive--but never before had that influence so clearly translated into a concrete “score.” The Klout Score became not just a bragging point, but in some cases, a metric for hiring. The whole system was, of course, designed for the benefit of marketers. With social media, everyone had been given an opportunity that had once been reserved for celebrities: the ability to amplify their opinions beyond the people in their social circles. The Kids Are Alright: Millennials Want Meaningful Jobs That Fix Social Problems. If your only source of information about millennials comes from articles about millennials written by the generation that directly preceded it, an image of a person aged roughly 18 to 30-years-old might look like a self-absorbed monster--a kid on a couch whose dead brain cells leak through his nose and onto his iPhone while he refuses to get a job. 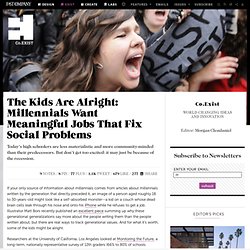 Illustrator Matt Bors recently published an excellent piece summing up why these generational generalizations say more about the people writing them than the people written about, but there are real ways to track generational values. And for what it’s worth, some of the kids might be alright. Researchers at the University of California, Los Angeles looked at Monitoring the Future, a long-term, nationally representative survey of 12th graders (66% to 80% of schools participate) that has most often been used to measure drug attitudes since the mid 1970s.

Their hypothesis was confirmed. Empowering A New Generation Of Tech-Savvy Women By Teaching Them To Code. You’ve probably had that feeling once or twice: that sooner or later, you’re going to need to learn to code. As a writer or editor or anyone whose job depends on the Internet, it can be frustrating--if not downright scary--to ponder how much you rely on something you don’t understand. It was for Adda Birnir. "I was working on a magazine in 2008, and they were laying off dozens of people on the editorial side and giving people raises in the tech department," says Birnir.