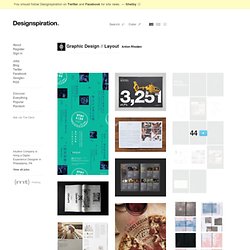 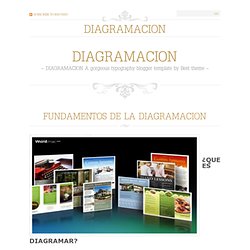 Blueprints For Web And Print: Specctr, A Free Adobe Illustrator Plugin. Advertisement Have you ever submitted design files to a development team for production and a few weeks later gotten something back that looks nothing like your original work? 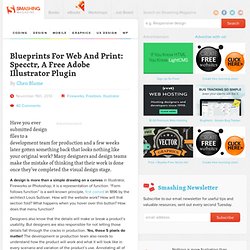 Many designers and design teams make the mistake of thinking that their work is done once they’ve completed the visual design stage. A design is more than a simple drawing on a canvas in Illustrator, Fireworks or Photoshop; it is a representation of function. “Form follows function” is a well-known principle, first coined in 1896 by the architect Louis Sullivan. How will the website work? Designers also know that the details will make or break a product’s usability. Specctr is a plugin for Adobe applications. Note: The Specctr plugin for Adobe Illustrator has two versions, Lite and Pro. Overview Of Specctr For Illustrator Adobe Illustrator is a favorite tool of many designers because of its flexibility and versatility. The width and height of elements;text specifications (font family, font size, font color). 1. 2. Speckyboy Design Magazine - Web Design, Development and Graphic Design Resources.

Copenhagen: The Good Life. Copenhagen may be one of the world's most livable cities, but navigating the surplus of reasons why it is indeed a crowd favorite—from shops to restaurants to monuments—can feel like a heavy task for even the savviest of tourists. 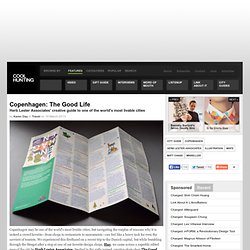 We experienced this firsthand on a recent trip to the Danish capital, but while bumbling through the Strøget after a stop at one of our favorite design shops, Hay, we came across a superbly edited map of the city by Herb Lester Associates. Spotted in the aptly named, creative skate shop The Good Life, Lester's guide immediately became an invaluable tool to have on hand, and later on, a souvenir worth framing. "Copenhagen: The Good Life" is one of many uniquely illustrated city guides made by the seemingly map-obsessed team at Herb Lester Associates. But their fixation on high design doesn't end with smart layouts and handsome typography—the content inside is reason enough to pick one up.

XyCSS.com. 10 Illustrations From The Dawn Of Graphic Design. In August of 1922, William Addison Dwiggins, a book designer and the designer of Caledonia (a font you’ll likely find on the computer you’re using to read this), published an op-ed in The Boston Evening Herald. 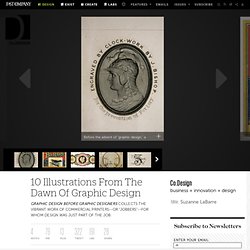 In his essay, "A New Kind of Printing Calls for New Design", Dwiggins proposed a new name for the commercial art that he and his contemporaries were doing: “graphic design.” Today we (maybe lazily) use that term as a catch-all to describe 2-D creative work. But before it was distinguished from fine art, “graphic design” was simply one aspect of the average printer’s job description. A typical printer was both a designer and a crafts-person, laying out and producing commercial jobs, like invitations, posters, and ad signage.

Call to Action Buttons: Examples and Best Practices - Smashing Magazine. Advertisement Call to action in web design — and in user experience (UX) in particular — is a term used for elements in a web page that solicit an action from the user. 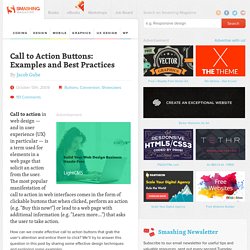 The most popular manifestation of call to action in web interfaces comes in the form of clickable buttons that when clicked, perform an action (e.g. "Buy this now! ") or lead to a web page with additional information (e.g. "Learn more…") that asks the user to take action. How can we create effective call to action buttons that grab the user’s attention and entice them to click? Best Practices for Effective Call to Action Buttons Designing call to action buttons into web interfaces requires some forethought and planning; it has to be part of your prototyping and information architecture processes in order for them to work well. Draw user attention with size In web pages, the size of an element relative to its surrounding elements indicates its importance: the larger the element is, the more important it is.

Diagramación libro de Fernando Gonzalez. Could A Redesign Really Rescue USA Today? “Gannett’s 78 newspapers spread over 30 states and two island territories are textbook examples of how to succeed financially in the newspaper business. 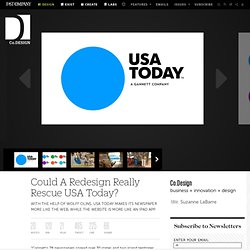 Most are small, with the average circulation about 34,000, and almost all are extremely profitable.” That’s Larry Kramer, now the president and publisher of USA Today, reporting for The Washington Post in 1979. At the time, newspapers were facing new competition from the growth of television and radio as news media. Gannett’s collection of smaller papers, which delivered local news broadcasts left out, was a hit.

But Gannett’s biggest hit came a few years later. “[USA Today] was like the Internet before the Internet, because a lot of the tools making news successful on the Internet are the same tools,” Kramer told Fast Company at a meeting in New York this week. The last dynamic logo we saw was also from a media company that was trying to reinvent itself. AOL’s approach to this idea didn’t go over so well with the design community. How do colors affect purchases? Web Fonts.