10 Exercises To Fuel Creative Thinking. Re-Design Innovation. 7D FosteringGoods™ is a conceptual model and a systematic process for the development and acceleration of new products and services based on a Design Thinking approach. 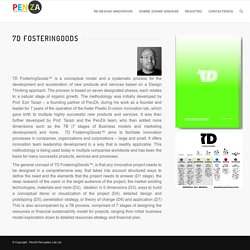 The process is based on seven designated phases, each relates to a natural stage of organic growth. The methodology was initially developed by Prof. Ezri Tarazi – a founding partner of PenZA, during his work as a founder and leader for 7 years of the operation of the Keter Plastic D-vision innovation lab, which gave birth to multiple highly successful new products and services. It was then further developed by Prof. Tarazi and the PenZA team, who then added more dimensions such as the 7B (7 stages of Business models and marketing development) and more. 7D FosteringGoods™ aims to facilitate innovation processes in companies, organizations and corporations – large and small. The Key To Creative Insight Can Be Simpler Than You Think. Sometimes a creative breakthrough comes when we're not doing anything creative at all. 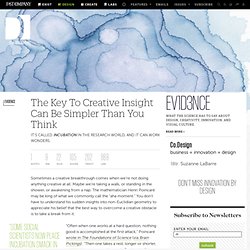 Maybe we're taking a walk, or standing in the shower, or awakening from a nap. The mathematician Henri Poincaré may be king of what we commonly call the "aha moment. " You don't have to understand his sudden insights into non-Euclidian geometry to appreciate his belief that the best way to overcome a creative obstacle is to take a break from it. "Often when one works at a hard question, nothing good is accomplished at the first attack," Poincaré wrote in The Foundations of Science (via Brain Pickings). "Then one takes a rest, longer or shorter, and sits down anew to the work. The Body Language Of Creative Thinkers. You can tell a lot about a person's mental state just by looking at their body language. 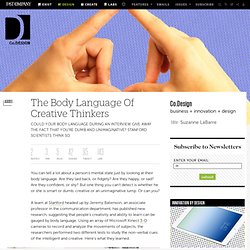 Are they laid back, or fidgety? Are they happy, or sad? Are they confident, or shy? But one thing you can't detect is whether he or she is smart or dumb, creative or an unimaginative lump. Or can you? A team at Stanford headed up by Jeremy Balienson, an associate professor in the communication department, has published new research, suggesting that people's creativity and ability to learn can be gauged by body language. In the first study, the researchers chose one subject as a "teacher" and primed them on several principles of a subject they knew little about: water efficiency.

What the Stanford scientists learned was that the more exaggerated a student's upper-body movements were while they were being taught, the less likely they were to score well on the test afterwards. [H/T Stanford] The Daily Routines Of 26 Of History's Most Creative Minds. Even Beethoven and Balzac had just 24 hours in a day. 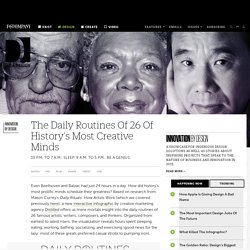 How did history's most prolific minds schedule their greatness? Based on research from Mason Currey’s Daily Rituals: How Artists Work (which we covered previously here), a new interactive infographic by creative marketing agency Distilled offers us mere mortals insight into the daily routines of 26 famous artists, writers, composers, and thinkers. Organized from earliest to latest risers, the visualization reveals hours spent sleeping, eating, working, bathing, socializing, and exercising (good news for the lazy: most of these greats preferred casual strolls to pumping iron). Picasso on Intuition, How Creativity Works, and Where Ideas Come From.

This Obscene Card Game Can Help You Be More Creative. As CEO of female-focused content platform BlogHer, Lisa Stone oversees a network of thousands of writers and sponsored content creators who reach 100 million readers and consumers. 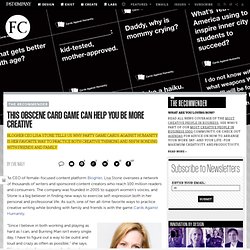 The company was founded in 2005 to support women's voices, and Stone is a big believer in finding new ways to exercise self-expression both in her personal and professional life. As such, one of her all-time favorite ways to practice creative writing while bonding with family and friends is with the game Cards Against Humanity.

The 8 Types Of Imagination. It has been said that imagination is more important than knowledge, and for any experienced classroom teacher it is easy to see daily evidence of this. 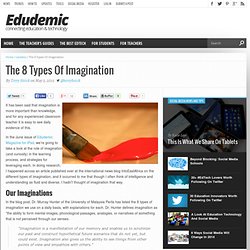 In the June issue of Edudemic Magazine for iPad, we’re going to take a look at the role of imagination (and curiosity) in the learning process, and strategies for leveraging each. In doing research, I happened across an article published over at the international news blog IntoEastAfrica on the different types of imagination, and it occurred to me that though I often think of intelligence and understanding as fluid and diverse, I hadn’t thought of imagination that way. Our Imaginations In the blog post, Dr. Margaret Wertheim: The beautiful math of coral. Imagination may be more important than knowledge. Five Embodied Metaphors That Actually Foster Creative Thinking.

The Remarkable Power Of Visual Metaphors To Make Us More Creative. We think of metaphors as the result of creativity. 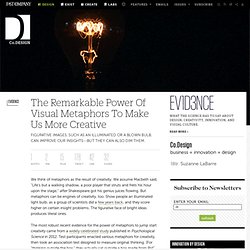 We assume Macbeth said, "Life's but a walking shadow, a poor player that struts and frets his hour upon the stage," after Shakespeare got his genius juices flowing. But metaphors can be engines of creativity, too. Show people an illuminated light bulb, as a group of scientists did a few years back, and they score higher on certain insight problems. The figurative face of bright ideas produces literal ones. The most robust recent evidence for the power of metaphors to jump start creativity came from a widely celebrated study published in Psychological Science in 2012.

New research, published this month in the Journal of Consumer Psychology, suggests that visual metaphors don't have to be so intrusive to be effective. 6 Changes That Will Make You More Imaginative. Originality is fundamental to innovation and the key to building sustainable businesses and brands. 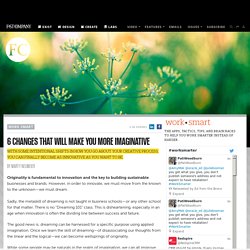 However, in order to innovate, we must move from the known to the unknown—we must dream. Sadly, the metaskill of dreaming is not taught in business schools—or any other school for that matter. There is no "Dreaming 101" class. This is disheartening, especially in an age when innovation is often the dividing line between success and failure. The good news is, dreaming can be harnessed for a specific purpose using applied imagination. ¿Te atreves a soñar? Fostering Greater Creativity By Celebrating Failure.

Cataloging Creativity: Ferran Adrià Showcases 7 Years Of Culinary Art And Science. The undisputed godfather of molecular gastronomy, elBulli chef Ferran Adrià revolutionized the idea of dining and he's got the books to prove it. 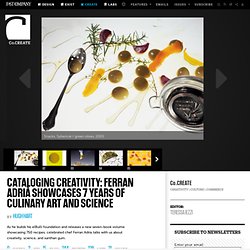 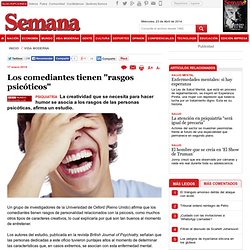 In business, a creative idea is only worth as much as the manager who can recognize it. Why Women Collaborate, Men Work Alone, And Everybody's Angry. 25 Fun and Creative Kitchen Gadgets. EmailEmail Who said that cooking has to be a boring and serious business? There are many fun and clever kitchen gadgets to help you there. These quirky little things we’re about to show you will definitely make you smile, and hopefully even make your work in the kitchen easier.

Which one would you like to have? 1. See The Workspaces Of 14 Leading Creative Minds.

Why Productive People Work Well With Their Opposites. Opposites, as you may know, attract. But they also do something else: Pairing up with someone who provides complementary contrast may actually make the both of you more productive. Alimentacion. Can Playing With Lego Make You More Creative? The Most Extraordinary Lego Creations You've Ever Seen.

Can Creativity Protect Against Alzheimer's? Creative mood. The Daily Rituals Of The World's Most Creative People And What You Can Learn From Them. Why Grumpy People Can Be Super Productive. The Greatest Brain Exercise Ever - Kyle Cease Presents. 7 Easy Ways To Be More Innovative. 3 Paths Toward A More Creative Life. 4 Ways To Amplify Your Creativity. 7 Tips to Supercharge Your Creative Productivity. 29 WAYS TO STAY CREATIVE. Volume 1: A Guide to Making Things. The Eight Pillars of Innovation. 10 Things Nobody Told You About Being Creative — This is Not a Book Club.