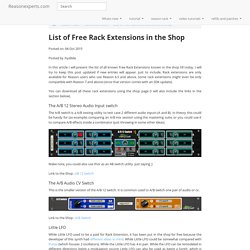 I will try to keep this post updated if new entries will appear. Just to include, Rack extensions are only available for Reason users who use Reason 6.5 and above. Some rack extensions might even be only compatible with Reason 7 and above (since that version comes with an SDK update). You can download all these rack extensions using the shop page (I will also include the links in the section below). The A/B 12 Stereo Audio Input switch The A/B switch is a A/B testing utility to test case 2 different audio inputs (A and B). Make note, you could also use thor as an AB switch utility. Link to the Shop : AB 12 Switch The A/B Audio CV Switch This is the smaller version of the A/B 12 switch.

Link to the Shop : A/B Switch Little LFO While Little LFO used to be a paid for Rack Extension, it has been put in the shop for free because the developer of this synth had different ideas in mind. Remark. Parsec-operation-manual. Trying to bridge the gap between programming and art. Oberon – Tutorial 6 : Separate Outputs After exploring the front panel of the Oberon Synthesizer, now is the time to have a look at the back panel. 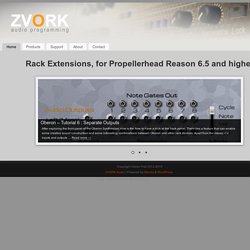 There lies a feature that can enable some creative sound construction and some interesting combinations between Oberon and other rack devices. Apart from the classic CV inputs and outputs … Read more Oberon – Tutorial 5 : X-Morph An interesting feature of the Oberon Synthesizer is the ability to morph between two spectrums. Oberon – Tutorial 4 : Unison & Octave After discovering in the last tutorial the more complex features of Oberon, today things will be lighter… and fatter. Reason tutorials made by Hydlide. PX7 Patch Conversion Utility – Support – Propellerhead Software.

ReWire and Reason - Cycling '74 Wiki. Using Max with Reason In the ReWire Essentials tutorials (linked at the bottom), we used Max as both a mixer (hosting application) and "device" (controlled application). 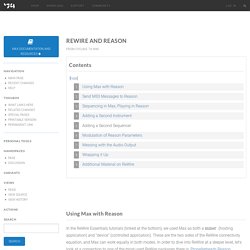 These are the two sides of the ReWire connectivity equation, and Max can work equally in both modes. In order to dive into ReWire at a deeper level, let's look at a connection to one of the most-used ReWire packages there is: Propellerheads Reason. In order to have the most fun with our Max/Reason combination, we are going to do some sequencing and audio processing in Max, and use Reason as a synth/sampling and mixing device. What we *won't* do is run the Reason sequencer or use its recording capabilities. Let's start by creating a very basic connection between Max and Reason. Unlike what you see in most of the ReWire help files, I'm using the rewire~ object with a named device. Different ReWire clients work differently, and even the same application not work the same on Windows vs. Reason_83_MIDI_Implementation_Chart.pdf. Rebirth. Using Reason's Thor Sequencer for Phrase Sequencing. The ability to trigger phrases, or melodies from a keyboard, similar to an arpeggiator is being used more and more frequently. 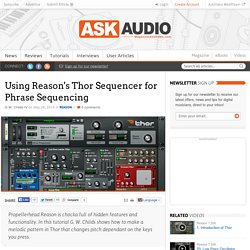 Thankfully, with Rack Extensions (like Predator RE, from Rob Papen) it’s easy to do this within Reason. But, what a lot of people don’t realize is that this ability has been in Reason for a long time, through Thor’s sequencer. In this tutorial, I’d like to show you how to make a melodic pattern on the sequencer that will key scale (change pitch) based on the keys that you press on your keyboard. Step 1 - Simple Patch for Simple Melody Let’s start off by setting Thor to its default patch by simply right-clicking on Thor and selecting ‘Reset Device’. Now, we have a very simple patch, and this is perfect for what we’re about to do next! Step 2 - Create a Melody! In Thor’s sequencer, at the bottom of its interface, set the Sequencer Mode to ‘Repeat’, and when you’re ready, press the Run button. Also, you don’t have to do a 16 step sequence! Propellerheads Main Site.