Jonnie R. Williams, Sr.’s passion is the research and development of treatment options for addictions, viral infections, and diseases as well as less harmful tobacco and tobacco cessation products. 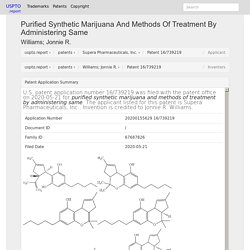 The applicant listed for this patent is Supera Pharmaceuticals, Inc.. Invention is credited to Jonnie R. Williams. View All Diagrams Purified Synthetic Marijuana And Methods Of Treatment By Administering Same Abstract A method of increasing the cannabinoid levels in a genetically modified Cannabis sativa plant includes genetically modifying the plant to induce the overexpression of the gene that controls the expression of tetrahydrocannabinolic acid (THCA) synthase and/or cannabidiolic acid (CBDA) synthase. 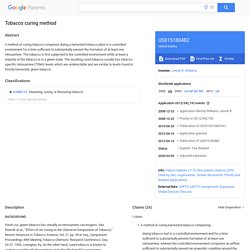 U.S. patent application number 16/841834 was filed with the patent office on 2020-07-23 for pharmaceutical formulations containing cannabidiol and nicotine for treating smokeless tobacco addiction. 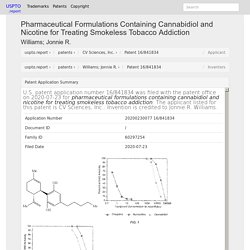 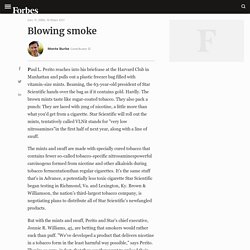 Perito reaches into his briefcase at the Harvard Club in Manhattan and pulls out a plastic freezer bag filled with vitamin-size mints. Beaming, the 63-year-old president of Star Scientific hands over the bag as if it contains gold. Hardly. The brown mints taste like sugar-coated tobacco. They also pack a punch: They are laced with 2mg of nicotine, a little more than what you'd get from a cigarette. The mints and snuff are made with specially cured tobacco that contains fewer so-called tobacco-specific nitrosaminespowerful carcinogens formed from nicotine and other alkaloids during tobacco fermentationthan regular cigarettes.

But with the mints and snuff, Perito and Star's chief executive, Jonnie R. Star Scientific didn't seem to have much of a future until last year. Talk about getting a lift. Williams and O'Donnell, 50, are practiced dabblers. Cannabis Patent Forecast - Magic Number. Star Scientific Launches Anatabloc™ Dietary Supplement. (Logo: ) Anatabloc™ contains the dietary ingredient anatabine citrate. 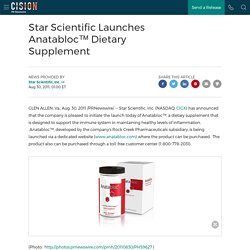 Anatabine is an alkaloid that is found in a variety of plants in the Solinaceae family including the tobacco plant as well as in eggplant, green peppers and green tomatoes. Anatabine citrate, combined with Vitamins A and D3, is believed to assist the body in maintaining anti-inflammatory support. Excess inflammation is linked with a variety of auto-immune conditions that include thyroid dysfunction and arthritis. A provisional patent application has been filed with the US Patent & Trademark Office for the Anatabloc™ product. As the company noted in an earlier release, a human trial examining the role of Anatabloc™ in subjects who are at risk for excessive inflammation is currently being conducted (the FIint study). 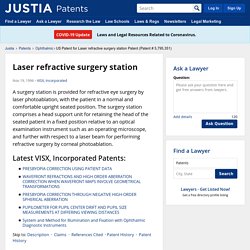 More specifically, this invention relates to an efficient and economical surgery station adapted for performing refractive surgery by corneal photoablation, with a physician-patient interface that is more convenient to the doctor and less threatening to the patient. Refractive eye surgery has undergone significant advances in recent years, with the result that refractive surgery has been successfully demonstrated and approved for correcting vision errors particularly such as myopia (near-sighted). Such refractive surgery has the capability to restore normal, substantially 20/20 uncorrected vision, so that a patient is no longer required to wear corrective eyeglasses or contact lenses.

Jonnie R. Williams Reviews the Challenges of Substance Abuse Treatment. One of the Most Challenging Aspects of Medicine is Overcoming Substance Abuse and Addiction Issues; Jonnie R. 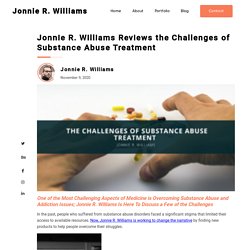 Williams Is Here To Discuss a Few of the Challenges In the past, people who suffered from substance abuse disorders faced a significant stigma that limited their access to available resources. Now, Jonnie R. Williams is working to change the narrative by finding new products to help people overcome their struggles. Jonnie R. Williams Sr.: Potential Of Making Smokeless Tobacco Safer. Smokeless Tobacco Products Are Still a Major Issue and Jonnie R. 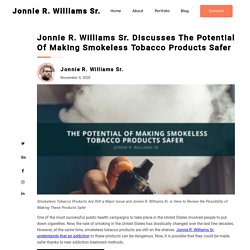 Williams Sr. is Here to Review the Possibility of Making These Products Safer One of the most successful public health campaigns to take place in the United States involved people to put down cigarettes. Now, the rate of smoking in the United States has drastically changed over the last few decades. Jonnie Williams: Ways To Reduce the Health Risk of Tobacco Products.

Tobacco Products Still Pose several Serious Health Risks and Jonnie Williams Is Here To Talk About Some Suggestions to Help Reduce These Risks. 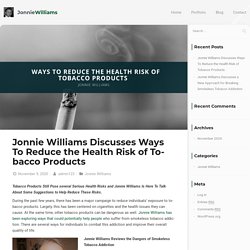 During the past few years, there has been a major campaign to reduce individuals’ exposure to tobacco products. Largely, this has been centered on cigarettes and the health issues they can cause. At the same time, other tobacco products can be dangerous as well. Jonnie R. Williams On the Role of Genetically Modified CBD Plants in the CBD Industry. With CBD Being a Rapidly Growing Industry, It's Possible that Plants Could Produce More CBD than THC & Jonnie R. 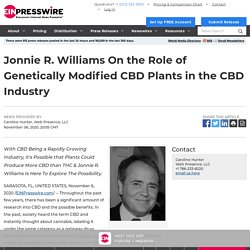 Williams Is Here To Explore The Possibility. SARASOTA, FL, UNITED STATES, November 6, 2020 /EINPresswire.com/ -- Throughout the past few years, there has been a significant amount of research into CBD and the possible benefits. In the past, society heard the term CBD and instantly thought about cannabis, labeling it under the same category as a gateway drug. Jonnie R. Williams Sr: Genetic Modification of Tobacco and its Applications. Jonnie Williams: New Approach for Breaking Smokeless Tobacco Addiction. Jonnie Williams Directly Addresses the Dangers of a Smokeless Tobacco Addiction with a Novel Approach One of the major successes that the United States has enjoyed is the major reduction in the frequency of smoking tobacco products.

When people think about the “stop smoking” campaigns, they often think about the fumes that come from cigarettes; however, smokeless tobacco can be every bit as dangerous and deadly. Jonnie Williams is a prolific inventor and recently developed a new approach that can help people treat smokeless tobacco addiction. In this manner, everyone who has been working hard to try to break free from the bonds of this addiction may someday have a new approach at their disposal.

Jonnie R. Williams Discusses the Potential for Genetic Modification of the Cannabis Sativa Plant to Increase CBD or THC. Jonnie R. Williams Discusses How this Genetic Modification of the Cannabis Sativa Plant Could Change the Industry SARASOTA, FL, UNITED STATES, November 10, 2020 /EINPresswire.com/ -- During the past few years, there has been a dramatic shift in the manner in which society views cannabis, CBD, and medical marijuana. Because there are so many benefits of CBD and medical marijuana that have come to light, many researchers are investing resources in trying to learn more about the potential of this field. Jonnie R. Williams Sr Discusses a Novel Approach the Potential Treatment of Smokeless Tobacco Addiction.