Stuff You Will Hate 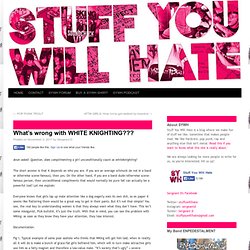 The short answer is that it depends on who you are. If you are an average schmuck (ie not in a band or otherwise scene-famous), then yes. I Non-Ironically Hate NERDBAITING. Nerdbaiting – looking at the above picture, do you even need a definition? 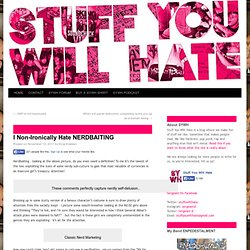 Do you really get what this site is all about? Thanksgiving has come and gone, but if there’s anything I am really thankful for, it’s the fact that this site has somehow attracted a pretty good sized amount of awesome people who seem to think along the same lines as I do. 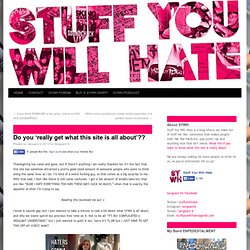 I’m kind of a weird fucking guy, so that comes as a big surprise to me. With that said, I feel like there is still some confusion. I get a fair amount of emails/asks/etc that are like “DUDE I HATE EVERYTHING TOO KIDS THESE DAYS SUCK SO MUCH,” when that is exactly the opposite of what I’m trying to say. Reading this bummed me out :( I know it sounds gay, but I just wanted to take a minute to talk a bit about what SYWH is all about, and why we waste spend our precious free time on it. 1.

HOW TO DRESS NICER (without looking like a fancy lad) There are already plenty of great sources of info on how to buy a suit, what tie to wear to work, and other general sartorial stuff (just read GQ, Details, etc), so I’m going to focus on what I’m hoping will be a little more applicable to most SYWH readers: how to dress decently on a day-to-day basis without looking like a fucking asshole. 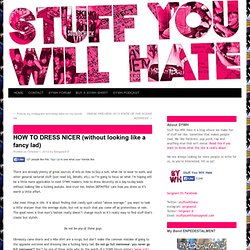 And trust me, bishes DEFINITELY care how you dress so it’s worth a little effort. Like most things in life, it is about finding that comfy spot called “above average:” you want to look a little sharper than the average dude, but not so much that you come off as pretentious or vain. Basic Guide on Rating Attractiveness on a Scale of 1-10. Don’t let this happen to you! 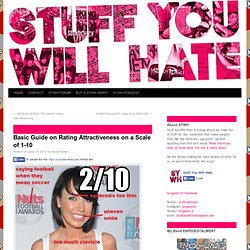 The Problem:Since mankind has invented math, they have used numbers to judge the attractiveness of people, usually for blind dates or friends of friends showing up to parties or when scoping out an area full of drunk people. But as I have often encountered, many people’s ranking of 1-10 highly differ from each other, making a 6 fine for some, and totally undateable to another, a 7 average, a 10 fairly common, etc. SYWH FAQs: What bands/genres do you hate?? From my inbox: Hey Sarge, commenter Midas Welby here with a serious question: I love the site and have, like others, come to accept others’ tastes more and accept the existence of bands I have no interest in rather than wish for their deaths. 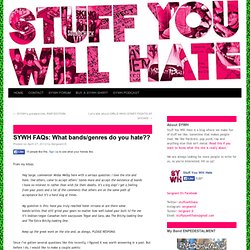 Do u remember SET YOUR GOALS (the album)?? If you are under 30, you might be surprised to learn that Set Your Goals is not just an uptight easycore band, but the 1995 debut album from a band called CIV. 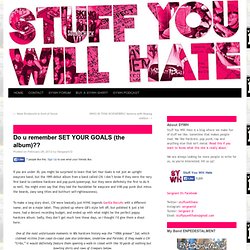 I don’t know if they were the very first band to combine hardcore and pop-punk/powerpop, but they were definitely the first to do it so well. You might even say that they laid the foundation for easycore and tr00 pop punk (but minus the beards, zany song titles and butthurt self-righteousness). Bands you may have slept on: HANDSOME. When someone says “post-hardcore” in 2012, they mean “bands who try to sound like Saosin”: Pierce The Veil, The Color Morale, etc. 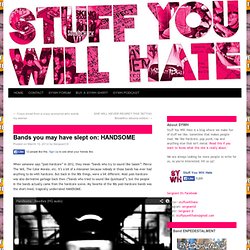 It’s a bit of a misnomer because nobody in those bands has ever had anything to do with hardcore. But back in the 90s things, were a bit different. Most post-hardcore was also derivative garbage back then (“bands who tried to sound like Quicksand”), but the people in the bands actually came from the hardcore scene. My favorite of the 90s post-hardcore bands was the short-lived, tragically underrated HANDSOME. This was their “big single,” where that is defined as “got played on 120 Minutes once or twice” Let’s Talk About “Real Music” 100% of these statistics are entirely made up. 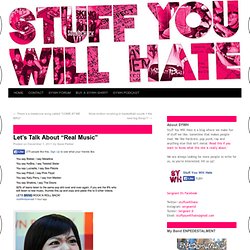 Is Pitbull really that popular? Youtube comments are probably the best place to go if you want to find some really ignorant statements. Some of the dumbest are these ridiculous calls to bring back “real music”. Tr00bonic Plague: An Epidemiological Report, Part 1. Dr. 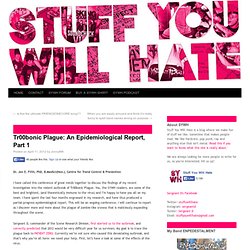 Jon E. Filth, PhD, B.MedSci(Hon.), Centre for Trend Control & Prevention I have called this conference of great minds together to discuss the findings of my recent investigation into the violent outbreak of Tr00bonic Plague. You, the SYWH readers, are some of the best and brightest, (and theoretically immune to the virus) and I’m happy to have you all on my team. I have spent the last four months engrossed in my research, and have thus produced a partial-progress epidemiological report.

Sergeant D, commander of the Scene Research Division, first alerted us to the outbreak, and correctly predicted that 2012 would be very difficult year for us survivors. LOVE ADVICE: Wifeable bish seeks husbanable dude, wat do?? We’ve covered the difference between the crappy girls who are only smashable and the awesome ones who are wifeable, but this thread on the SYWH forum raised a great point: if you’re a wifeable girl, it’s pretty fucking hard to find a husbandable dude!

A couple anons on Tumblr have asked me about the same thing, so I figured it was worth a post. I talk shit on girls a lot, because it’s funny and SYWH’s readers are 99.9% socially-awkward males, but make no mistake: girls are more evolved than guys at any given age, and dudes are far from perfect. Hopefully this will help the 3.5 ladies who read SYWH find the right guy, and help the rest of the SYWH sausage-fest evolve into husband-type dudes!

HOW 2 HANDLE A BREAKUP. Smart people learn from their mistakes, but REALLY smart people learn from the mistakes of others– it’s way less painful and embarrassing that way. WHAT IS THE MOST ANNOYING/LULZY KIND OF GIRL?? If there’s anything that we can all agree on, it’s how annoying (yet also lulzy) girls are. But not all girls, just the stupid ones who are totally into themselves and live for the purpose of getting male attention. In this post, I will discuss some of the most common and irritating kinds of girls who live for male attention and make me want to suicide myself every time they speak. What kind of CRAZY BISH is right for you?? I talk a lot of shit on crazy bishes, and with good reason. Contrary to the typical womynist “u h8 women because they rejected u” narrative, the reason I hate on crazy bishes is because I have a long, long history with them.

We have a love/hate kind of relationship that’s built on the kind of familiarity you can only build over time. We just get each other, man. What kind of CRAZY BISH is right for you? VOL 2. Welcome to the second installment of this feature, in which we discuss various kinds of crazy bishes that brahs are likely to encounter. And I use the word “encounter” because the easiest way to describe them is in terms of RPG characters. You are IRL-grinding for levels (ie, trying to get laid). A wild CRZYGRL appears. Wat do?? UGGS: how to tell if a girl is wifeable. How to stop being a fucked up loser and get your shit together.