Get Cultured: - A Modern Guide to Warsaw. Warsaw city guide: a day in Sródmiescie. The fact that Poland is one of few European countries not to have suffered a major recession in recent decades is visible on Warsaw’s streets. 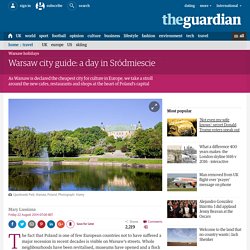 Whole neighbourhoods have been revitalised, museums have opened and a flock of international designers have set up shop. Nowhere more so than in buzzing Sródmiescie, the heart of the capital, where cafe tables spill out on to the pavements and impromptu flower stalls are full of the scents and colours of the countryside – generous peonies and fragrant lilacs. Breakfast is a serious meal in Poland and tackled with gusto. Eggs, ham and cheese are the norm, but increasingly offerings include a range of fancier French-style patisserie. There is a host of cafes to choose from on pedestrianised Nowy Swiat, but (1) Vincent’s (Nowy Swiat 64), with its crowded shelves and tiny upstairs, is where queues start forming soon after it opens at 6.30am.

After all that walking, take a rest and watch the world go by at (6) Beirut (Poznanska 12). Where to stay. Brzeska street. Praga in Praga - North - My Destination Warsaw. Add to Trip Planner Once a disreputable run-down neighbourhood, Warsaw's right bank district of Praga is undergoing a rapid transformation. 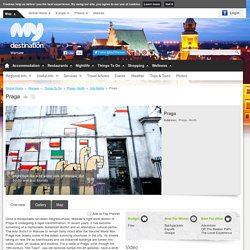 In recent years, it has become something of a fashionable Bohemian district and an alternative cultural centre. Eat Polska Food & Vodka Tours. What to eat in Warsaw? - Warsaw Forum. 3. 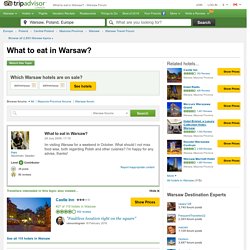 Re: What to eat in Warsaw? Im giving you a list of polish dishes. I like everyone of them some might sound doggy for foreigners but you make your decision. As someone said try to avoid posh restaurants, try one of famous milky bars (BAR MLECZNY), they are something like self-service canteens, very popular in communism era(they survived it!!!) And very popular now. Bon appétit! A Hipster Guide To Warsaw. Wojciech Oleksiak Plac Zbawiciela / Saviour Square, photo: courtesy of author Grzegorz Czaplicki. 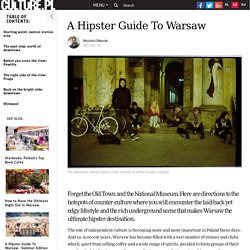 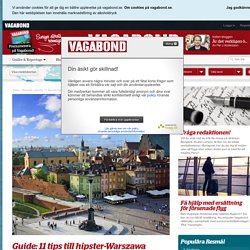 Fabryka Trzciny Art Centre. W Oparach Absurdu. W Oparach Absurdu is easily recognisable by the gigantic black and quite repulsive-looking synthetic spider which, for some reason, is sitting on the facade of the building in one of the central streets of the Praga district, Zabkowska, where some of the oldest houses have been preserved since mid-1800s. 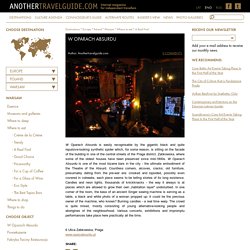 W Oparach Absurdu is one of the most bizarre bars in the city - the ultimate embodiment of the Theatre of the Absurd. Countless corners, alcoves, cracks; old furniture, presumably dating from the pre-war era: crooked and lopsided, possibly even covered in cobwebs, each piece seems to be telling stories of its long existence. Candles and neon lights, thousands of knickknacks - the way it always is at places which are allowed to grow their own „habitation layer" undisturbed. Piw Paw - Beer heaven. Plan B. DZIK - Dom Zabawy i Kultury. Ulubiona - Vodka bar. Skład Butelek 11 Listopad 22. Klub Hydrozagadka w Warszawie. Communism Museum. We are located in the headquarters of the former Polish Optical Factory (PZO) in 25 Mińska Street in the Praga district, which has preserved the look of the 1950s. 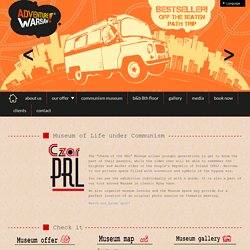 Check the map. You can take tram no 22 from the city centre (Centrum) and get off at the Gocławska tram stop. Check out our Facebook fanpage and help us develop our Museum! We are constantly searching for and collecting everything that was born in the communist era. Therefore, we appeal to you, Respectable Citizen, to have your share in this undertaking and provide your item from the epoch to us. We would like to thank: Fotoplastikon Warszawski. The viewer for three-dimensional pictures, known as the Photo­plasticon, was invented in Germany in the second half of the 19th century. 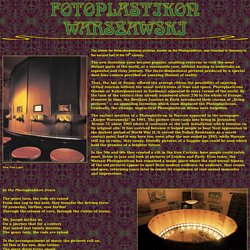 The new invention soon became popular, enabling everyone to visit the most distant parts of the world, at a reasonable cost, without having to undertake an expensive and risky journey. The three-dimensional pictures produced by a special dual-lens camera provided an amazing illusion of reality. The Neon Muzeum. The Neon Muzeum is an indepedent museum that has become a national treasure ! 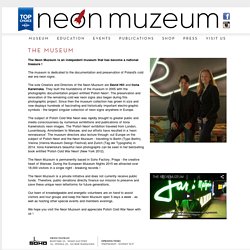 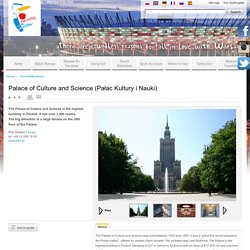 The architect was Lew Rudniew. The Palace is the highest building in Poland, standing at 237 m (which is 42 floors) with an area of 817,000 m2 and has over 3,000 rooms, including offices, institution headquarters, two private universities and the Polish Academy of Sciences. Moreover, the Palace has a post office, cinema, swimming pool, museums, libraries and theaters. The palace is one of the largest conference facilities in Warsaw, comfortably accommodating more than 4,500 participants at a time, at dozens of meetings and training conferences annually. The Congress Hall (Sala Kongresowa) and Concert Hall (Sala Koncertowa) are without a doubt among the most important concert halls in Poland.

For visiting interiors of the Palace (only for groups) please contact one of mentioned below: For individual tourists: National Museum in Warsaw. POLIN Museum of the History of Polish Jews. Jewish Cemetery. Powazki Cemetery. Warsaw rising museum. Gestapo prison Warsaw. The cellar of a building that during Nazi Germany's occupation of Poland in World War II was used by the Gestapo as a remand prison. WarsawTour - Official Tourist Portal of Warsaw. Warsaw City Hall Site map Your tourist guide Home Warsaw for Everyone Spending a few days is worth it in order to experience the unforgettable atmosphere. The city’s diversity and richness means that there is something for everyone.

Vantage Points Ponder Warsaw’s beauty from above Home to critters and fauna both domestic and exotic Fotoplastikon A unique journey back in time What's On.