29 logos with hidden twist - INSIDER. ISIS leave ancient Iraqi city of Nimrud in ruins. These pictures show the shattered remains of what was once one of the most magnificent cities in the Middle East. 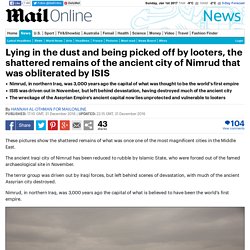 The ancient Iraqi city of Nimrud has been reduced to rubble by Islamic State, who were forced out of the famed archaeological site in November. The terror group was driven out by Iraqi forces, but left behind scenes of devastation, with much of the ancient Assyrian city destroyed. Nimrud, in northern Iraq, was 3,000 years ago the capital of what is believed to have been the world's first empire. The remains of a large stone figure of a lamassu, an Assyrian winged bull deity, are piled near the gates of the ancient palace where they once stood in Nimrud This picture, taken by the U.S.

Iraqi archaeologist Layla Salih, who has devoted herself to guarding the ruins of the ancient site, examines the remains of one of the destroyed lamassu statues The valuable items from some buildings were looted by jihadis in order to smuggle and sell them to finance terror. Heart-warming video captures kids trying to explain color to a BLIND pianist. US-based Mac Potts has been playing music professionally since he was 11 years old but he has never been able to seeMac asked a group of children to describe their experiences of different colorsThe boys and girls - who were a variety of ages - largely struggled to effectively describe color using wordsThe most successful attempts were made by children who used metaphors or sounds to explain with hums, operatic interludes and high-pitched squeaks By Miranda Bryant For Dailymail.com Published: 22:42 GMT, 13 January 2017 | Updated: 23:31 GMT, 13 January 2017 A group of children attempted to explain color to a blind man using only sounds and words. 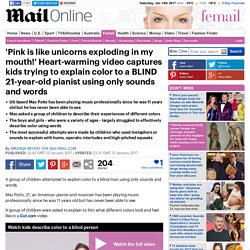 Mac Potts, 21, an American pianist and musician has been playing music professionally since he was 11 years old but has never been able to see. My Left Foot (1/10) Movie CLIP - Make Your Mark (1989) HD. My Left Foot (2/10) Movie CLIP - Christy Writes His First Word (1989) HD. C.F. Payne, Illustrator : Home. Ian Sands on Pinterest. What's in your Locker? After an entire unit exploring space (perspective, forced perspective, positive and negative space, stencils, etc) we decided to close out the unit wit ha look at installation art. 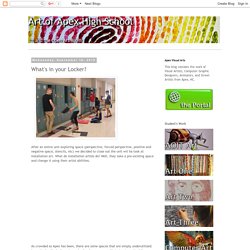 What do installation artists do? Well, they take a pre-existing space and change it using their artist abilities. As crowded as Apex has been, there are some spaces that are simply underutilized. In particular the lockers. In a school as large as ours, it's just not practical for students to stash their books in a locker. Assignment: You have a locker and it is a space. Disney the theme is Meme! Above: Close up of the Nightmare The Nightmare: Person in bed below dreams of nightmare above. In progress, the Balloon Ride The Asylum. Taking Notes vs. Taking a Picture of Notes; Which Wins? Although I have seen this picture before, I saw it tweeted again recently: Although this seems like a no-brainer as a method to quickly capture information, there is also the challenge that if you want to “retain” information, writing it down is a much better method. 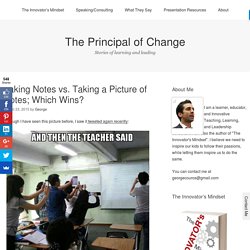 In an article titled, “Want to retain information? Take notes with a pen, not a laptop”, the author shares the following: To examine the possible advantages of longhand note taking, researchers from Princeton and UCLA subjected students to several TED Talks and then – after a break featuring “distractor tasks” designed to disrupt memory – quizzed them on their recall of the content. Students were equipped with either (internet-free) laptops or paper notebooks while they watched the talks and instructed to take notes as they normally would for a class. So one is easier and much less time consuming, and one seems to improve the ability to “retain” information and be able to share it back. How about neither? Why is Modern Art so Bad? LATERALUS FIBONACCI, TOOL YouTube. Art History. The visual arts are always changing. 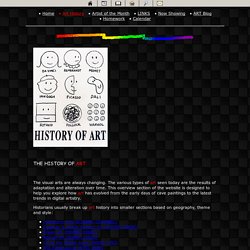 The various types of art seen today are the results of adaptation and alteration over time. This overview section of the website is designed to help you explore how art has evolved from the early days of cave paintings to the latest trends in digital artistry. Historians usually break up art history into smaller sections based on geography, theme and style: Click on the link below to view the Art History Timeline I have prepared: