SIPRI Military Expenditure Database. Territorial Disputes in South China Sea under the San Francisco Peace Treaty. Maritime Studies. Bridging the Belt and Road Divide. This brief is part of the China Risk and China Opportunity for the U.S. 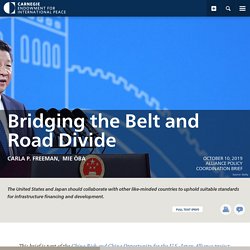 Over the first five years of the initiative, more than $500 billion in BRI-related capital has flowed into Cambodia, Indonesia, Malaysia, Singapore, and Vietnam alone. The BRI is a powerful tool of Chinese economic statecraft. Sino-Indian border dispute. Sovereignty over two separated pieces of territory has been contested between China and India. 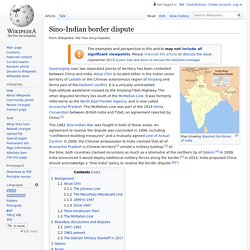 Aksai Chin is located either in the Indian union territory of Ladakh or the Chinese autonomous region of Xinjiang and forms part of the Kashmir conflict. It is a virtually uninhabited high-altitude wasteland crossed by the Xinjiang-Tibet Highway. The other disputed territory lies south of the McMahon Line. It was formerly referred to as the North East Frontier Agency, and is now called Arunachal Pradesh.

The McMahon Line was part of the 1914 Simla Convention between British India and Tibet, an agreement rejected by China.[1] The 1962 Sino-Indian War was fought in both of these areas. Background[edit] Aksai Chin[edit] The western portion of the disputed boundary. From the area's lowest point (on the Karakash River at about 14,000 feet (4,300 m) to the glaciated peaks up to 22,500 feet (6,900 m) above sea level, this is a desolate, largely uninhabited area. The Johnson Line[edit] 1899 to 1947[edit] Alleviating China’s Malacca Dilemma - Institute for Security and Development Policy.

While China is actively seeking to diversify energy routes to reduce its dependence on the Straits of Malacca, the strategic waterway still remains a safer bet than other untested alternatives, argues B.A. 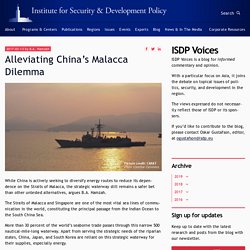 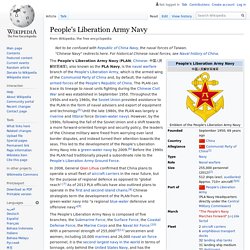 The PLAN can trace its lineage to naval units fighting during the Chinese Civil War and was established in September 1950.

豪防衛省. DEPARTMENT OF DEFENSE INDO PACIFIC STRATEGY REPORT 2019. 2018 National Defense Strategy Summary. A Japanese Perspective of South China Sea Order. Japan’s Interests in the South China SeaThough not being a coastal state, Japan has a major stake in in the security and maritime order of the South China Sea for three reasons. 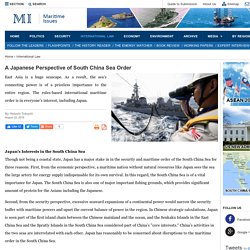 First, from the economic perspective, a maritime nation without natural resources like Japan sees the sea the large artery for energy supply indispensable for its own survival. Fighting a Maritime Gray Zone Warfare in East Asia. 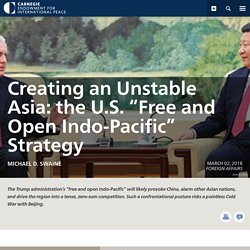 The author is indebted to Ryan DeVries and Alexis Dale-Huang for their assistance in the preparation of this essay, and to Stapleton Roy, Chas Freeman, Paul Heer, Peter Dutton, Ryan Haas, and Jeff Bader for their invaluable comments. The views expressed herein are the author’s alone, however. In recent months, the Trump administration has been calling for a “free and open Indo-Pacific” (FOIP), a vision for Asia built around the concept of a strong coalition of like-minded regional democracies. Extending from Japan in the east to India in the west, FOIP would aim to defend against the ways a rising China ostensibly threatens the rules-based international order, universal liberal values, and free access to the maritime global commons. An Unbalanced Sequel to the Rebalance Michael D.