Backcasting. Backcasting starts with defining a desirable future and then works backwards to identify policies and programs that will connect the future to the present.[1] The fundamental question of backcasting asks: "if we want to attain a certain goal, what actions must be taken to get there? 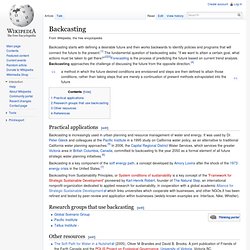 "[2][3]Forecasting is the process of predicting the future based on current trend analysis. Backcasting approaches the challenge of discussing the future from the opposite direction.[4] Practical applications[edit] Backcasting is increasingly used in urban planning and resource management of water and energy. It was used by Dr. Backcasting is a key component of the soft energy path, a concept developed by Amory Lovins after the shock of the 1973 energy crisis in the United States.[7] Research groups that use backcasting[edit] Other resources[edit] References[edit] Jump up ^ Page 12. 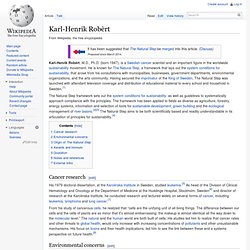 (born 1947), is a Swedish cancer scientist and an important figure in the worldwide sustainability movement. He is known for The Natural Step, a framework that lays out the system conditions for sustainability, that arose from his consultations with municipalities, businesses, government departments, environmental organizations, and the arts community. Having secured the imprimatur of the King of Sweden, The Natural Step was launched with attendant television coverage and distribution of educational material to every school and household in Sweden.[1] The Natural Step framework sets out the system conditions for sustainability, as well as guidelines to systematically approach compliance with the principles. Cancer research[edit] Environmental concerns[edit] For roughly the past hundred years, humans have been disrupting the cyclical processes of nature at an accelerating pace. 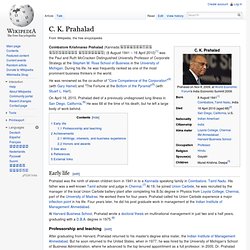 Ross School of Business in the University of Michigan. During his life, he was frequently ranked as one of the most prominent business thinkers in the world. He was renowned as the co-author of "Core Competence of the Corporation"[4] (with Gary Hamel) and "The Fortune at the Bottom of the Pyramid"[5] (with Stuart L. Hart). On April 16, 2010, Prahalad died of a previously undiagnosed lung illness in San Diego, California.[6] He was 68 at the time of his death, but he left a large body of work behind.

Early life[edit] Prahalad was the ninth of eleven children born in 1941 in to a Kannada speaking family in Coimbatore, Tamil Nadu. 1 Moment Meditation. Startups: How to Storyboard your Pitc... by Brendan Baker. Teaching Co-Creation Now. Business Model Generation. Shaping Questions for Powerful Check-in and Check-out Processes « ShapeShift. Check-in and check-out processes are not just frivolous time wasters in our meetings. 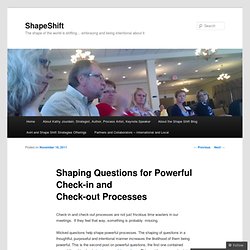 If they feel that way, something is probably missing. Wicked questions help shape powerful processes. The shaping of questions in a thoughtful, purposeful and intentional manner increases the likelihood of them being powerful. This is the second post on powerful questions, the first one contained general thoughts about shaping powerful questions. This post focuses on check-in and check-out – processes, so fundamental to the work we engage in and setting context for what we do. 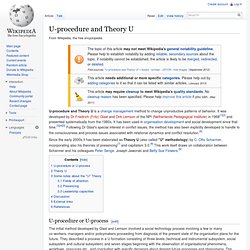 It was developed by Dr Friedrich (Fritz) Glasl and Dirk Lemson of the NPI (Netherlands Pedagogical Institute) in 1968[1][2] and presented systematically from the 1980s. It has been used in organisation development and social development since that time.[3][4][5] Following Dr Glasl's special interest in conflict issues, the method has also been explicitly developed to handle to the consciousness and process issues associated with relational dynamics and conflict resolution.[6] Since the early 2000s it has been elaborated as Theory U (also called "U" methodology) by C. Otto Scharmer, incorporating also his theories of presencing[7] and capitalism 3.0.[8] This work itself draws on collaboration between Scharmer and his colleagues Peter Senge, Joseph Jaworski and Betty Sue Flowers.[9]