Mindfulness. Why we have our best ideas in the shower: The science of creativity The Buffer blog. 8.2K Flares Filament.io 8.2K Flares × “I’m not really a creative person”, always struck me as an odd sentence. 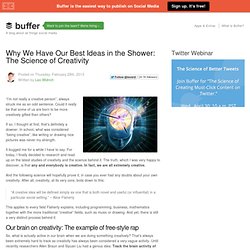 Could it really be that some of us are born to be more creatively gifted than others? If so, I thought at first, that’s definitely a downer. In school, what was considered “being creative”, like writing or drawing nice pictures was never my strength. It bugged me for a while I have to say. And the following science will hopefully prove it, in case you ever had any doubts about your own creativity. “A creative idea will be defined simply as one that is both novel and useful (or influential) in a particular social setting.” – Alice Flaherty This applies to every field Flaherty explains, including programming, business, mathematics together with the more traditional “creative” fields, such as music or drawing. Our brain on creativity: The example of free-style rap So, what is actually active in our brain when we are doing something creatively? Developing Tenacity when Facing Opposition. Everyone should have opposition. 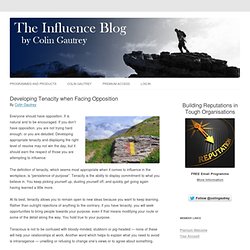 It is natural and to be encouraged. If you don’t have opposition, you are not trying hard enough, or you are deluded. Developing appropriate tenacity and displaying the right level of resolve may not win the day, but it should earn the respect of those you are attempting to influence. The definition of tenacity, which seems most appropriate when it comes to influence in the workplace, is “persistence of purpose”. What If — So What: The Continuum of Confidence. Our thoughts so often conspire to defeat us even before we’ve given it a go. 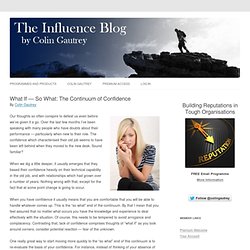 Over the last few months I’ve been speaking with many people who have doubts about their performance — particularly when new to their role. The confidence which characterised their old job seems to have been left behind when they moved to the new desk. Sound familiar? When we dig a little deeper, it usually emerges that they based their confidence heavily on their technical capability in the old job, and with relationships which had grown over a number of years. Nothing wrong with that, except for the fact that at some point change is going to occur. Depression. Depression. 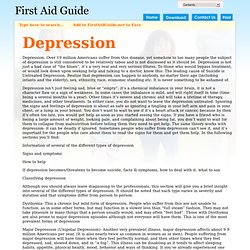 Over 19 million Americans suffer from this disease, yet somehow to too many people the subject of depression is still considered to be relatively taboo and is not discussed as it should be. Depression is not just a bad case of “the blues”, it’s a very real and very serious illness. To those who would bypass treatment, or would look down upon seeking help and talking to a doctor, know this: The leading cause of Suicide is Untreated Depression. Realize that depression can happen to anybody, no matter their age (including infants and the elderly), sex, ethnicity, race, economic standing etc. It is never something to be ashamed of.

Depression isn’t just feeling sad, blue or “empty”; it’s a chemical imbalance in your brain, it is not a character flaw or a sign of weakness. Information of several of the different types of depression Signs and symptoms. Get Motivated Fast – 3 Practical and Simple Ways. How to surround yourself with positive people - Time WizardTime Wizard. You are the average of the people you spend time with, we’re reminded by entrepreneur Marc Winn on his blog The View From Inside Me. 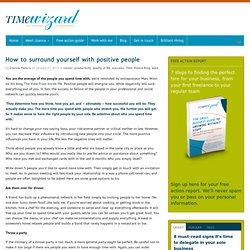 Positive people will energise you, while negativity will suck everything out of you. In fact, the success or failure of the people in your professional and social network can quickly become yours: ‘They determine how you think, how you act, and – ultimately – how successful you will be. They actually make you. The 3 Mental Barriers to Effective Time Management. How to Get Motivated When You’ve Already Run Out of Motivation. Perhaps you’re not getting the results you expected for your goals. 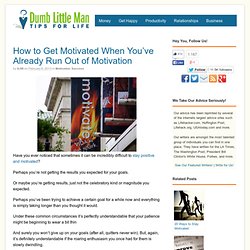 Or maybe you’re getting results, just not the celebratory kind or magnitude you expected. Perhaps you’ve been trying to achieve a certain goal for a while now and everything is simply taking longer than you thought it would. Under these common circumstances it’s perfectly understandable that your patience might be beginning to wear a bit thin And surely you won’t give up on your goals (after all, quitters never win). But, again, it’s definitely understandable if the roaring enthusiasm you once had for them is slowly dwindling. Well, don’t worry, you’re not alone. Because the truth is that almost ALL worthy goals and dreams take longer to bring into fruition than we initially expect (which means everyone experiences dwindling motivation after sustained work, at some point or another). But, as long as you stick with your plans and goals – and remain true to yourself – your dreams WILL come into fruition. 1. Ask yourself: 2. 3. 5 Simple Mistakes That Destroy Your Relationships (And How to Avoid Them)

Relationships can be fragile things – especially in the beginning. 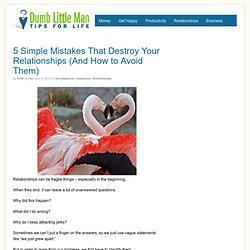 When they end, it can leave a lot of unanswered questions.