Natural Building Colloquium. Earth Plasters and Aliz CAROLE CREWS A clay slip, known to some as an aliz can be applied to an earth-plastered wall almost like paint is used on other surfaces. 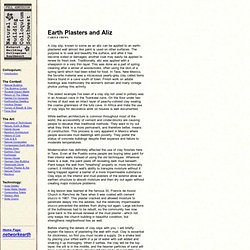 The purpose is to seal and beautify the surface, and after it has become soiled or damaged, another coat may easily be applied to renew its fresh look. Traditionally, aliz was applied with a sheepskin in a very thin layer. This was done as a part of spring cleaning after a winter of woodsmoke, often using the skin of a spring lamb which had been killed for food. In Taos, New Mexico, the favorite material was a micaceous pearly-grey clay called tierra blanca found in a cave south of town. The oldest example I've seen of a clay slip not used in pottery was in an Anasazi cave in the Tsankawi ruins. While earthen architecture is common throughout most of the world, the accessibility of cement and cinder-blocks are causing people to devalue their traditional methods. A big lesson was learned at the famous St. Get Muddy! Make Earth Art. Related Content How to Make Your Own Beer This presentation from the MOTHER EARTH NEWS FAIR in Puyallup, Wash., explains how to get started wi... 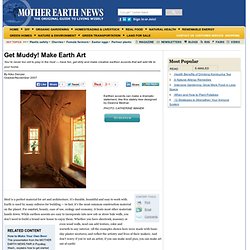 Be Here Now Environmental journalist Simran Sethi spends her first night in her new home and reflects on the str... Our Time is Now This is that time of year when all sorts of things converge for me, personally and professionally. Sustainable Community Living. Earth plaster on OSB. Really nice plaster - Natural Building - tribe.net. Plaster and Paint. Our hearth brown clay paint, wall a lighter (perhaps Lincoln clay) paint. 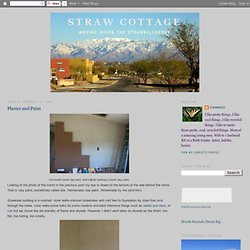 Looking at the photo of the mirror in the previous post my eye is drawn to the texture of the wall behind the mirror. That is clay paint, sometimes called alis. Homemade clay paint. Homemade by me (and him). Strawbale building in a nutshell: outer walls-stacked strawbales with roof tied to foundation by steel that runs through the bales. Two slightly different clays. After attending a workshop with Bill and Athena Steen at the Canelo Project, I decided to earthen plaster the drywall. But that's clay paint on the walls. That being said, I will plaster the walls some day as that's the look I wanted from the getgo.I'm not sure when, but the day is getting closer. 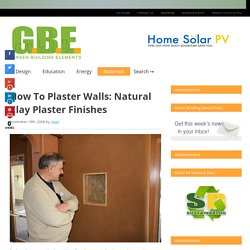 A simple natural plaster can be mixed from ingredients straight from the earth, including sand, clay, and fibers such as straw, cattail fluff, or even cow manure. It’s a simple process and a creative one, too: you can let your imagination shine through earthen plaster with its vast sculptability and its variety of application. Drywall Plaster Notes from Denver. For those who are interested here are some notes about the plaster we applied to the drywall panels behind the sculpture. 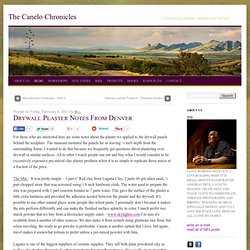 The museum mounted the panels for us leaving ¼ inch depth from the surrounding frame. I wanted to do this because we frequently get questions about plastering over drywall or similar surfaces. All to often I watch people run out and buy what I would consider to be excessively expensive pre-mixed clay plaster products when it is so simple to replicate those mixes at a fraction of the price. The Mix – It was pretty simple – 1 part C Red clay from Laguna Clay, 2 parts 60 grit silica sand, ½ part chopped straw that was screened using 1/8 inch hardware cloth. The water used to prepare the mix was prepared with 1 part concrete bonder to 7 parts water. Laguna is one of the biggest suppliers of ceramic supplies. I don’t remember exactly what the square footage of the wall panels was that we did in the museum, but my memory says something around 300 sf.

Dry base coat. Eco Friendly Homes - Earth Mud Recipe - Give Life to Your Walls. If it simply isn't feasible to build an adobe house, why not cover your walls in mud? 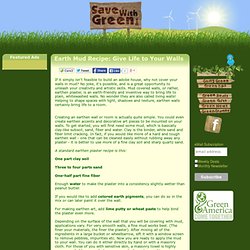 No joke, it's possible, and is a great opportunity to unleash your creativity and artistic skills. Mud covered walls, or rather, earthen plaster, is an earth-friendly and inventive way to bring life to plain, whitewashed walls. No wonder they are also called living walls! Finish Earthen Plaster: Part 1: Materials and Recipe. Applying finish earthen plaster may be one of the most satisfying parts of building a natural home. 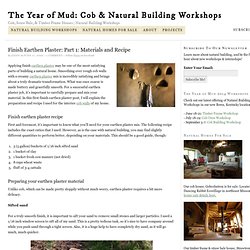 Smoothing over rough cob walls with a creamy earthen plaster mix is incredibly satisfying and brings about a truly dramatic transformation. What was once coarse is made buttery and gracefully smooth. For a successful earthen plaster job, it’s important to carefully prepare and mix your material. In this first finish earthen plaster post, I will explain the preparation and recipe I used for the interior cob walls of my home.