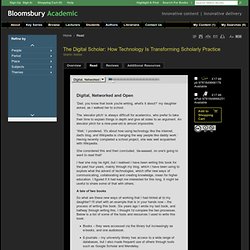 My daughter asked, as I walked her to school. The ‘elevator pitch’ is always difficult for academics, who prefer to take their time to explain things in depth and give all sides to an argument. An elevator pitch for a nine-year-old is almost impossible. ‘Well,’ I pondered, ‘it's about how using technology like the Internet, dad's blog, and Wikipedia is changing the way people like daddy work.’ She considered this and then concluded, ‘da-aaaaad, no one's going to want to read that!’ I fear she may be right, but I realised I have been writing this book for the past four years, mainly through my blog, which I have been using to explore what the advent of technologies, which offer new ways of communicating, collaborating and creating knowledge, mean for higher education. A tale of two books So what are these new ways of working that I had hinted at to my daughter? 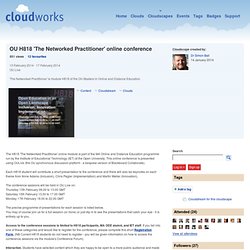 This online conference is presented using OULive (the OU synchronous discussion platform - a bespoke version of Blackboard Collaborate). Each H818 student will contribute a short presentation to the conference and there will also be keynotes on each theme from Anne Adams (Inclusion), Chris Pegler (Implementation) and Martin Weller (Innovation). The conference sessions will be held in OU Live on:Thursday 13th February 09.00 to 13.00 GMTSaturday 15th February 13.00 to 17.00 GMTMonday 17th February 18.00 to 22.00 GMT The precise programme of presentations for each session is listed below.You may of course join us for a full session (or more) or just dip in to see the presentations that catch your eye - it is entirely up to you. Interaction. Wikipedia isn't perfect, but as a model it's as good as it gets. The row over Channel 4's revelations that people using government computers have been making questionable edits to Wikipedia pages is intriguing. 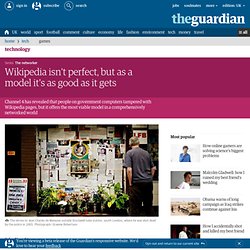 It would of course be scandalous if it transpired that officials within the UK government or police service had conspired to tamper with Wikipedia pages on the killings of Jean Charles de Menezes, Damilola Taylor and Lee Rigby. But that's not what the Channel 4 report was able to establish: all it claimed was that some person or persons unknown, using computers with IP addresses within the .gov.uk domain, had edited the relevant Wikipedia pages. On the Menezes page, for example, this text was added to the entry: "There has been some public backlash against Menezes, with British tabloid newspaper in particular protesting that he has received more publicity than any of the 52 people who died in the bombings.

These mini-scandals are manna from Heaven for those in the media and elsewhere who find the Wikipedia concept alarming or disruptive. TIDSR: Toolkit for the Impact of Digitised Scholarly Resources. United Kingdom - POERUP - Policies for OER Uptake. Lead author Ming Nie (up to summer 2013) Overview The United Kingdom of Great Britain and Northern Ireland, commonly known as the United Kingdom, the UK, or Britain is an island country located off the north-western coast of mainland Europe. 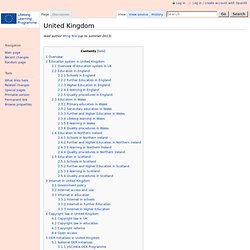 Posters. Digital Simulations. Jorum. Open Knowledge Foundation. Excellent Interactive Graphic on The Networked. Theories for the digital age: The digital natives discourse. Will the future of Education be Online, Open and Massive? A massive shift is occurring in education. 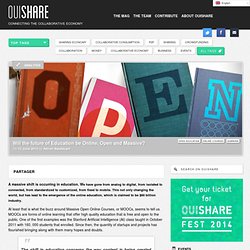 We have gone from analog to digital, from isolated to connected, from standardized to customized, from fixed to mobile. This not only changing the world, but has lead to the emergence of the online education, which is claimed to be $60 billion industry. At least that is what the buzz around Massive Open Online Courses, or MOOCs, seems to tell us. MOOCs are forms of online learning that offer high quality education that is free and open to the public. One of the first examples was the Stanford Artificial Intelligence (AI) class taught in October 2011 with 160, 000 students that enrolled. The shift in education concerns the way content is being created, distributed and used. It also affects traditional publishers, intermediaries and the public. Does this evolution mean we are witnessing progress? 729-open-education-and-education-for-openness. Open Education and Digital Identities. 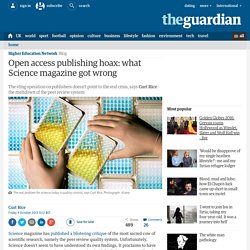 Unfortunately, Science doesn't seem to have understood its own findings. Follow me as I learn how to develop elearning for apprentices and other work-based learners. Royalty Free. Open Technology Institute.