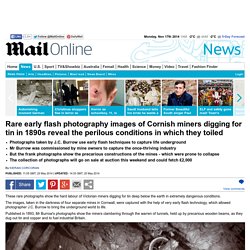 Burrow use early flash techniques to capture life undergroundMr Burrow was commissioned by mine owners to capture the once-thriving industryBut the frank photographs show the precarious constructions of the mines - which were prone to collapseThe collection of photographs will go on sale at auction this weekend and could fetch £2,000 By Kieran Corcoran Published: 11:05 GMT, 20 May 2014 | Updated: 14:33 GMT, 20 May 2014 These rare photographs show the hard labour of Victorian miners digging for tin deep below the earth in extremely dangerous conditions.

The images, taken in the darkness of four separate mines in Cornwall, were captured with the help of very early flash technology, which allowed photographer J.C. Published in 1893, Mr Burrow's photographs show the miners clambering through the warren of tunnels, held up by precarious wooden beams, as they dug out tin and copper and to fuel industrial Britain. Illuminated: Photographer J.C. Technology: J.C. Microchip PICkit2 rev. The Phone on the Train Thing. Mobile phones. Cemetry. Pasties and miners bring Mexican minister to Cornwall. 4 May 2013Last updated at 02:51 ET By Lynne French BBC News, Cornwall When tin mining declined in Cornwall thousands went abroad to find work Gastronomes may associate tortillas, enchiladas and refried beans with Mexican food, but would they raise an eyebrow if the Cornish pasty was added to the list? 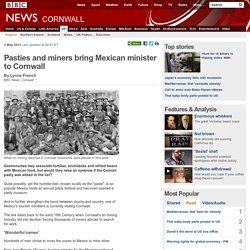 Quite possibly, yet the humble dish, known locally as the "paste", is so popular Mexico hosts an annual pasty festival and has even opened a pasty museum. And to further strengthen the bond between county and country, one of Mexico's tourism ministers is currently visiting Cornwall. The link dates back to the early 19th Century when Cornwall's tin mining industry fell into decline, forcing thousands of miners abroad to search for work. A Brief History of Cornish Pasties. There is still a great deal of debate as to the true origins of the pasty, but there is little doubt that the pasty has a long and famous Cornish history. 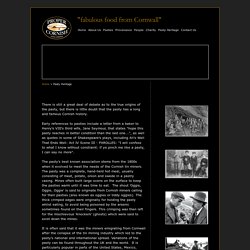 Early references to pasties include a letter from a baker to Henry's VIII's third wife, Jane Seymour, that states "hope this pasty reaches in better condition than the last one... ", as well as quotes in some of Shakespeare's plays, including All's Well That Ends Well: Act IV Scene III - PAROLLES: "I will confess to what I know without constraint: if ye pinch me like a pasty, I can say no more". The Levant Tin Mine, Cornwall. Tunnel visions: great escapes underground. The Taliban's escape from Kandahar prison is audacious, with 475 insurgents getting away through a 320 metre (1,050ft) tunnel. 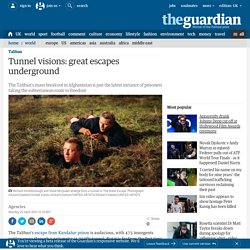 But it is far from the first time prisoners have dug their way out of jail ... Victoria Tunnel (Newcastle) The Victoria Tunnel is a subterranean wagonway that runs under Newcastle upon Tyne, England, from the Town Moor down to the River Tyne. 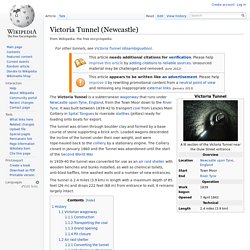 It was built between 1839-42 to transport coal from Leazes Main Colliery in Spital Tongues to riverside staithes (jetties) ready for loading onto boats for export. The tunnel was driven through boulder clay and formed by a base course of stone supporting a brick arch. Loaded wagons descended the incline of the tunnel under their own weight, and were rope-hauled back to the colliery by a stationary engine.

The Colliery closed in January 1860 and the Tunnel was abandoned until the start of the Second World War In 1939-40 the tunnel was converted for use as an air raid shelter with wooden benches and bunks installed, as well as chemical toilets, anti-blast baffles, lime washed walls and a number of new entrances. The Chicago Freight Tunnels. 1904 construction view of a completed tunnel with track and telephone conduits overhead © Bruce Moffat Collection Essay by Bruce G. 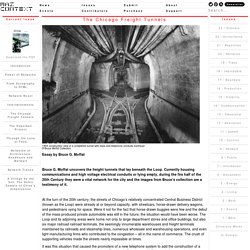 Moffat Bruce G. Moffat uncovers the freight tunnels that lay beneath the Loop. Currently housing communications and high voltage electrical conduits or lying empty, during the firs half of the 20th Century they were a vital network for the city and the images from Bruce’s collection are a testimony of it. BBC Nature - Mole videos, news and facts. Coursera. Meet our giant tunnelling machines... - Crossrail.

We are using eight tunnel boring machines (TBMs) to construct the new rail tunnels under London. 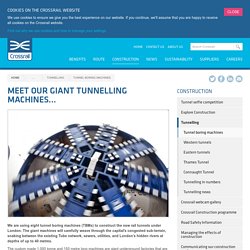 The giant machines will carefully weave through the capital's congested sub-terrain, snaking between the existing Tube network, sewers, utilities, and London’s hidden rivers at depths of up to 40 metres. The custom made 1,000 tonne and 150 metre long machines are giant underground factories that are not just tunnelling, but removing the muck and creating a sealed concrete tunnel as they go. Watch?v=VAzQ7Pn0Bbc&feature=youtu. Tunneling protocol. In computer networks, a tunneling protocol allows a network user to access or provide a network service that the underlying network does not support or provide directly. 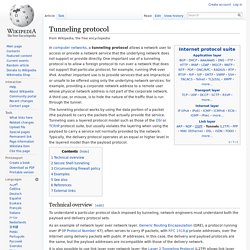 One important use of a tunneling protocol is to allow a foreign protocol to run over a network that does not support that particular protocol; for example, running IPv6 over IPv4. Another important use is to provide services that are impractical or unsafe to be offered using only the underlying network services; for example, providing a corporate network address to a remote user whose physical network address is not part of the corporate network.