Python Unicode Encode Error. Starting Out — Twython 3.3.0 documentation. This section is going to help you understand creating a Twitter Application, authenticating a user, and making basic API calls Beginning First, you’ll want to head over to and register an application! 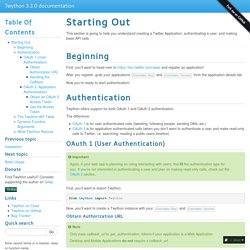 After you register, grab your applications Consumer Key and Consumer Secret from the application details tab. Twitter 1.17.1. An API and command-line toolset for Twitter (twitter.com) Python Twitter Tools==================== [! 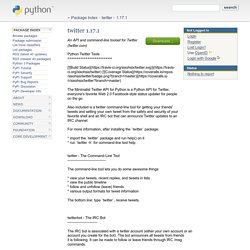 [Build Status]( [! [Coverage Status]( The Minimalist Twitter API for Python is a Python API for Twitter,everyone's favorite Web 2.0 Facebook-style status updater for peopleon the go. Also included is a twitter command-line tool for getting your friends'tweets and setting your own tweet from the safety and security of yourfavorite shell and an IRC bot that can announce Twitter updates to anIRC channel. An Introduction to Text Mining using Twitter Streaming API and Python // Adil Moujahid // Data Analytics and more. Text mining is the application of natural language processing techniques and analytical methods to text data in order to derive relevant information. 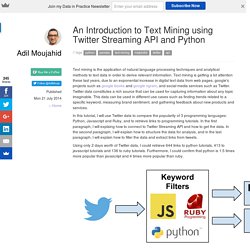 Text mining is getting a lot attention these last years, due to an exponential increase in digital text data from web pages, google's projects such as google books and google ngram, and social media services such as Twitter. Twitter data constitutes a rich source that can be used for capturing information about any topic imaginable. This data can be used in different use cases such as finding trends related to a specific keyword, measuring brand sentiment, and gathering feedback about new products and services. In this tutorial, I will use Twitter data to compare the popularity of 3 programming languages: Python, Javascript and Ruby, and to retrieve links to programming tutorials.

In the first paragraph, I will explaing how to connect to Twitter Streaming API and how to get the data. API stands for Application Programming Interface. A beginners guide to streamed data from Twitter. A few months ago, Shawn Allen and I taught a class on visualizing and mapping data at GAFFTA. 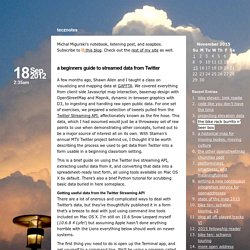 We covered everything from client-side Javascript map interaction, basemap design with OpenStreetMap and Mapnik, dynamic in-browser graphics with D3, to ingesting and handling raw open public data. For one set of exercises, we prepared a selection of tweets pulled from the Twitter Streaming API, affectionately known as the fire hose. Untitled. 3 Speeds: If you were feeling a little lost in class you might watch all the videos in the first clump. 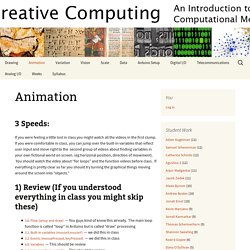 If you were comfortable in class, you can jump over the built-in variables that reflect user input and move right to the second group of videos about finding variables in your own fictional world on screen. (eg horizonal position, direction of movement). You should watch the video about “for loops” and the function videos before class. If everything is pretty clear so far you should try turning the graphical things moving around the screen into “objects.” Assignment 3: Entity extraction. For this assignment you will evaluate the performance of OpenCalais, a commercial entity extraction service. 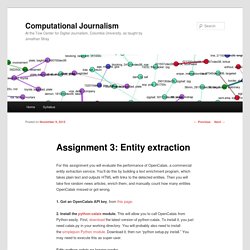 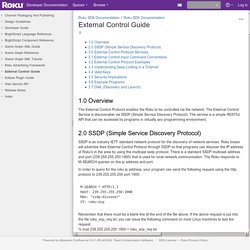 The External Control Service is discoverable via SSDP (Simple Service Discovery Protocol). The service is a simple RESTful API that can be accessed by programs in virtually any programming environment. SSDP is an industry IETF standard network protocol for the discovery of network services. Controlling your Roku with a voice interface (via Amazon Echo) Amazon Echo is the Siri for your home. 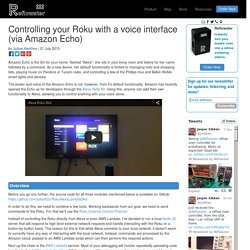 Named "Alexa", she sits in your living room and listens for her name followed by a command. As a new device, her default functionality is limited to managing todo and shopping lists, playing music on Pandora or TuneIn radio, and controlling a few of the Phillips Hue and Belkin WeMo smart lights and devices. The power and value of the Amazon Echo is not, however, from it's default functionality. Amazon has recently opened the Echo up for developers through the Alexa Skills Kit. WolframAlpha API: Documentation. The Wolfram|Alpha Webservice API provides a web-based API allowing the computational and presentation capabilities of Wolfram|Alpha to be integrated into web, mobile, desktop, and enterprise applications. 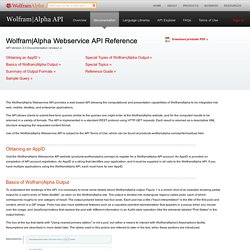 The API allows clients to submit free-form queries similar to the queries one might enter at the Wolfram|Alpha website, and for the computed results to be returned in a variety of formats. The API is implemented in a standard REST protocol using HTTP GET requests. Each result is returned as a descriptive XML structure wrapping the requested content format. Wolframalpha 1.2. Wolfram|Alpha 2.0 API client Installation. 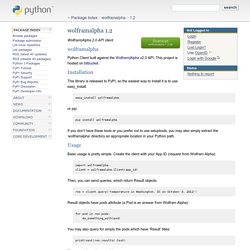 Simple query request with Wolfram api. How to Politely Download All English Language Text Format Files from Project Gutenberg. There are plenty of projects that can make good use of a large assembly of written works in a specific language. Training neural networks, testing natural language processing, use of Markov chains for generating content, and so on and so forth. Google Knowledge Graph Explained by Search Engine Land. An Alexa Skills Kit (ASK) JavaScript Cookbook. Implementing an Alexa skill requires a free developer account with Amazon as well as a secure web service. It is easier by far to let Amazon handle this with Amazon Web Services Lambda. Opening an AWS account requires entering a credit card number, but Amazon says explicitly this service is free for most developers. Documentation for Alexa Skills Kit (ASK): Skills are run by waking Alexa and uttering one of the supported launch words followed by the invocation name.

Initially supported launch words include. Core Python Programming: Accessing Gmail from Python (plus BONUS) NOTE: The code covered in this blogpost is also available in a video walkthrough here. Introduction.   Google Developers. There are two ways to send email using the Gmail API: You can send it directly using the messages.send method.You can send it from a draft, using the drafts.send method. Emails are sent as base64url encoded strings within the raw property of a message resource. The high-level workflow to send an email is to: Create the email content in some convenient way and encode it as a base64url string.Create a new message resource and set its raw property to the base64url string you just created.Call messages.send, or, if sending a draft, drafts.send to send the message.

LyricWiki. LyricWiki is an online lyrics database.[2] In March 2013, it was the seventh largest MediaWiki installation[3] with over 1,700,000 content pages.[4] Users on the site can view, edit, and discuss the lyrics of songs, which are also available for purchase from links on the site.[5] The site is searchable by song, artist, album, genre, hometown, label, and language.[2] Users are told to be mindful of copyright while contributing,[6] and copyright violations are removed upon request.[7] History[edit] The site was released in April 2006 by Sean Colombo while a student at Rochester Institute of Technology and soon after won the DreamHost Site of the Month award for April 2006[8] which helped jump-start its growth since winners of the contest are announced in DreamHost's monthly newsletter which claims to have over 50,000 subscribers.