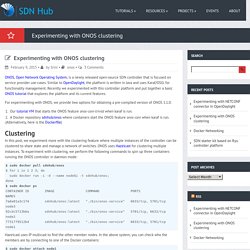 Similar to OpenDaylight, the platform is written in Java and uses Karaf/OSGi for functionality management. Recently we experimented with this controller platform and put together a basic ONOS tutorial that explores the platform and its current features. For experimenting with ONOS, we provide two options for obtaining a pre-compiled version of ONOS 1.1.0: ONOS from Scratch - ONOS - Wiki. Overview If you have come across Installing and Running ONOS, you'll notice that there are several ways to install and run ONOS. 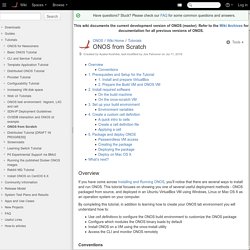 This tutorial focuses on showing you one of several useful deployment methods - ONOS packaged from source, and deployed in an Ubuntu VirtualBox VM using Windows, Linux or Mac OS X as an operation system on your computer. By completing this tutorial, in addition to learning how to create your ONOS lab environment you will understand how to: Getting Started OpenFlow OpenvSwitch Tutorial Lab : Setup. I wrote a Python OpenFlow installation app to automate an OpenFlow KVM and Open vSwitch setup found at:OpenFlow, OpenvSwitch and KVM SDN Lab Installation App → Getting Started OpenFlow OpenvSwitch Tutorial Lab : This is an OpenFlow Tutorial using OpenvSwitch and Floodlight controller but any other controller or switch can be used. 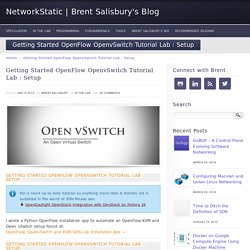 I have had some requests on some scenarios so I put this together. Adding a few more flexible components. Getting to know all of these packages like KVM, OpenvSwitch are going to be pretty big in the future ecosystem orchestrations. The video doesn’t have any sound, I am tight on time, sorry. The KVM requires an x86 machine with either Intel VT or AMD w/AMD-V support. How to Build an SDN Lab without Needing OpenFlow Hardware Switches. How do you build a networking lab without networking equipment? 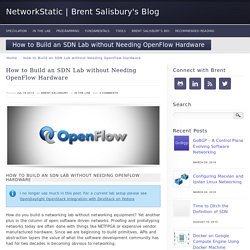 Yet another plus in the column of open software driven networks. Proofing and prototyping networks today are often done with things like NETFPGA or expensive vendor manufactured hardware. Since we are beginning to build primitives, APIs and abstraction layers the value of what the software development community has had for two decades is becoming obvious to networking. Control a Slice of a real Network · mininet/openflow-tutorial Wiki. NOTE: This part is still in beta, so be prepared that things could break down the road... 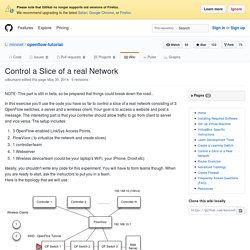 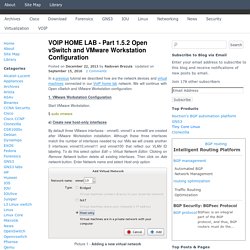 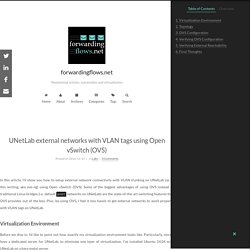 Some of the biggest advantages of using OVS instead of traditional Linux bridges (i.e. default pnet networks on UNetLab) are the state-of-the-art switching features that OVS provides out of the box. Plus, by using OVS, I feel it less hassle to get external networks to work properly with VLAN tags on UNetLab. Virtualization Environment Before we dive in, I’d like to point out how exactly my virtualization environment looks like. Particularly, since I have a dedicated server for UNetLab, to eliminate one layer of virtualization, I’ve installed Ubuntu 14.04 with UNetLab on a bare metal server. Open vSwitch on VirtualBox - NetworkStatic. Here is a quick tutorial for installing Open vSwitch on VirtualBox. 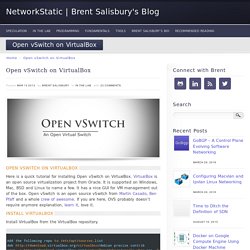 VirtualBox is an open source virtualization project from Oracle. It is supported on Windows, Mac, BSD and Linux to name a few. It has a nice GUI for VM management out of the box. Open vSwitch is an open source vSwitch from Martin Casado, Ben Pfaff and a whole crew of awesome. If you are here, OVS probably doesn’t require anymore explanation, learn it, love it. Install VirtualBox from the VirtualBox repository. Install Open vSwitch from Package. Install dependencies and install from source on Ubuntu Linux. To setup the virtual interfaces use Tuntap.

For testing Open vSwitch or any other hypervisor testing, I highly recommend this Linux image linux-0.2.img. Libvirt - Intro and Basic Configuration. I’ve been hearing a lot about libvirt, so I figured I’d check it out, and see if I could play around with it in my own home lab. 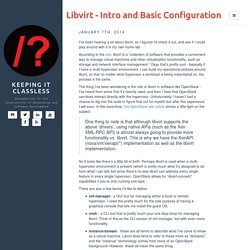 According to the wiki, libvirt is a ”collection of software that provides a convenient way to manage virtual machines and other virtualization functionality, such as storage and network interface management.” Okay that’s pretty cool - basically if I have a multi-hypervisor environment, I can build my operational policies around libvirt, so that no matter what hypervisor a workload is being instantiated on, the process is the same.

The thing I’ve been wondering is the role of libvirt in software like OpenStack - I’ve heard from some that it’s heavily used, and then I hear that OpenStack can/does interact directly with the hypervisor. Unfortunately I haven’t had a chance to dig into the code to figure that out for myself, but after this experience, I will soon. In the meantime, this OpenStack wiki article shines a little light on the subject: OpenFlow » Enabling research with OpenFlow. These videos demonstrate different research experiments that build on top of OpenFlow. 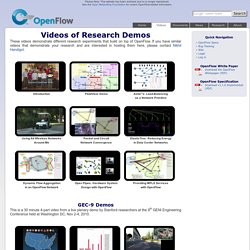 If you have similar videos that demonstrate your research and are interested in hosting them here, please contact Nikhil Handigol. Introduction FlowVisor Demo Aster*x: Load-Balancing as a Network Primitive Using All Wireless Networks Around Me Packet and Circuit Network Convergence ElasticTree: Reducing Energy in Data Center Networks Dynamic Flow Aggregation in an OpenFlow Network Open Pipes: Hardware System Design with OpenFlow Providing MPLS Serviceswith OpenFlow This is a 30 minute 4-part video from a live plenary demo by Stanford researchers at the 9th GENI Engineering Conference held at Washington DC, Nov 2-4, 2010.

What is software-defined networking (SDN)? - Definition from WhatIs.com. Software-defined networking (SDN) is an umbrella term encompassing several kinds of network technology aimed at making the network as agile and flexible as the virtualized server and storage infrastructure of the modern data center. The goal of SDN is to allow network engineers and administrators to respond quickly to changing business requirements. In a software-defined network, a network administrator can shape traffic from a centralized control console without having to touch individual switches, and can deliver services to wherever they are needed in the network, without regard to what specific devices a server or other hardware components are connected to.

The key technologies for SDN implementation are functional separation, network virtualization and automation through programmability. By submitting your personal information, you agree that TechTarget and its partners may contact you regarding relevant content, products and special offers. SDN notes. GCN VMware Carahsoft SDN 2014. Implementing IBM SDN for VE.

University of Luxembourg - Daylight Project. One of the great things about open source projects is that they provide a solid, easily available, and generally well documented basis for university research. This generally gives researchers the ability to concentrate just on the algorithms and instrumentation which they are interested in, without having to completely develop a software suite for the subject area they are studying. In the Interdisciplinary Centre for Security, Reliability and Trust (SnT) at the University of Luxembourg, researchers are using OpenDaylight as basis for addressing specific aspects in the context of the ongoing Cognitive Software Defined Networks (CoSDN) project.

CoSDN seeks to combine the efficiency of SDN with cognitive learning algorithms and enhanced protocols to automatise SDN systems. To this aim, the team under the supervision of Prof. Thomas Engel, is adopting OpenDaylight to tackle two directions: Attack Detection (through learning): Having Defense4All as starting point, Dr. Contact details. OpenDaylight Application Developers' Tutorial. This tutorial is intended for developers new to SDN application development with OpenDaylight. We have come a long way from the earlier version of this tutorial to focus on MD-SAL, and Karaf in this tutorial. While OpenDaylight is not simply an OpenFlow controller, OpenFlow continues to be a popular south-bound and we use this in this tutorial to introduce the platform.

An introductory presentation is available at slideshare. 1. Setup To get started, download and set up the SDN Hub Tutorial VM in Virtualbox or VMware. The tutorial application that we will work with is located in /home/ubuntu/SDNHub_OpenDaylight_tutorial directory. Before we start, we recommend you run the following commands to update the tutorial code, which is available at. Useful mininet setups. Mininet is a network emulation platform that is very useful to test SDN applications that you build. It can support different types of topologies.