Johnson Garcia LLP is a law firm founded with the sole objective of helping clients recover their damages after injury. Founding partners Daniel Johnson and Juan Garcia spent over 25 years combined representing some of the world’s largest companies in the some of the world’s most complex business and personal injury disputes and related catastrophes.

WHY SPEED-RELATED ACCIDENTS IN TEXAS HAVE SPIKED DURING COVID-19. The Covid-19 pandemic and its resulting stay-at-home orders and business closures have meant far less volume on Texas roads, but, strangely, the number of speed-related accidents has spiked despite the presence of fewer vehicles, which has led accident victims to wonder whether they should get an attorney after a car accident. 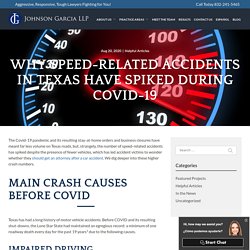 We dig deeper into these higher crash numbers. Main Crash Causes Before COVID Texas has had a long history of motor vehicle accidents. Before COVID and its resulting shut-downs, the Lone Star State had maintained an egregious record: a minimum of one roadway death every day for the past 19 years1 due to the following causes. Impaired Driving. GDL: A STRATEGY TO PREVENT TEEN DRIVER CRASHES. Novice drivers are far more likely than seasoned drivers to be involved in a fatal car crash. 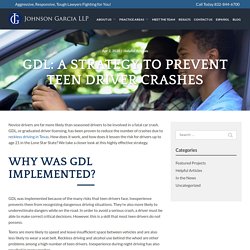 HOW DASH CAMS CAN MAKE A DIFFERENCE IN AN ACCIDENT. In today’s world of smart gadgets and vehicles with helpful back-up cam technology, additional features like dash cams are becoming more and more common. 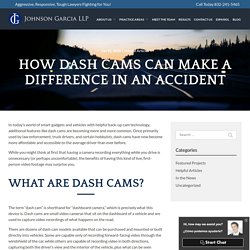 Once primarily used by law enforcement, truck drivers, and certain hobbyists, dash cams have now become more affordable and accessible to the average driver than ever before. While you might think at first that having a camera recording everything while you drive is unnecessary (or perhaps uncomfortable), the benefits of having this kind of live, first-person video footage may surprise you. What Are Dash Cams? The term “dash cam” is shorthand for “dashboard camera,” which is precisely what this device is. After the Car Accident: Head Injuries. Finding Justice for Injuries Caused by Reckless 18-Wheel Truck Drivers. Crash Course: The Most Common Injuries from a Car Accident.

Injuries from getting hit by a car or being involved in a car accident are common, and severe physical injuries and emotional trauma not only leave scars that may last forever, they can leave victims with medical expenses and uncompensated loss. 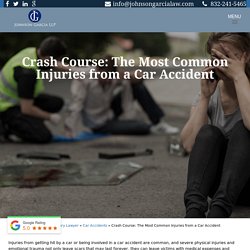 Turning to a car accident injury lawyer in Houston will steer you in the right direction for legal advice and support. In the United States, over 37,000 people are killed in road crashes annually, and more than 2.35 million are injured or disabled, according to car accident injury statistics.1 Some of the most common fatal injuries in car accidents involve motorcycles. Without the protective shell of a vehicle with seat belts and air bags, a motorcyclist is 37 times more likely to be fatally injured than a driver or passenger in a car.1 Vehicle injuries fall into a wide spectrum of severity, but even seemingly minor injuries can have a significant impact on immediate finances and future quality of life.

Most Common Car Accident Injuries Source: 7 Common Reasons Why an Injury Lawyer Will Not Take a Case. The Great Benefits of Using a Business Contingency Lawyer in Houston. Business owners of small- and medium-sized operations understand how difficult it can be to address legal issues requiring litigation when having to pay for legal fees upfront. 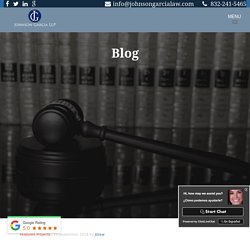 One effective way to ensure your business gets the legal representation it requires is by hiring a business contingency lawyer in Houston experienced with business litigation matters. What Is a Business Contingency Lawyer? A business contingency lawyer is rather similar to regular contingency fee lawyer used for personal matters, like personal injury claims. Law for Entrepreneurs: Settling Business Owner Disputes. Guide to Submitting an OSHA Safety and Health Complaint. As an employee, you are entitled by federal law to a safe working environment, and this law requires your employer to provide it. 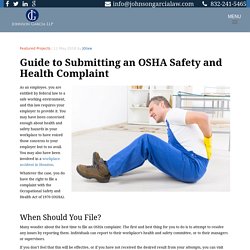 Guide to Understanding Auto Insurance Policies. If you’ve been involved in a car accident, there are a few things to make sure you do. 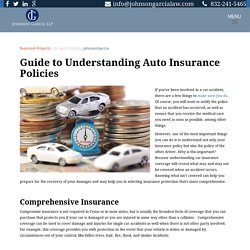 Of course, you will want to notify the police that an accident has occurred, as well as ensure that you receive the medical care you need as soon as possible, among other things. However, one of the most important things you can do is to understand not only your insurance policy but also the policy of the other driver. Why is this important? Because understanding car insurance coverage will reveal what may and may not be covered when an accident occurs. To Sue or Not to Sue? Six Factors That May Influence Your Decision.

The Recent Rollback in Offshore Safety Regulations. Current and Future Effects In the immediate future, the rollback of these regulations is expected to boost activity in the oil industry, and proponents argue that their removal will not significantly affect environmental or worker safety. 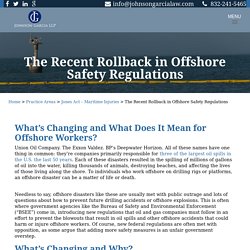 Opponents and environmental groups disagree, however, arguing that the restrictions were key to preventing future disasters and employee fatalities. If the rollbacks do have a serious effect on the reliability of equipment and the activities of private oil companies, it could increase the future risk of harm to offshore workers and the environment.

Without these particular federal oversights, companies may be tempted to cut corners with regard to safety enforcement and inspections. Trucking Accident Injuries: Risks, Repercussions, and How to Move Forward. According to data from the Texas Department of Transportation, 6,687 semi truck accidents in 2016 involved an injury of some kind (including fatal injuries). 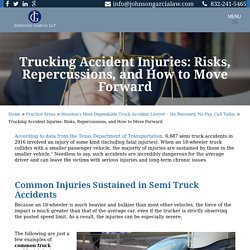 When an 18-wheeler truck collides with a smaller passenger vehicle, the majority of injuries are sustained by those in the smaller vehicle.¹ Needless to say, such accidents are incredibly dangerous for the average driver and can leave the victims with serious injuries and long-term chronic issues. Common Injuries Sustained in Semi Truck Accidents Because an 18-wheeler is much heavier and bulkier than most other vehicles, the force of the impact is much greater than that of the average car, even if the trucker is strictly observing the posted speed limit. As a result, the injuries can be especially severe. The following are just a few examples of common truck accident injuries: In the most severe of cases, the injuries sustained can lead to death, leaving the victim’s family to deal with the legal and financial issues that follow. Avoiding Car Accidents Throughout Winter. A record-breaking 107.3 million people likely hit the road to celebrate the holidays away from home this year, according to AAA.1 To put that number into perspective, from December 23rd to January 1st, alone, nearly a third of America’s population filled the streets, roads, highways, turnpikes, and expressways to visit family and friends. 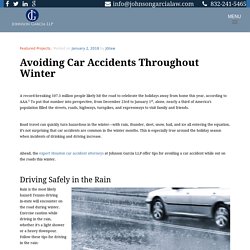 Road travel can quickly turn hazardous in the winter—with rain, thunder, sleet, snow, hail, and ice all entering the equation, it’s not surprising that car accidents are common in the winter months. This is especially true around the holiday season when incidents of drinking and driving increase. Ahead, the expert Houston car accident attorneys at Johnson Garcia LLP offer tips for avoiding a car accident while out on the roads this winter. Driving Safely in the Rain. What Are My Legal Rights as a Seaman? The Jones Act Law and Beyond. Worker’s compensation laws often cover employees who suffer injuries on the job, but they don’t apply to seamen who earn their living on waterborne vessels. Instead of seeking redress under state ordinances, injured seamen must turn to the Jones Act law and other maritime statutes that govern the relationship between offshore workers and their employers.

Because of the importance and danger of maritime work, federal statutes give offshore workers greater protection in the form of expanded legal rights. Dangerous Jobs: Keeping Track of Workplace Death & Injury Statistics. Ways to Prove Lost Wages After an Injury. Any kind of injury, whether it occurred as the result of a car accident or for some other reason, can force you or your loved one to have to miss work. If an injury is severe, this can mean a significant decrease in income, which can affect all aspects of your life. However, these wages can be recovered if they can be proven in court. What Does the Term “Lost Wages” Include? As mentioned, lost wages are generally defined by financial losses caused by missed time at work due to injury. It’s important to note here that the time missed may include both the hours missed during the work day as well as time taken for the treatment of your injuries.