Interactive Software Federation of Europe. The Videogames in Europe Consumer Study is a multi-country survey run by Ipsos MediaCT and commissioned by ISFE. 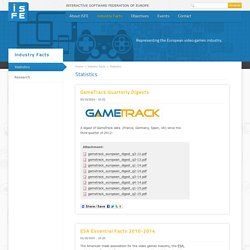 It is designed to provide a better understanding of the societal context in which games are being played today in 16 European countries. It provides detailed consumer statistics about gaming habits, broader media interests, online gameplay, gaming in a family context and the PEGI age rating system. All the individual country reports and the EU summary can be found below. Some highlights of the study are collected here. The study used a combination of online self-completion survey and offline interviews and targeted respondents aged between 16 and 64, including both videogame players and non-players from a broad demographic (gender, age, parents etc). Simon Little, Managing Director of ISFE says: "We are delighted to see gamers represented so broadly across the European population.

Gametrack_european_digest_q3-14.pdf. 2015 Video Game Statistics & Trends Who’s Playing What & Why? Last year Lisa Galarneau wrote a fantastic article on 2014 Global Gaming Stats. 2015 has crept up on us and it’s time to see some updated trends, statistics and information. 2014 was a turning point in many areas of the video games industry. 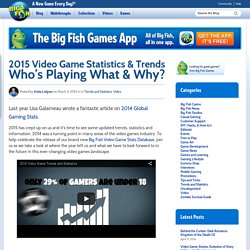 To help celebrate the release of our brand new Big Fish Video Game Stats Database, join us as we take a look at where the year left us and what we have to look forward to in the future in this ever-changing video games landscape. Who’s playing games? Over 59% of Americans play games That means that in America alone, over 150 million people play games. 150 million people spread over a vast variety of backgrounds, ages, genders, socioeconomic statuses. All of us are jumping into stories, swapping gummies, fighting foes, traveling through time, and finding hidden objects. Average age of the gamer is 31 This is up from 30 years old last year. Children and video games 29% of gamers are under 18 Video games are no longer seen as strictly toys for kids. 1. 2014 Global Gaming Stats: Who's Playing What, and Why? In this follow-up to Conor Murphy’s 2012 article Stereotype-defying Gaming Statistics, we’ll look at the global gaming landscape and highlight some of the shifting trends that will affect how 2014 shapes up in terms of games. 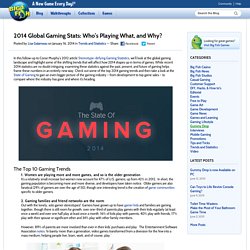 While recent 2014 statistics are no doubt intriguing, examining these statistics against the past, present, and future of gaming helps frame these numbers in an entirely new way. Check out some of the top 2014 gaming trends and then take a look at the State of Gaming to gain an even bigger picture of the gaming industry – from development to top game sales – to compare where the industry has gone and where it’s heading. The Top 10 Gaming Trends 1. Women are playing more and more games, and so is the older generationIt’s a relatively small increase but women now account for 47% of U.S. gamers, up from 42% in 2012. 2. However, 89% of parents are more involved than ever in their kids’ purchases and play. 3. 4. ESA_EF_2014. Classifier les Serious Games (Diffusion de nos travaux) History:The First Video Game? Tennis Anyone? 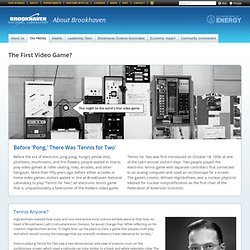 Higinbotham realized how static and non-interactive most science exhibits were at that time. As head of Brookhaven Lab’s Instrumentation Division, he would change that. While reflecting on his creation, Higinbotham wrote, “it might liven up the place to have a game that people could play, and which would convey the message that our scientific endeavors have relevance for society. " Visitors playing Tennis for Two saw a two-dimensional, side view of a tennis court on the oscilloscope screen, which used a cathode-ray tube similar to a black and white television tube. The ball, a brightly lit, moving dot, left trails as it bounced to alternating sides of the net. Hundreds of visitors lined up for a chance to play the electronic tennis game.

In 1982, Creative Computing magazine picked up on the idea that Tennis for Two might be the first video game ever and it published a story on the game in that year’s October issue. Classification guidelines. The online classification of videogames This site is an online and collaborative classification system suited to videogames, based on multiple criteria. 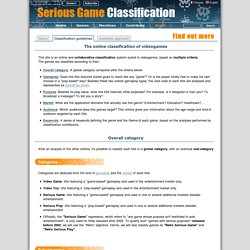 The games are classified according to their:Overall category: A global category computed after the criteria below.Gameplay: Does this title features stated goals to reach like any "game"? Or is the player totally free to make his own choices in a "play-based" way? Besides these two overall gameplay types, the core rules of each title are analysed and represented as GamePlay bricks.Purpose: Besides its play value, does this title features other purposes? 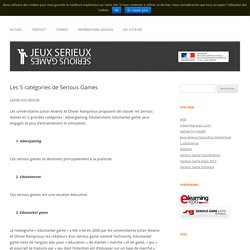