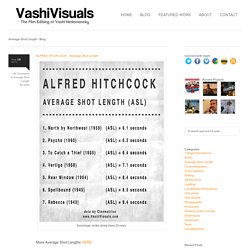 Mastering the Art of The Dolly Zoom. Learn about the history of the Dolly Zoom – from it’s conception by second unit cameraman Irmin Roberts for Alfred Hitchcock’s “Vertigo” through to its use in films like “Jaws” and “Goodfellas”. 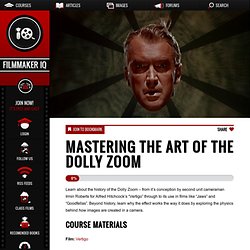 Beyond history, learn why the effect works the way it does by exploring the physics behind how images are created in a camera. Film: Vertigo. Looking for the Best Tripod for DSLR? Free Guide. FCP X: Soften Skin Texture Quickly. You are here: Home » Articles » Effects » FCP X: Soften Skin Texture Quickly Posted: September 1, 2013 For state-of-the-art skin softening and smoothing effects, check out Digital Anarchy’s Beauty Box. 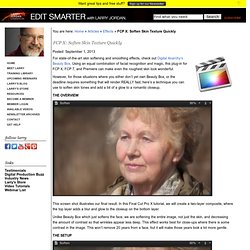 Using an equal combination of facial recognition and magic, this plug-in for FCP X, FCP 7, and Premiere can make even the roughest skin look wonderful. However, for those situations where you either don’t yet own Beauty Box, or the deadline requires something that will render REALLY fast, here’s a technique you can use to soften skin tones and add a bit of a glow to a romantic closeup. This screen shot illustrates our final result. ACTION! Filming A Fight Scene. A reposted article from The Wages of Cinema. 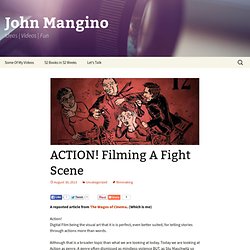 (Which is me) Action! The Mac Pro is dead, long live the Mac Pro. 10 MORE Filmmaking & Cinematography Sites You Should Be Reading. Kamerar Tank TK-2 Cage. The Kamerar Tank TK-2 cage with rods support The Tank DSLR video cage provides an infinite combination of mounting points for virtually any setup you can think of. 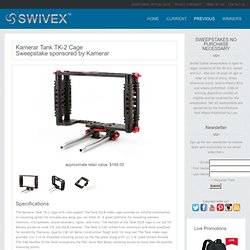 A great platform for mounting preview monitors, microphones, sound recorders, lights, and more. The bottom of the Tank DSLR cage is cut out for battery access on most full size DSLR cameras. Komputerbay 32GB 1000X CF (2X) This Komputerbay 32GB Compact Flash memory card allows you to download and store a huge number of photos, music, videos, and other media files to your Compact Flash-compatible electronic device. 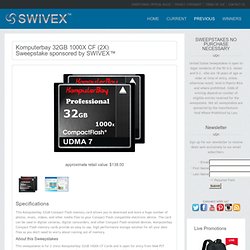 The card can be used in digital cameras, digital camcorders, and other Compact Flash-enabled devices. Komputerbay Compact Flash memory cards provide an easy to use, high performance storage solution for all your data files so you don't need to worry about running out of memory. About this SweepstakesThis sweepstakes is for 2 (two) Komputerbay 32GB 1000X CF Cards and is open for entry from 9AM PST 07/10/2013 until 5PM PST 07/17/2013. This item is a brand new USA model in original retail packaging. NO PURCHASE NECESSARY Open to legal residents of the 50 U.S. states and D.C. who are 18 years of age or older at time of entry. Colour grading breakdown. A Fluid Head Video Tripod For Only $149. Fancier FC-270A : Erik Naso. HitFilm: a new development. Kessler Parallax™ Andrewtimmins. When I was very young, my friends Steve Levine, Brian Levine, and I created a fanzine called … “I D E A T I O N” about all things Comics, Science Fiction, Horror, Fantasy, and Star Trek. 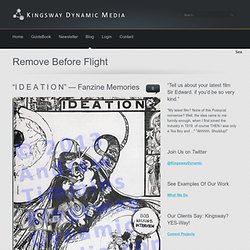 Read more “S P I R A L” – Art of the Street – NEW Film of the graffiti exhibit at the Triton Museum of Art, Santa Clara California. Some of the most exciting and innovative contemporary art is being produced not in STUDIOS, but on the STREETS. Indie films provide more depth than blockbusters - Campus Talk - The Stylus - The College at Brockport. Published: Tuesday, April 16, 2013 Updated: Tuesday, April 16, 2013 08:04 Ah, the ’90s. 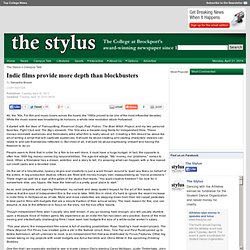 For film and music lovers across the board, the 1990s proved to be one of the most influential decades. Live coverage of NAB 2013 - via Teradek. If you’ve ever wondered what a conversation. The Haunted Swing Movie. Room 237: Kubrick's Conspiracy Theorists – Movie Reviews. Oblivion Sky Tower Exclusive Featurette. Digital Negative App Lets You Shoot RAW Photos with Your iPhone.

About a year ago, we shared an app called 645 Pro that saves photos shot with the iPhone (and other iOS devices) as TIFF files. 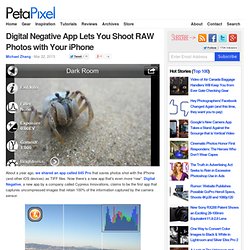 Now there’s a new app that’s even more “raw”. Digital Negative, a new app by a company called Cypress Innovations, claims to be the first app that captures uncompressed images that retain 100% of the information captured by the camera sensor. The app works on the iPhone, iPad, and the iPod Touch, and stores DNG (Digital Negative) files, just like the RAW DNG files produced by cameras that have signed onto the DNG standard. This means you’ll be able to pop the files into your favorite RAW processing program (e.g. WACOM PRODUCTS FOR VIDEO PRODUCTION. TheDerbiedOne: I know this image is tiny,... HD Warrior » Blog Archiv » Getting ready for Thunderbolt editing onto FCPX. After ordering my Pegasus R6 12TB Thunderbolt Raid solution from the Apple store it arrived three days later. 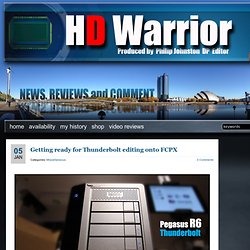 Firstly what they don’t tell you till you open the box is that this will self configure itself in Raid 5 but will take ten hours to do so, fortunately I am not using it with my Thunderbolt enabled MacBook Air so I switched it on pressed the orange button and it very quietly chuntered away to itself with all 12 blue LEDs flickering till the small hours of the morning. Once it’s happy with itself it switches off…job done. Horror Movie Beginner's Shelf. SISTER Short Film (full movie) New Short About to Shoot & I Need A Woman. JUST C IT ! (EOS C100)