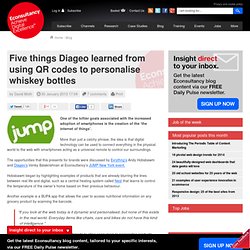 More than just a catchy phrase, the idea is that digital technology can be used to connect everything in the physical world to the web with smartphones acting as a universal remote to control our surroundings. The opportunities that this presents for brands were discussed by Evrythng’s Andy Hobsbawm and Diageo’s Venky Balakrishnan at Econsultancy’s JUMP New York event.

Hobsbawm began by highlighting examples of products that are already blurring the lines between real life and digital, such as a central heating system called Nest that learns to control the temperature of the owner’s home based on their previous behaviour. Another example is a BUPA app that allows the user to access nutritional information on any grocery product by scanning the barcode. If you look at the web today is it dynamic and personalised, but none of this exists in the real world. 1. 2. 3. Near Field Communications: a technology primer. Near field communication (NFC) has recently popped up in the news. 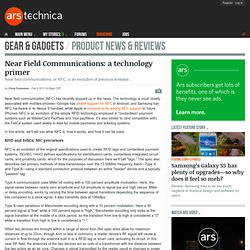 The technology is most closely associated with mobiles phones—Google has added support for NFC in Android, and Samsung has NFC hardware in its Nexus S handset, while Apple is rumored to be adding NFC support to future iPhones. NFC is an evolution of the simple RFID technology employed in "contactless" payment systems such as MasterCard PayPass and Visa payWave. It's also similar to (and compatible with) the FeliCa system used widely in Asia for mobile payments and ticketing systems. In this article, we'll tell you what NFC is, how it works, and how it can be used.

Blackberry. The Mobile Payment Rivalry Heats Up. 13 Tips To Improve Your Site&amp;#8217;s Accessibility From Mobile Devices. The advent of mobile phone internet access has signaled a change in the job description of the average web developer. 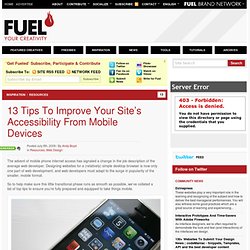 Designing websites for a (relatively) simple desktop browser is now only one part of web development, and web developers must adapt to the surge in popularity of the smaller, mobile format. So to help make sure this little transitional phase runs as smooth as possible, we’ve collated a list of top tips to ensure you’re fully prepared and equipped to take things mobile. Image: williamhook 1. Recognize The Difference Perhaps the most important thing to remember when designing for the mobile web is that it is a completely different format than that of the desktop browser. For example, lazy or slack coding that may go unnoticed on a large scale could be crucial when dealing with the much more concise mobile format. 2. A key principle to bear in mind is that when it comes to the mobile web, simple is always better. 3. 4. 5. 6. Open source app porting for BlackBerry, iPhone, WinMo etc.

International SIM card from Truphone Local Anywhere. Truphone is a widely popular VoIP provider that plans to offer a single SIM card allowing local call rates while roaming in a host of countries. 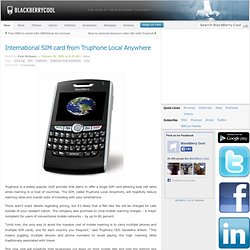 The SIM, called Truphone Local Anywhere, will hopefully reduce roaming rates and overall costs of traveling with your smartphone. There aren’t exact details regarding pricing, but it’s likely that a flat rate fee will be charged for calls outside of your resident nation. The company also promises to chop mobile roaming charges – a major complaint for users of conventional mobile networks – by up to 80 percent. “Until now, the only way to avoid the massive cost of mobile roaming is to carry multiple phones and multiple SIM cards, one for each country you frequent,” said Truphone CEO Geraldine Wilson.

“This means juggling multiple devices and phone numbers to avoid paying the high roaming rates traditionally associated with travel. [Via] Digital Producer £30k, London. We’re working with one of the most successful, fastest growing and proud award winning agencies that is grounded firmly in creative, digital and social media. They are expanding due to new business wins in the Entertainment, Media and Charity sectors and recruiting at a senior level to bolster their management team. They’re a company based ... Read more... We’re looking for a Technical Director for one of our most exciting clients – Innovative, Award Winning and a new breed of Digital Marketing Agency.

They’re a leading ‘Social Media Focussed’ Agency with Global Offices in 6 cities, and a HQ here in Central London, who is responsible for engaging with customers and building online ... We’re looking for a talented Account Director for one of London’s fastest growing and most successful Social Media Marketing agencies. 33 Mobile SEO &amp; Mobile Analytics Resources.