Stephen Hawking and God. Posted by John Lennox on November 23, 2010 Topic: Just Thinking Magazine In his latest book, the world’s most eminent physicist Stephen Hawking argues that the laws of physics, not the will of God, provide the real explanation as to how life on earth came into being. 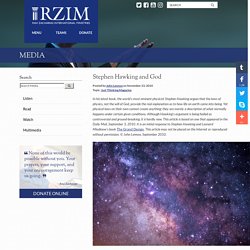 Firstly, Hawking’s view of God is inadequate. Yet Hawking seems to think they did. 9 C. Richard Dawkins: The state needs to ‘protect’ children from religion…and their parents. March 4, 2015 (LifeSiteNews.com) -- Although there has always been contraception, its acceptance and practice by society as a whole is a relatively new phenomenon. 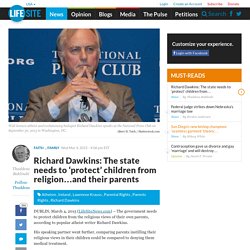 In the first part of the 20th century barrier methods became through mass production increasingly used. However, with the advent of the hormonal contraceptive pill in the 1960s the contraceptive era, ushering in the sexual revolution, really took off. The term “revolution” is by no means exaggerated, for the result was a fundamental change in the understanding of human sexuality in society. With the pill, people thought, nothing can happen, i.e. no child could be conceived.

Inhibitions broke down, so that there was an increase in adultery, living together before marriage and living together with no thought of marriage. The assumption that “nothing can happen” is erroneous, because contraceptives are by no means 100% effective. Atheism and Agnosticism. First published Tue Mar 9, 2004; substantive revision Mon Aug 8, 2011 The main purpose of this article is to explore the differences between atheism and agnosticism, and the relations between them. 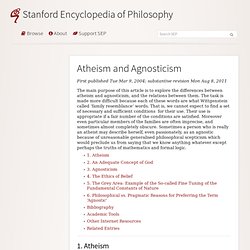 The task is made more difficult because each of these words are what Wittgenstein called ‘family resemblance’ words. That is, we cannot expect to find a set of necessary and sufficient conditions for their use. Their use is appropriate if a fair number of the conditions are satisfied. Moreover even particular members of the families are often imprecise, and sometimes almost completely obscure.

Brights movement. Symbol of the Brights The Brights movement is a sociocultural movement that aims to promote public understanding and acknowledgment of naturalistic, unspiritual and irreligious worldviews, including equal civil rights and popular acceptance for adherents of such belief systems. It was co-founded by Mynga Futrell and Paul Geisert in 2003. The movement aims to create an Internet constituency that will pursue the following aims:[1] Promote the civic understanding and acknowledgment of the naturalistic worldview, which is free of supernatural and mystical elements;Gain public recognition that persons who hold such a worldview can bring principled actions to bear on matters of civic importance;Educate society toward accepting the full and equitable civic participation of all such individuals.

The Brights movement distinguishes itself from traditional membership organizations by focusing on the development of a broad public constituency capable of including members of many narrower categories. The Atheism Tapes. The Atheism Tapes is a 2004 BBC television documentary series presented by Jonathan Miller. 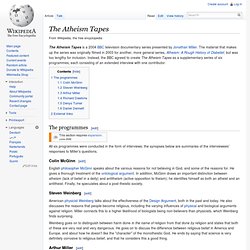 The material that makes up the series was originally filmed in 2003 for another, more general series, Atheism: A Rough History of Disbelief, but was too lengthy for inclusion. Instead, the BBC agreed to create The Atheism Tapes as a supplementary series of six programmes, each consisting of an extended interview with one contributor. The programmes[edit] All six programmes were conducted in the form of interviews; the synopses below are summaries of the interviewees' responses to Miller's questions. Colin McGinn[edit] English philosopher McGinn speaks about the various reasons for not believing in God, and some of the reasons for. Steven Weinberg[edit] American physicist Weinberg talks about the effectiveness of the Design Argument, both in the past and today. Arthur Miller[edit] American playwright Arthur Miller talks about his atheism from a Jewish perspective. Richard Dawkins[edit]