Www.lifesitenews. PragerU - Who's More Pro-Choice: Europe or America? “After-birth abortion”: How right-wing Web sites turned my old article into a fake news story. Photo by Joe Raedle/Getty Images Have you heard the news? 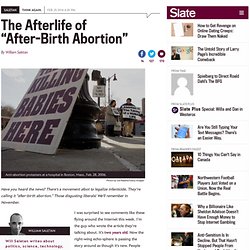 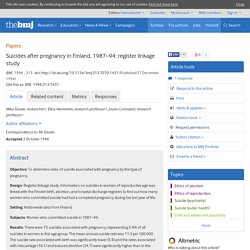 Design: Register linkage study. Information on suicides in women of reproductive age was linked with the Finnish birth, abortion, and hospital discharge registers to find out how many women who committed suicide had had a completed pregnancy during her last year of life. ‘It was the head of my baby’: 8 unbelievably heart-rending quotes from women who aborted their babies. We as a society are constantly bombarded with the pro-choice rhetoric that abortion is sometimes necessary. 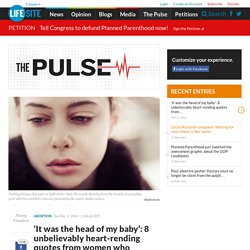 We also hear the words of post-abortive women like Cecile Richards who will say that their abortions were the right thing to do. But whether they are stuffing down their emotions or just plain lying, abortion is never a happy ending. It kills a child and leaves a mother to live the rest of her life with the knowledge that she took her child’s life. Nothing brings that pain to light better than the words directly from the mouths of everyday post-abortive mothers who are ignored by the major media outlets. Unlike Richards, these women have nothing to gain from sharing their stories. Networks censor release of fifth Planned Parenthood baby parts video: continue lion coverage. (LiveActionNews) - It should have been a routine abortion in the early second trimester. 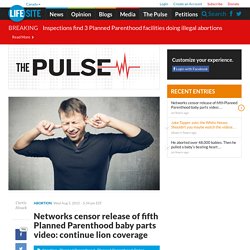 The woman was having her ninth abortion, as former Serbian abortionist Stojan Adasevic describes in the documentary “The First Hour.” Adasevic, who is now a pro-life leader in Serbia, had performed over 48,000 abortions before doubts about the procedure made him stop —other sources claim that number is closer to 60,000. Adasevic credits his pro-life conversion to two things: an unusual series of dreams, and this particularly disturbing experience he had while performing what should have been a routine abortion. He describes the procedure: I opened up the womb, tore the placenta, the birth waters flowed out, and I got to work on the inside with my abortion forceps.

The Metaphysics of Caitlyn & Planned Parenthood. I had a very of-the-moment experience the other night at bedtime in my hotel room. 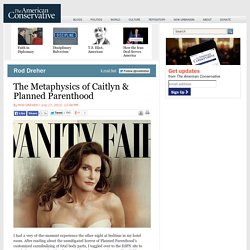 After reading about the unmitigated horror of Planned Parenthood’s customized cannibalizing of fetal body parts, I toggled over to the ESPN site to watch the propaganda video the network made to set up its awarding Caitlyn Jenner its Arthur Ashe Courage Prize. I encourage you to watch the clip, which is about 13 minutes long. It is a remarkable piece of work, and profoundly indicative of the deepest metaphysical assumptions of Western culture today.

Jenner’s heroism, according to the film, consists in his dramatic refusal of Nature — of imposing his own will and desires on nature so profoundly that he repudiates his own nature as a male. National Democratic Party Chair Supports Late-Term Abortions: No Limits "Period. End of Story" The head of the Democratic Party made it clear today. 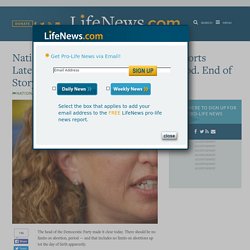 There should be no limits on abortion, period — and that includes no limits on abortions up tot the day of birth apparently. Democratic National Committee chair Debbie Wasserman Schultz responded to a challenge from Republican presidential candidate Rand Paul today to answer the question of whether or not she would support aborting a 7-pound unborn baby. 41 Quotes From Medical Textbooks Prove Human Life Begins at Conception. Here is a list of 41 quotes from medical experts and medical textbooks that prove human life begins at conception/fertilization. 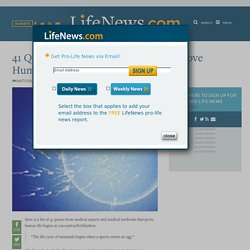 “The life cycle of mammals begins when a sperm enters an egg.” Okada et al., A role for the elongator complex in zygotic paternal genome demethylation, NATURE 463:554 (Jan. 28, 2010) “Fertilization is the process by which male and female haploid gametes (sperm and egg) unite to produce a genetically distinct individual.” Signorelli et al., Kinases, phosphatases and proteases during sperm capacitation, CELL TISSUE RES. 349(3):765 (Mar. 20, 2012) “The oviduct or Fallopian tube is the anatomical region where every new life begins in mammalian species. Coy et al., Roles of the oviduct in mammalian fertilization, REPRODUCTION 144(6):649 (Oct. 1, 2012) (emphasis added). “Fertilization – the fusion of gametes to produce a new organism – is the culmination of a multitude of intricately regulated cellular processes.”

Marcello et al., Fertilization, ADV. Keith L. “Landrum B. Descriptions from abortionists themselves illustrate why dismemberment abortions must be ended. By Andrew Bair Not long ago, Americans from both sides of the aisle came together to protect unborn children from the unspeakable cruelty of partial-birth abortion. 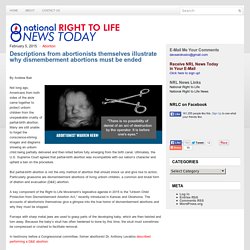 Many are still unable to forget the conscience-stirring images and diagrams showing an unborn child being partially delivered and then killed before fully emerging from the birth canal. Ultimately, the U.S. Supreme Court agreed that partial-birth abortion was incompatible with our nation’s character and upheld a ban on the procedure. 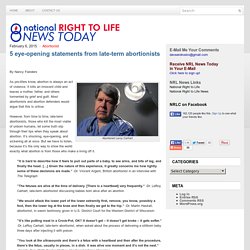 It kills an innocent child and leaves a mother, father, and others tormented by grief and guilt.