The Lean Canvas - wrong tool for the job? Benjamin Kampmann, a reputable hacker and product manager, relays his experience with the Lean Canvas over the past few years, in particular how it removed his attention from the customers that actually wanted his product: The likelihood of the end technology still being a great fit for the market you decided on at the beginning is rather small. 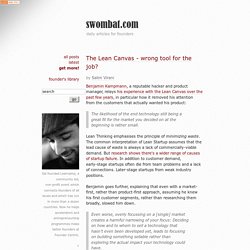 Lean Thinking emphasises the principle of minimizing waste. The common interpretation of Lean Startup assumes that the lead cause of waste is always a lack of commercially-viable demand. But research shows there's a wider range of causes of startup failure. In addition to customer demand, early-stage startups often die from team problems and a lack of connections. Benjamin goes further, explaining that even with a market-first, rather than product-first approach, assuming he knew his first customer segments, rather than researching them broadly, slowed him down. Happy Startup New Year! Workshops & Events - Reboot: Reboot your Leadership. Reboot your Life.

Brad Woodward sur Twitter : "We are the one's who knock #SWABQ - #StartUpWeekend #GSB2014 @aleximenez @joecardillo... Brad Woodward sur Twitter : "#SWABQ is happening all weekend at @CNMSTEMulus #StartUpWeekend #GEWabq @nyikaaa @joecardillo... Sign Up. Albuquerque's Plan To Build The Most Entrepreneur-Friendly City In America. How Optimizely (Almost) Got Me Fired. It had been six months since we started concerted A/B testing efforts at SumAll, and we had come to an uncomfortable conclusion: most of our winning results were not translating into improved user acquisition. 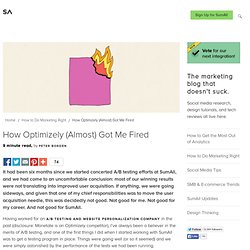 If anything, we were going sideways, and given that one of my chief responsibilities was to move the user acquisition needle, this was decidedly not good. Not good for me. Not good for my career. And not good for SumAll. Having worked for an A/B testing and website personalization company in the past (disclosure: Monetate is an Optimizely competitor), I’ve always been a believer in the merits of A/B testing, and one of the first things I did when I started working with SumAll was to get a testing program in place.

Optimizely had been predicting huge gains, known as “lift,” from our efforts. What threw a wrench into the works was that SumAll isn’t your typical company. Much to our chagrin, they didn’t. The importance of a focused, audience-centric narrative — Compass. When you’re trying to start a company, your mind fills with dozens of narratives that energize you about the impact of your idea. 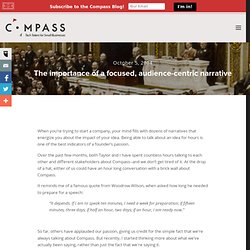 Being able to talk about an idea for hours is one of the best indicators of a founder’s passion. Over the past few months, both Taylor and I have spent countless hours talking to each other and different stakeholders about Compass--and we don’t get tired of it. At the drop of a hat, either of us could have an hour long conversation with a brick wall about Compass. It reminds me of a famous quote from Woodrow Wilson, when asked how long he needed to prepare for a speech: “It depends. So far, others have applauded our passion, giving us credit for the simple fact that we’re always talking about Compass. It became obvious that we didn’t have a clear, focused message in each conversation that we were having. Here are some examples: Essentially, we’ve been like Woodrow Wilson giving an hour long speech. Who is the audience? Why Execution Is Everything In Business. Building a product operations team. How to Survive Your Start-up's First Year.

A Framework for Startup Marketing Effectiveness. Day 10 of 45: The Big Meeting. 11.42pm. 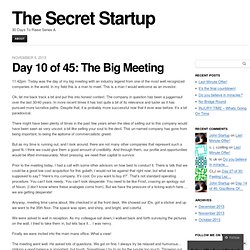 Today was the day of my big meeting with an industry legend from one of the most well recognized companies in the world. In my field this is a man to meet. This is a man I would welcome as an investor. Ok, let me back track a bit and put this into honest context. The company in question has been a juggernaut over the last 30/40 years. There might have been plenty of times in the past few years when the idea of selling out to this company would have been seen as very uncool; a bit like selling your soul to the devil. But as my time is running out, and I look around, there are not many other companies that represent such a good fit. Vancouver steps up as next tech hot spot. Oct 09, Technology/Business If you follow the money, the Northwest's hottest startup is now 140 miles north of Seattle. 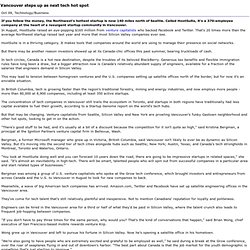 Called HootSuite, it's a 370-employee company at the heart of a resurgent startup community in Vancouver. In August, HootSuite raised an eye-popping $165 million from venture capitalists who backed Facebook and Twitter. That's 20 times more than the average Northwest startup raised last year and more that most Silicon Valley companies ever see. HootSuite is in a thriving category. But there may be another reason investors showed up at its Canada-chic offices this past summer, bearing truckloads of cash.

In tech circles, Canada is a hot new destination, despite the troubles of its beloved BlackBerry. This may lead to tension between homegrown ventures and the U.S. companies setting up satellite offices north of the border, but for now it's an enviable situation. But that may be changing. #StartupDay Across America, 2013. About Sympoz.