The Scientist Magazine® Green: Vegetation on Our Planet. Animal and Plant Cell Differences, Cell Biology Homework. Rwanda’s rainforest renewal : National Parks, Africa. When choosing Rwanda as a holiday destination, many people are keen to see the country’s rare primates and learn about its dark past. 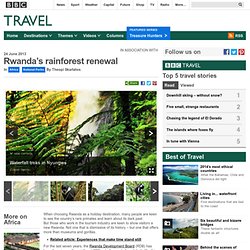 But those who work in the tourism industry are keen to show visitors a new Rwanda. Not one that is dismissive of its history – but one that offers more than museums and gorillas. Related article: Experiences that make time stand still For the last seven years, the Rwanda Development Board (RDB) has been focusing on the rainforest 200km to the west of capital city Kigali in a bid to attract adventurous travellers. Created as a national park in 2004, Nyungwe is full of waterfall treks, colobus monkey spotting and canopy walkways – and thanks to the recently improved road infrastructure from Kigali – is easily accessible. “In the past people would often have stayed in Rwanda for just a few days, perhaps as part of a wider Africa trip,” said Manzi Kayihura, president of the Rwanda Tours and Travel Association.

Inside a Cell. Science. Solar-powered sea slug harnesses stolen plant genes - life - 24 November 2008. Video: Watch a sea slug eat algae to nab some of its chloroplasts, and the genes that keep them functioning It's the ultimate form of solar power: eat a plant, become photosynthetic. 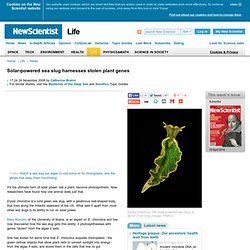 Now researchers have found how one animal does just that. Elysia chlorotica is a lurid green sea slug, with a gelatinous leaf-shaped body, that lives along the Atlantic seaboard of the US. What sets it apart from most other sea slugs is its ability to run on solar power. Mary Rumpho of the University of Maine, is an expert on E. chlorotica and has now discovered how the sea slug gets this ability: it photosynthesises with genes "stolen" from the algae it eats.

She has known for some time that E. chlorotica acquires chloroplasts - the green cellular objects that allow plant cells to convert sunlight into energy - from the algae it eats, and stores them in the cells that line its gut. But a mystery remained. Gene 'theft' Human photosynthesis? It is unlikely humans could become photosynthetic in this way. 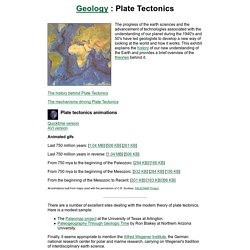 There are a number of excellent sites dealing with the modern theory of plate tectonics. The Paleomap project at the University of Texas at Arlington.Paleogeography Through Geologic Time by Ron Blakey at Northern Arizona University. Finally, it seems appropriate to mention the Alfred Wegener Institute, the German national research center for polar and marine research, carrying on Wegener's tradition of interdisciplinary earth science.

Sources: S. Blue Carbon - The Role of Healthy Oceans in Binding Carbon. Global Ocean Acidification As carbon concentrations in the atmosphere increase, so do concentrations in the ocean, with resultant acidification as a natural chemical process. 06 Oct 2009 - by Riccardo Pravettoni, UNEP/GRID-Arendal Larimichthys polyactis Catch in early 2000s and predicted Catch Shift (a) Current (early 2000s) and (b) climate-shifted distributions of the small yellow croaker Larimichthys polyactis (Sciaenidae). 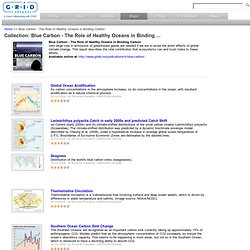 The climate-shifted distribution was predicted by a dynamic bioclimate envelope model described by Cheung et al. (2008), under a hypothetical increase in average global ocean temperature of 2.5°C. Seagrass Distribution of the world's blue carbon sinks (seagrasses). Thermohaline Circulation Thermohaline circulation is a 3-dimensional flow involving surface and deep ocean waters, which is driven by differences in water temperature and salinity.

Southern Ocean Carbon Sink Change. Tectonic Plates. The edges of these plates, where they move against each other, are sites of intense geologic activity, such as earthquakes, volcanoes, and mountain building. 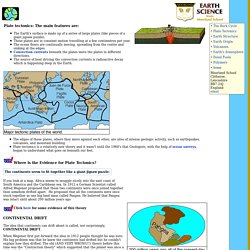 Plate tectonics is a relatively new theory and it wasn't until the 1960's that Geologists, with the help of ocean surveys, began to understand what goes on beneath our feet. Where is the Evidence for Plate Tectonics? It is hard to imagine that these great big solid slabs of rock could wander around the globe. Scientists needed a clue as to how the continents drifted.