Trans Men. Non Bianary. Journalism. Television. Movies. Video Games. In New York, Many in LGBT Community Hold Manning at a Distance. A transgender woman from the Bronx who spent three years in jail as a man has some advice for the Army intelligence officer formerly known as Bradley Manning: get counseling. 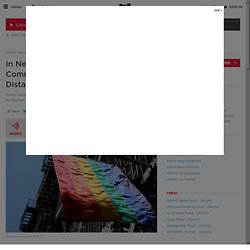 Nicole Aubry, 27, said she spent three years in counseling before she started hormones, and she’s concerned that Manning may be jumping into the decision to do so too quickly. "Transgender women don't go through it just like that,” she said outside the LGBT Community Center in Chelsea. “First you got to see a counselor, and then hormone treatments.” Following the news this week that Manning plans to live as a woman named Chelsea and begin hormone therapy, many worry about having such a divisive figure associated with the community in the spotlight. Manning, 25, was sentenced to 35 years in a military prison this week for leaking classified documents to the website WikiLeaks. RuPaul doesn’t live as a trans person, so quit asking him to comment on TG issues. RuPaul is a gay man, not transgender - and not a spokesperson for trans people. 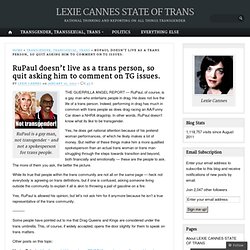 THE GUERRILLA ANGEL REPORT — RuPaul, of course, is a gay man who entertains people in drag. He does not live the life of a trans person. Indeed, performing in drag has much in common with trans people as does drag racing an AA/Funny Car down a NHRA dragstrip. Orange Is the New Black Humanizing the Transgender Community. Netflix, the popular Internet streaming media service that provides a list of free television and movie titles to its users, has found its newest success with their release of original works like the series drama, House of Cards. 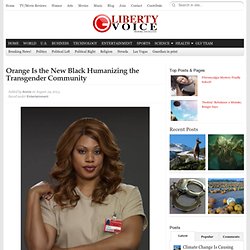 With the show up for a Most Outstanding Drama Emmy nomination next month, Netflix has kept this ambition going after premiering another hit original series, Orange Is the New Black. Proving to be a favorite amongst viewers and critics alike, the series has also gathered praise for tackling subject matters not typically portrayed accurately in the media. Sitting Down With Orange is the New Black Star Laverne Cox - Emertainment Monthly. Michelle Douvris and Sara Chaffee ’16 / Emertainment Monthly Staff Laverne Cox, star of the hit Netflix series Orange is the New Black and advocate for the transgender community, recently traveled to Boston to kick off Emerson College’s first Transgender Awareness Week. 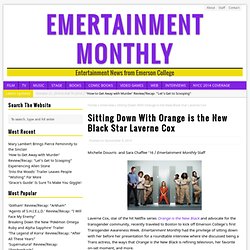 Emertainment Monthly had the privilege of sitting down with her before her presentation for a roundtable interview where she discussed being a Trans actress, the ways that Orange is the New Black is refining television, her favorite on-set moment, and more. Can you talk a little bit about the hybridity of fiction and nonfiction on Orange is the New Black and how it has affected your experience on the show? The Mask You Live In.

Analysis: Trans suicide and the way the media reports the trans community. Following the death of Lucy Meadows, Maeve Regan explores for PinkNews the impact of transphobic language in the media and the findings from the Trans Mental Health Study. 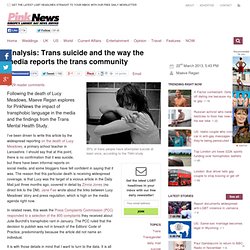 I’ve been driven to write this article by the widespread reporting on the death of Lucy Meadows, a primary school teacher in Lancashire. I should say that at this point, there is no confirmation that it was suicide, but there have been informal reports on social media, and some bloggers have felt confident in saying that it was. The reason that this particular death is receiving widespread coverage, is that Lucy was the target of a vicious article in the Daily Mail just three months ago, covered in detail by Zinnia Jones (no direct link to the DM). Jane Fae wrote about the links between Lucy Meadows’ story and press regulation, which is high on the media agenda right now. It is with those details in mind that I want to turn to the data. Transensation - Representation. 5 Shocking Realities of Being Transgender the Media Ignores. I bet that, for most of you, nothing would feel weirder than having your dad or brother tell you he's now a woman. 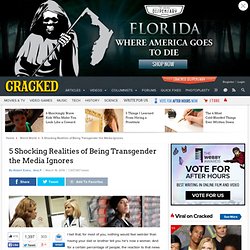 And for a certain percentage of people, the reaction to that news would be violent. The reality is that the entire concept of transgender people makes folks very uncomfortable, which means we're simply not talking about it enough. I'm Amy, a 20-something trans woman living in California. You probably think of this state as a place that prides itself on diversity, acceptance, and every other kind of happy buzzword, but even people here are filled with enough bad information on transgender issues to fill a fundamentalist hate tract. I used to believe most of this misinformation myself, but now that I've been out and open for a few years, there's some things I think everyone should know ... I'm writing a paper on the effects of media representation of trans* people. : asktransgender. The Pros and Cons of Media Visibility (discussion) : asktransgender. Changing the media's perspective on trans* people. : asktransgender. Discussing prejudicial stereotyping within the trans community. We are not all required to be activists representing trans people, and neither are we representative of all trans people just because we are trans people. : TransSpace.