Interview: Romy Madley Croft of the xx. FOR a band that trips ghostlike and lightly across the musical landscape, the xx are making a lot of noise in the right places, discovers Aidan Smith On A warm day underneath London Bridge, summer is still hanging around and so, too, is the Olympic spirit. 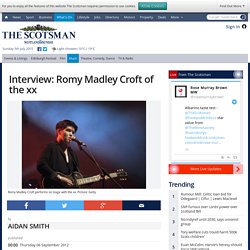 For, as she takes a break from rehearsals, Romy Madley Croft of the xx sounds like nothing so much as one of those polite, modest, can’t-quite-believe-it’s-just-happened Olympians. She uses the word “surreal” a lot, just as the athletes did, post-triumph, but her most recurring phrase is: “I’m so grateful”. She is so grateful, she says, for the success the band enjoyed with their self-titled debut album, a collection of slow, quiet, ghostly songs which seemed to strike a chord with the mood of the nation. “We were surprised and even shocked,” she says of the acclaim, which peaked with the Mercury Prize. She is so grateful for the opportunities the success has afforded them.

This is very much an xx ethic. Shy And Mighty. In late March, the xx, a band that ordinarily appears at ten-thousand-seat arenas, played a ten-night “residency” at the Park Avenue Armory, performing for just a few dozen people at a time. 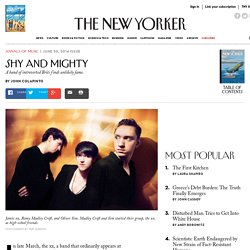 Open to the public for fifty-five dollars a ticket, the shows also drew the musicians Beyoncé, Jay Z, and Madonna, as well as the filmmakers Wes Anderson and Noah Baumbach. After assembling in a windowless storage area deep within the Armory, a former military headquarters on the Upper East Side, ticket-holders were led through tunnels to a small, square room, built around a shallow pit where three unsmiling figures stood in near darkness: the guitarist and singer Romy Madley Croft, with dyed black hair in a geometric cut that fell over one eye; the bassist and singer Oliver Sim, a tall man with a blond Tintin forelock; and the boyish-looking d.j. /drummer Jamie xx (né Smith), who stood behind a phalanx of samplers, keyboards, and percussion instruments. Romy Madley Croft is the xx's beating gay heart - AfterEllen. Let’s be real here: I knew Romy Madley Croft played for our team when I first saw her. 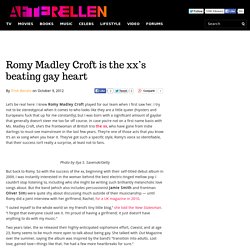 I try not to be stereotypical when it comes to who looks like they are a little queer (hipsters and Europeans fuck that up for me constantly), but I was born with a significant amount of gaydar that generally doesn’t steer me too far off course. In case you’re not on a first name basis with Ms. Madley Croft, she’s the frontwoman of British trio the xx, who have gone from indie darlings to must-see mainstream in the last few years. They’re one of those acts that you know it’s an xx song when you hear it. The sound of shyness. Putney Bridge, south London, December 2010. 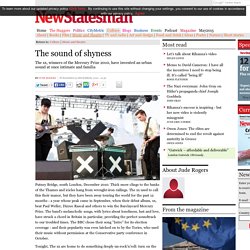 Thick snow clings to the banks of the Thames and icicles hang from wrought-iron railings. The xx used to call this their manor, but they have been away touring the world for the past 12 months - a year whose peak came in September, when their debut album, xx, beat Paul Weller, Dizzee Rascal and others to win the Barclaycard Mercury Prize. The band's melancholic songs, with lyrics about loneliness, lust and love, have struck a chord in Britain in particular, providing the perfect soundtrack to our troubled times. The BBC chose their song "Intro" for its election coverage - and their popularity was even latched on to by the Tories, who used their music without permission at the Conservative party conference in October.

Emile Haynie, Lykke Li, and The xx’s Romy Madley Croft team up on “Come Find Me” — listen. The xx interview - Romy Madley Croft and Oliver Sim (part 1) 808s & Heartbreak. Most pop stars under the age of 21 have some growing up to do. 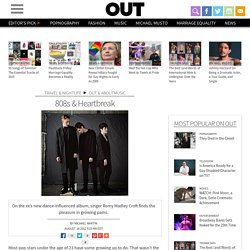 That wasn’t the case for the xx, a trio of young Brits who emerged with a perfectly formed sound on their brooding, excellent 2009 debut, xx. The winner of the U.K.’s Mercury Prize a year later, the album suggested that the group could well afford to remain in a state of artistic stasis. But after two years touring the world, the young miserablists are growing up, at least in some ways. “We’ve all just done that sort of transition into adults,” says singer-guitartist Romy Madley Croft, who recently turned 23. “Lost love, gained love—things like that. Romy Madley Croft on Genius. Romy Madley Croft. The xx: The UK's Shyest Pop Stars. Four years ago, a group of 20-year-olds from South London who craft quiet, soulful electronic music suddenly made a huge noise. 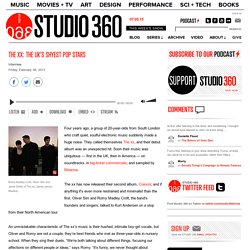 They called themselves The xx, and their debut album was an unexpected hit. Soon their music was ubiquitous — first in the UK, then in America — on soundtracks, in big-ticket commercials, and sampled by Rihanna. The xx's Romy Madley Croft: 'In Leeds, we had our first moshpit' Hi Romy, Coexist was voted No 8 on the Guardian's Albums of 2012. 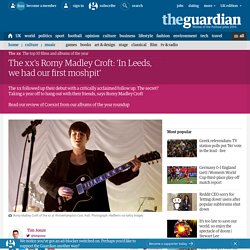 How does that feel? Oh great, thanks very much! What's your memory of recording it? Firstly, we all took a year off after coming back from touring and had a bit of a life – we moved out of our parents' houses and saw our friends and wrote a bit. Then we found a space we liked, put some equipment in there and spent about six months going there every day. Was it important to actually live a bit before making another album?

It really was, although it wasn't really an option not to. How did you feel when you finished it? We actually finished it about five times because Jamie [Smith] produced it and he's definitely a perfectionist! It's a refinement of your sound rather than a reinvention. Yeah, I suppose so. Before anybody had heard it there was talk – because of the stuff you'd been posting on your blog – that it might be a more dance-orientated record … How has 2012 been for you? Incredible. What was the best moment? Listen: CREEP With the xx's Romy Madley Croft. The xx: Black Is Black Is Black Is Black. They’ve always been together, these two. 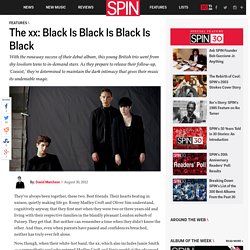 Best friends. Their hearts beating in unison, quietly making life go. Romy Madley Croft and Oliver Sim understand, cognitively anyway, that they first met when they were two or three years old and living with their respective families in the blandly pleasant London suburb of Putney. They get that. But neither can remember a time when they didn’t know the other. The PV Q&A: the xx's Romy Madley Croft On Matching Tattoos and Tragic, Failed Romances. Interview by Tom Lanham Since their Young Turks/XL bow xx was released three years ago, it’s been a vertigo-inducing ascent for English childhood chums the xx. 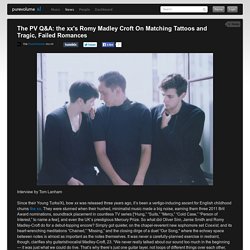 They were stunned when their hushed, minimalist music made a big noise, earning them three 2011 Brit Award nominations, soundtrack placement in countless TV series [“Hung,” “Suits,” “Mercy,” “Cold Case,” “Person of Interest,” to name a few], and even the UK’s prestigious Mercury Prize. So what did Oliver Sim, Jamie Smith and Romy Madley-Croft do for a debut-topping encore? Simply got quieter, on the chapel-reverent new sophomore set Coexist, and its heart-wrenching meditations “Chained,” “Missing,” and the closing dirge of a duet “Our Song," where the echoey space between notes is almost as important as the notes themselves. It was never a carefully-planned exercise in restraint, though, clarifies shy guitarist/vocalist Madley-Croft, 23.

PureVolume: So you actually all got ‘XX’ tattoos on your wrists at the same time recently? The xx's Romy Madley Croft talks Aaliyah, embracing large stages and more - tribunedigital-baltimoresun. Romy Madley-Croft. Romy Madley-Croft. The xx – Terminal 5 – August 2, 2012 The xx are one of those bands critics sometimes narrowly define by considering the ideal setting to listen to their music. 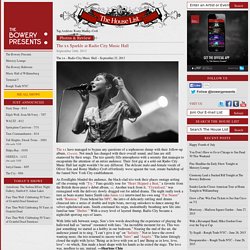 They are “music for the bedroom” or, even worse, “make-out music.” Either categorization is cringe-worthy, but it does beg the question of how the delicate minimalism of the xx can translate into a live setting, especially in a large venue like Terminal 5. With a new album on the way (Coexist comes out here on 9/11), the xx played a few shows in big U.S. cities before returning to Europe for a several more. And last night New York City was fortunate enough to be one of those cities, giving fans the chance to hear some of the new material as well as old favorites off the band’s instant-classic debut.

Emile Haynie Partners With Lykke Li & the xx’s Romy Madley Croft On “Come Find Me”: Listen. Romy Madley Croft's My London - ES Magazine - Life & Style - London Evening Standard. Best place for a first date? A walk along the South Bank. It’ll give you lots to talk about if you run out of anything else to say. First thing you do when you arrive home? Sleep for as long as possible and see the people I’ve missed. Last gig you saw? Jessie Ware at the Shepherd’s Bush Empire. Best place for a nightcap? La Bodega Negra in Soho. Favourite shops? Romy Madley Croft. Interview, Photos, Band, Music. Quietly confident … the xx - Jamie Smith, Romy Madley Croft and Oliver Sim - specialise in a low-key hushed delivery.

The xx - Oliver Sim, Romy Madley Croft, Jamie Smith Two of them met because their parents were friends. They were only two years old at the time. Maybe three. At that age, your parents choose your friends for you. Romy and I have a very strong relationship but it's not romantic at all.