Mental Illness & The Male Gaze – Anne Thériault. I have a very clear memory of the first time I recognized the Sexy Tragic Muse. 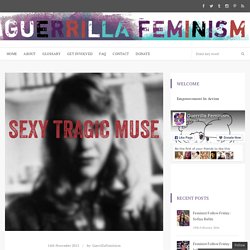 I was in my early 20s and living in ramshackle old wooden house in Halifax’s North End. A friend and I were chatting over MSN Messenger, which should give you an idea of what year it was. We were talking about music – part of a long and ongoing conversation about Songs That Really Get Me – and at some point she sent me a link to a YouTube video of Ryan Adams’ Sylvia Plath. It was the first Ryan Adams song that I’d ever heard; my friend had sent it to me because she knew I loved Plath and thought I would love the song too. 24 Actions You NEED to Take to Help Trans Women of Color Survive. Why is it always a white guy: The roots of modern, violent rage. Joe Stack had simply had enough. 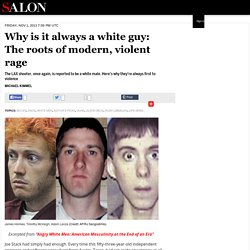 Every time this fifty-three-year-old independent engineer and software consultant from Austin, Texas, had set aside any money at all for retirement, the Internal Revenue Service (IRS) seemed to change the tax laws or whittled away at his earnings with new restrictions. A change in the income-tax regulations in 1986 had removed an exemption for software consultants and engineers, effectively consigning them, in his eyes, to low-income wage work. He just couldn’t catch a break. He’d moved from Los Angeles to Austin, remarried, hoping to get better contract consulting work, but the wages in Texas were paltry compared with Southern California.

Increasingly despairing that he would never get back on his feet, he began to see the IRS as an agent of discrimination against honest working people, while corporate fat cats got bailed out. The Top 50 White Guys Of 2015. 2015 was a landmark year for a lot of us, but let’s be honest: no one else quite dominated it the way only white guys can. 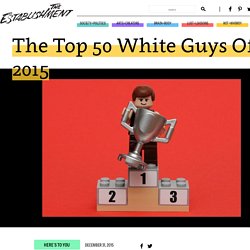 It was hard to narrow it down with so many great contenders, but here are 50 white guys who truly went the extra mile to make this past year so memorable. We toast your tirelessness, gentlemen! 1. Why intersectionality can’t wait. Mourners arrive to mourn the death of Sandra Bland at the DuPage African Methodist Episcopal Church in Lisle, Ill. 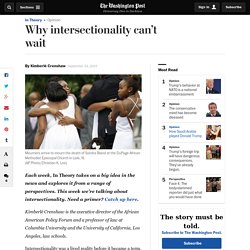 (AP Photo/Christian K. Lee) Each week, In Theory takes on a big idea in the news and explores it from a range of perspectives. This week we’re talking about intersectionality. Need a primer? Kimberlé Crenshaw is the executive director of the African American Policy Forum and a professor of law at Columbia University and the University of California, Los Angeles, law schools. Intersectionality was a lived reality before it became a term. opinions. Judith Butler’s Trouble: Why do white academics speak for trans people of colour? [CN: White privilege gone rampant] I am reeling after just reading a recent interview with so-called “the beloved philosopher and author of Gender Trouble” entitled Why Do Men Kill Trans Women? 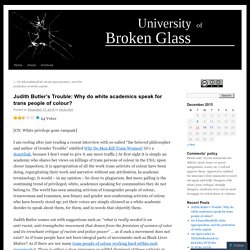 (it’s a donotlink, because I don’t want to give it any more traffic.) At first sight it is simply an academic who shares her views on killings of trans persons of colour in the USA; upon closer inspection, it is appropriation of all the work trans activists of colour have been doing, regurgitating their work and narrative without any attribution. In academic terminology, it would – in my opinion – be close to plagiarism. But more galling is the continuing trend of privileged, white, academics speaking for communities they do not belong to. Judith Butler comes out with suggestions such as: “what is really needed is an anti-racist, anti-transphobic movement that draws from the feminism of women of color and its trenchant critique of racism and police power” … as if such a movement does not exist?

Here Are 4 Ways to Navigate Whiteness and Feminism – Without Being a White Feminist (TM) Why the End of Michfest Is Good for Feminism: Two Activists Weigh In. Imagine a sun-soaked, leafy haven filled with women from all parts of the country. 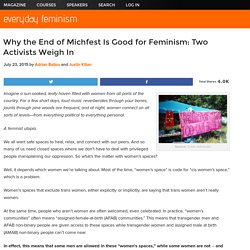 For a few short days, loud music reverberates through your bones, jaunts through pine woods are frequent, and at night, women connect on all sorts of levels—from everything political to everything personal. A feminist utopia. We all want safe spaces to heal, relax, and connect with our peers. And so many of us need closed spaces where we don’t have to deal with privileged people mansplaining our oppression. So what’s the matter with women’s spaces? The discomfiting truth about white feminism: Meryl Streep, Amy Poehler & the movement’s long history of racial insensitivity. After a very unfortunate joke about pedophilia and Blue Ivy Carter in the opening show of a new series produced by Amy Poehler, I waited for white feminists to speak up. 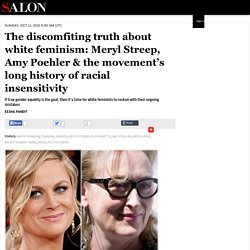 I waited for my feminist sisters who claim that feminism is indeed for more than just white women, to make the case about why the joke was in terrible taste, and that it would never have been made about a young white child. I waited for Amy Poehler, who I myself have genuinely admired for her politics and hilarious show “Parks & Rec,” to say something. I waited for the think pieces by white feminists calling for a reckoning of the unexamined racism inherent in the joke. I waited. And waited. This past week brought us the release of a new film about the movement for women’s right to the vote, “Suffragette.” In the early 1900s, white women in the US were fighting for the right to vote, with many racist values intact.

White Women, Please Don't Expect Me to Wipe Away Your Tears. Since the spate of murders by police of unarmed Black men, we are finally engaging in one of the most emotionally charged dialogues in this country, one we’ve long dreaded and therefore shirked: Americans are talking about race, and doing so as honestly as we can. 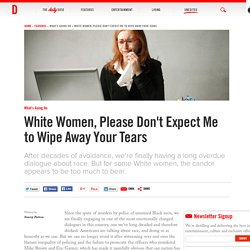 But we can no longer avoid it after witnessing over and over the blatant inequality of policing and the failure to prosecute the officers who murdered Mike Brown and Eric Garner, which has made it painfully obvious that our nation has deliberately failed to uphold its laws to protect all citizens equally. 5 Ways Taylor Swift Exemplifies White Feminism – And Why That's a Problem. Make no mistake: I love Taylor Swift. 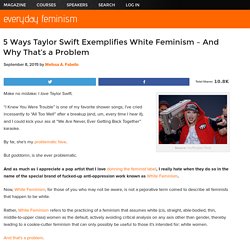 “I Knew You Were Trouble” is one of my favorite shower songs, I’ve cried incessantly to “All Too Well” after a breakup (and, um, every time I hear it), and I could kick your ass at “We Are Never, Ever Getting Back Together” karaoke. By far, she’s my problematic fave. But goddamn, is she ever problematic. How Feminism Continues to Fail Women of Color. A few years ago, I had a heated conversation with a very accomplished older white woman. 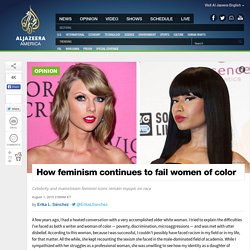 I tried to explain the difficulties I've faced as both a writer and woman of color — poverty, discrimination, microaggressions — and was met with utter disbelief. According to this woman, because I was successful, I couldn’t possibly have faced racism in my field or in my life, for that matter. All the while, she kept recounting the sexism she faced in the male-dominated field of academia. While I sympathized with her struggles as a professional woman, she was unwilling to see how my identity as a daughter of Mexican immigrants would pose obstacles for me. I grew exasperated trying to explain myself to her. Rallies Set Tuesday to Address Violence Against Black Trans Women. #BlackLivesMatter organizers will stand up for black transgender women and point out the wave of violence against this population with rallies around the country Tuesday.

Eighteen transgender people have been reported murdered this year, most of them black trans women, plus one victim whose gender identity is in dispute. That exceeds the number of reported murders of trans people in all of 2014, and does not include those whose deaths were not reported or investigated or those who have been misgendered by law enforcement and media. “We say the names of Mya Hall, Kandis Capri, Elisha Walker, Shade Shuler, Ashton O’Hara, India Clarke, Amber Monroe. We say the names of the black trans women whose lives have been cut short and demand that our cisgender family acknowledge that all black lives matter,” said Elle Hearns, Black Lives Matter strategic partner and GetEqual central regional coordinator, in a press release.

How Disablist Western Ideas of 'Self-Determination' Undermine Social Justice and 5 Ways to Make It Right. Originally published on stillmyrevolution and republished here with their permission. I am going to spend a lot of this post critiquing the idea of bodily self-determination, but this is not to say that I don’t think it is incredibly important.

I do. To White Feminists Who Don't Want to Discuss Racism: Here Are 7 Things You Need to Know. I used to roll my eyes and scroll past articles that talked about racism. 100+ LGBTQ Black Women You Should Know: The Epic Black History Month Megapost. Black lesbian, gay, bisexual, queer and transgender women represent a vibrant and visible portion of the LGBTQ community. In addition to the legends of the Harlem Renaissance and the decades of groundbreaking activism spearheaded by women like Audre Lorde, Barbara Smith and Angela Davis, many of the most prominent coming out stories of the past two years have been black women like Brittney Griner, Raven-Symonè, Diana King and Robin Roberts. Meanwhile, Laverne Cox and Janet Mock have become the most visible transgender women in media. So, in honor of Black History Month, below you’ll find over 100 lesbian, bisexual, gay, queer and transgender women you should know about.

If she was still alive, the oldest person in this list would be 189 years old. The youngest person on this list is a mere 21 years of age. Keep in mind, there are so many more prominent black LGBT women than are represented below. Frances E.W. Edmonia “Wildfire” Lewis (1844-1907), Sculptor Ruth Ellis (1899-2000), Activist. Why I’m Absolutely an Angry Black Woman. Why I’m Absolutely an Angry Black Woman Photo by Femi Matti Because when I was five, my kindergarten classmate told me I couldn’t be the princess in the game we were playing because black girls couldn’t be princesses.

Women of Color, in Solidarity. What trans people of color fear after the Bruce Jenner media circus. The problem regarding Bruce Jenner’s situation is the media circus that it all culminates into. Interrogating Intersectionality; and Julia Serano’s ‘Excluded’ Note A: Throughout this essay I refer to the dominant, feminist mainstream as “White Feminism”. Casey reviews Excluded by Julia Serano.

Here's Why Suicide Prevention in the Black Community Is of Critical Importance. (Content Warning: suicide) Originally published on For Harriet and republished here with their permission. Black Girls Don't Get to Be Depressed. These Mental Health Myths Harm the Asian American and Pacific Islander Communities. Originally published on The Body is Not An Apology and cross-posted here with their permission.