A Quick Word From Lucifer On Cultural Appropriation  Greetings and salutations my sweet minions of darkness, my spicy little cornichons of cruelty and malevolence. 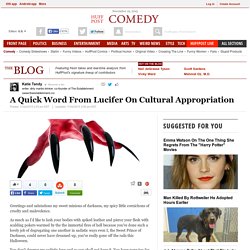 As much as I'd like to lash your bodies with spiked leather and pierce your flesh with scalding pokers warmed by the the immortal fires of hell because you've done such a lovely job of degregating one another in sadistic ways even I, the Sweet Prince of Darkness, could never have dreamed up, you've really gone off the rails this Halloween. You don't deserve my sadistic love and so you shall not have it. You have gone too far. Did you truly think I would never find out? That my winged servants of the night wouldn't catch wind of your transgressions?

Forgive me. There has been a lot of talk lately about cultural appropriation and costumes. I think you imbecilic meat-hunks need to ratchet your perspective here. The REAL sin here--if you will--is the appropriation of moi, Satan. These people are not so peachy--in fact they're shitbags. Oh, and Japanese geishas?! I mean, gross. How to Dress as a Trans Person for Halloween  It's my favorite time of year again. 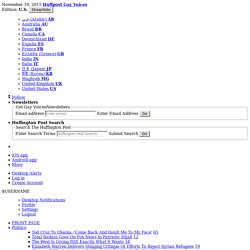 Halloween. I love everything about it. The sales, the costumes, the tacky pumpkin carvings and the decorative gourds. Your Guide to Avoiding Cultural Appropriation  As I stated before, cultural appropriation isn't about Kylie Jenner wearing cornrows. 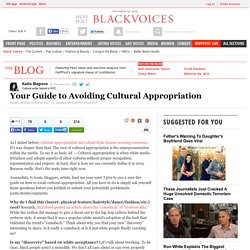 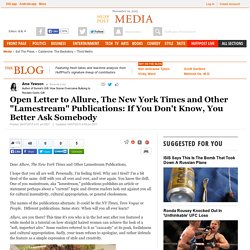 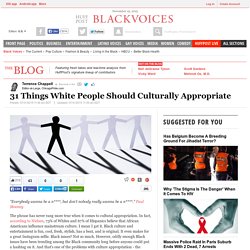 " Paul Mooney The phrase has never rang more true when it comes to cultural appropriation. In fact, according to Nielsen, 73% of Whites and 67% of Hispanics believe that African Americans influence mainstream culture. Why Trans People Need to Be Involved in Telling Trans Stories  In 2014, Jared Leto received an Oscar for portraying a transgender woman in Dallas Buyers Club. 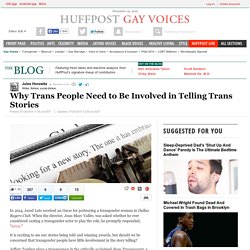 When the director, Jean-Marc Vallée, was asked whether he ever considered casting a transgender actor to play the role, he promptly responded, "never. " It is exciting to see our stories being told and winning awards, but should we be concerned that transgender people have little involvement in the story telling? Jeffery Tambor plays a transwoman in the critically acclaimed show Transparent, a series that has brought national attention to transgender issues. This begs the question: is any and all publicity beneficial since it is raising awareness about transgender identities, or are there issues with cisgender people (i.e. people who do not identify as transgender) portraying a transgender narrative?

To be honest, I don't usually get involved in this debate. A few months ago, I was asked to participate in a photo shoot that would highlight the beauty and vulnerability of transgender identities. 'Whiteness Goggles' Set Out To Change How You See Cultural Appropriation. Cultural Appropriation Isn't Okay, Neither is Attacking Kids  Andy Cohen is messy. 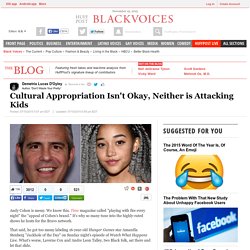 We know this. Time magazine called "playing with fire every night" the "appeal of Cohen's brand. " It's why so many tune into the highly-rated shows he hosts for the Bravo network. That said, he got too messy labeling 16-year-old Hunger Games star Amandla Stenberg "Jackhole of the Day" on Sunday night's episode of Watch What Happens Live. What's worse, Laverne Cox and Andre Leon Talley, two Black folk, sat there and let that slide.

Cultural Appropriation: It's Not About Kylie Jenner's Braids  Cultural appropriation has been a real hot topic lately, but I wouldn't say that this most-talked-about issue is totally understood by all. 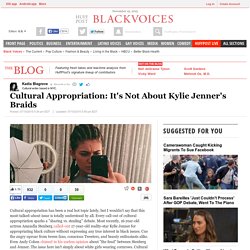 Every call-out of cultural appropriation sparks a "sharing vs. stealing" debate. Most recently, 16-year-old actress Amandla Stenberg called-out 17-year-old reality-star Kylie Jenner for appropriating black culture without expressing any true interest in black issues. Cue the angry uproar from tween fans, conscious Tweeters, and beauty enthusiasts alike. Even Andy Cohen chimed in his useless opinion about "the feud" between Stenberg and Jenner. The issue here isn't simply about white girls wearing cornrows. Laverne Cox: 10 Seconds Isn't Enough To Unpack Cultural Appropriation. Making Modesty Acceptable  When Kendall Jenner decides to wear pants with a dress, she makes a statement about the way modest apparel, and indeed cultural dress in general, is perceived based upon the wearer. 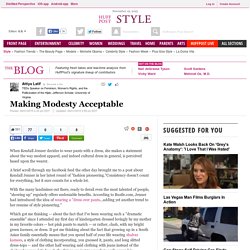 A brief scroll through my facebook feed the other day brought me to a post about Kendall Jenner in her latest round of "fashion pioneering. "Consistency doesn't count for everything, but it sure counts for a whole lot. With the many landmines out there, ready to derail even the most talented of people, "showing up" regularly offers undeniable benefits. According to Bustle.com, Jenner had introduced the idea of wearing a "dress over pants...adding yet another trend to her resume of style pioneering.

" Which got me thinking -- about the fact that I've been wearing such a "dramatic ensemble" since I attended my first day of kindergarten dressed lovingly by my mother in my favorite colors -- hot pink pants to match -- or rather, clash, with my bright green kamees, or dress. Why (Another) Urban Outfitters Fiasco Still Makes Me Angry  Oh, Urban Outfitters, why haven't you learned? 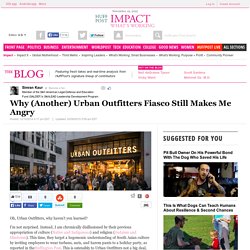 I'm not surprised. Instead, I am chronically disillusioned by their previous appropriation of culture (Native and Indigenous) and religion (Judaism and Hinduism). This time, they target a hegemonic understanding of South Asian culture by inviting employees to wear turbans, saris, and harem pants to a holiday party, as reported in theHuffington Post. This is ostensibly to Urban Outfitters not a big deal, rather another symptom of systemic, insidious racism. All Appropriation Everything: IHOP Joins List of Cultural-Appropriation Offenders

Over the last few months, corporations have found a new way to gain attention on Twitter: tweeting rap lyrics and other allusions to hip-hop culture. The culprit that has most popularly surfaced across Twitter timelines is IHOP, which tweets edited versions of lyrics from songs by artists such as Drake, Trinidad James, and Bobby Shmurda. While most Twitter users replied with amusement, some appear to be irritated and disturbed by IHOP using hip-hop lyrics to promote itself on Twitter. 3 Ways You Can Promote Inclusiveness This Halloween  This Halloween, it's time for us to ditch the kimono, the sari and the mariachi suit. During the beginning of my senior year, my school decided to host a "Cowboys and Indians" dress up day event as a welcoming event for new and returning students. To the blind eye, this seems like a great event. We're based in Norco, colloquially called "Horsetown U.S.A," so to many, the event seemed like a perfect fit for the culture of the school.

However, what many failed to see between the lines was a perpetration of cultural appropriation, prejudices and the overwhelming stereotypes associated with cowboys and Native Americans. Being part Native American, I took great offense to the creation of the event. Such is the case for many Halloween costumes. HBO Offends Entire Country After 'Jonah From Tonga' Uses Brownface.

Listen up: Not only is the use of blackface not OK, neither is any other kind of cultural appropriation. Everyone should know that by now. But there's one guy who really, really doesn't get it. Chris Lilley, a comedian, director and writer from Australia, has donned -- and received criticism for -- blackface, yellowface and, now, brownface in the form of HBO's new show, "Jonah from Tonga" -- written by and starring the controversial comedian himself.

Regarding Culture Thieves  "Diversity requires mutual respect, not jealous ranking of oppressions. " Sierra Mannie, a University of Mississippi senior, wrote a commentary picked up by Time last week titled, "Dear White Gays: Stop Stealing Black Female Culture. " Here's a portion: I need some of you to cut it the hell out. ... I don't care ... how cute you think it is to call yourself a strong black woman, who taught you to twerk, how funny you think it is to call yourself Quita or Keisha or for which black male you've been bottoming -- you are not a black woman, and you do not get to claim either blackness or womanhood. Someone was looking for a throwdown. The Startlingly Profound (Yet Simple) Question My Daughter Asked About Racism  We've been fighting song #19 ever since we got Mickey Mouse's greatest hits CD. No matter how quickly we hit "skip" when song #18 is over, I should have known it was inevitable we'd lose at some point.

But when I heard our 5-year-old singing "one little, two little, three little indians," my heart sank anyways. (Yes, "indians," not capitalized on purpose. Let's be really clear: The song's not about actual, real Native peoples or Indians, not about real people.) I waited a bit to engage her. (One thing I learned from The First "R" is how young kids are when they realize that certain ways they "do" race are taboo and end up getting them shamed by adults. 2013 Was The Year Of Cultural Appropriation. To be honest, 2013 was a tough year for black folks. Cultural Appropriation: The Act of Stealing and Corrupting  A person's cultural identity forms one of the most important and most vulnerable parts of who they are. We tend to define ourselves by what we believe, and the way we express our beliefs is through certain symbols that are generally representative of our culture. With culture comes a sense of identity, a sense of self, and when our culture is stolen from us, there is this deep sense of loss.

Cultural Appropriation 101, Featuring Geisha Katy Perry And The Great Wave Of Asian Influence. Last night, Katy Perry opened the American Music Awards with a rendition of "Unconditionally" that appeared to be, well, "geisha-inspired" -- a confusingly executed theme, which included cherry blossoms, The Great Wave off Kanagawa and a Chinese fan dance performed by kimono-clad women who were seemingly neither Chinese nor Japanese. In other words, the performance seemed to "unconditionally" pull influences from across the Eastern continent, much like the Asian food stands in most American malls. Buried in the Sand: The Secret Politics of <i>Blue Is the Warmest Color</i>  Abdellatif Kechiche's Palmes d'or winning film, Blue is the Warmest Color, has widely been touted for its unabashed erotica and its natural and earnest portrayal of a lesbian love affair.

At first glance, it seems the taboo-breaking work of a cinema provocateur. (EM)I Has a Dream  August 28th, 2013 is the 50th anniversary of Martin Luther King's "I Have a Dream" speech. The copyright in the speech is administered by EMI, with the consent of the King family. Thus the speech may not be freely played on video or reproduced and costlessly distributed across the nation -- even today. Its transient appearance depends on the copyright owner's momentary sufferance, not public right. It may disappear from your video library tomorrow. My Tirade Against Hipsters  I know enough has been written about hipsters, but please humor me, for I had not had the opportunity to chime in. Being Part of Everyone's Furniture; Or: Appropriate Away!  For I come from an ardent race that has subsisted on defiance and visions. Two weeks ago, I was too tired to undertake the one-hour drive home after staying late in the lab.

Zendaya Talks Race and Cultural Appropriation: I Have Pride in Knowing That I'm an African American.