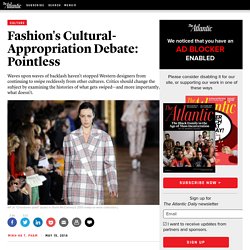 These writings have been published in scholarly journals and popular media sites, including the research blog I co-founded called Threadbared. Don't Mess Up When You Dress Up: Cultural Appropriation and Costumes. I don't think the author was suggesting that ALL white people think that Dia de los Muertos is "Mexican Halloween," but a large number do. 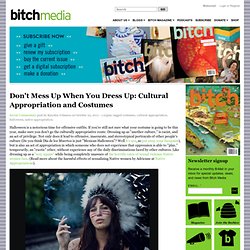 Not everyone grew up in L.A. surrounded by first- and second-generation Mexican and Central American friends, like you did. But I think it's really, really important to keep this in mind: ... "but is also an act of appropriation in which someone who does not experience that oppression is able to "play," temporarily, an "exotic" other, without experience any of the daily discriminations faced by other cultures. " [from the first paragraph.] Culture is Not Costume: Why Non-Africans Should Not Wear African Clothing. Photo Credit: Zadi Araka/Deposit Photos by Nneka M. 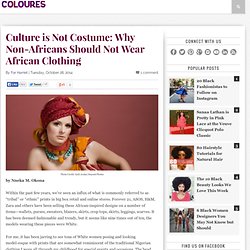 Okona Within the past few years, we’ve seen an influx of what is commonly referred to as “tribal” or “ethnic” prints in big box retail and online stores. Forever 21, ASOS, H&M, Zara and others have been selling these African-inspired designs on a number of items—wallets, purses, sweaters, blazers, skirts, crop tops, skirts, leggings, scarves. It has been deemed fashionable and trendy, but it seems like nine times out of ten, the models wearing these pieces were White.

As if my culture, my heritage—something that has gone back thousands of years—came with a price tag and could be tried on for one’s own liking. Cultural appropriation is not my main issue with non-Black women (and to be honest, Black American women as well) choosing to relish in headwraps and funky prints that draw their inspiration from the Motherland—although, of course that’s a huge one. For those of us who are African, we realize how silly this notion is. Nneka M. KTZ Appropriates Native American Culture at Fashion Week. LINKAGE: The Feather In Your “Native” Cap. Hipster headress from Urban Outfitters In the last few weeks, several writers have tackled the concatenation of concerns surrounding “native appropriations” in so-called hipster fashions. 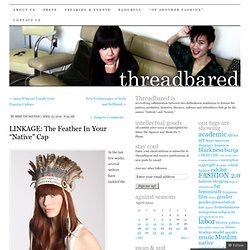 (Feathered headdresses, for example, are among the latest accessories for sale by retailers such as usual suspects Urban Outfitters. For not-equivalent-but-possibly-relevant commentary, see my “History and the Harem Pant,” or Minh-Ha’s “Blackface, and the Violence of Revulsion.”) Neither of us are able to comment at length right now because we’re both on our separate ways out of town (having said that, one of the first things I would do is explore the difference between an analytic of appropriation as a property relation and an analytic of alienation as a social-historical one, in response to the many comments to these posts that protest that indigenous peoples do not have a “monopoly” on feathers), but I thought I would bookmark these writers for our readers’ perusal.

Cultural Appropriation: The Fashionable Face of Racism. By Chimene Suleyman There is a painting in my parent’s house that my mother made. 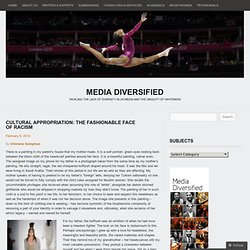 It is a self portrait; green eyes looking back between the black cloth of the headscarf painted around her face. It is a beautiful painting, carnal even. The assigned image on my phone for my father is a photograph taken from the same time as my mother’s painting. He sits straight, regal, the red chequered keffiyeh draped around his head. Nicholas K’s Spring 2014 Collection For my father, the keffiyeh was an emblem of when he had once been a freedom fighter. Why Headdress Is Not a Halloween Costume: Yahoo! Style Canada Nails It. Yahoo! 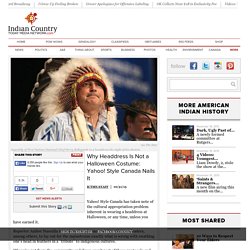 Style Canada has taken note of the cultural appropriation problem inherent in wearing a headdress at Halloween, or any time, unless you have earned it. Reporter Amber Nasrulla interviewed academics and First Nations leaders, among others, to lay out for the mainstream exactly what is wrong with swathing one’s head in feathers in a “tribute” to indigenous cultures. “If you’re not from the community and if you aren’t part of those protocols and you’re whipping this [headdress] out to look colorful or quaint or rebellious, you’re actually exercising a particular kind of settler privilege that is, at its heart, violent. And deeply disrespectful,” said Daniel Justice, head of the First Nations and Indigenous Studies Program at the University of British Columbia, to Yahoo! Style Canada. RELATED: 13 Rock Stars Who've Worn Native Headdresses (and Probably Shouldn't Have) Keene: Forever 21 Sells Headdress, Again. Five years ago, I wrote a post entitled, “But why can’t I wear a hipster headdress?” 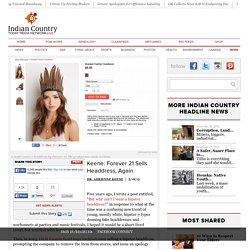 In response to what at the time was a confusing new trend of young, mostly white, hipster-y types donning fake headdresses and warbonnets at parties and music festivals. I hoped it would be a short-lived trend, but watched with horror as it only grew. Then, in 2013, H&M Canada faced huge backlash over selling a hipster headdress, prompting the company to remove the item from stores, and issue an apology. A headdress by clothing retailer H&M. So imagine my surprise when this week a reader sent me a link to Forever 21, who is now selling a “boho-inspired” headdress on their American site. The “you may also like” section along the side of the page when viewing the headdress offers three flower crowns in varying shades.

Flower crowns by clothing retailer Forever 21. Which, to me, points to the crux of this issue. Dr. Dr. High Fashion Uses Native Artist's Work. “What happens when a major Fashion House actually collaborates with an Indigenous Artist? 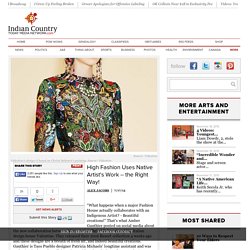 - Beautiful creations!” That’s what Amber Gauthier posted on social media about the new collaboration between Metis Artist Christi Belcourt and big Italian design house Valentino. They released their 2016 Resort collection 4 weeks ago and these designs are a breath of fresh air, and indeed beautiful creations. Gauthier is Taos Pueblo designer Patricia Michaels’ longtime assistant and was enthusiastic about the collaboration. Is This The Right Way For Fashion To Do Cultural Appropriation?